From this question regarding flatworms remembering things experienced by other flatworms they have eaten, there was a quote on this page regarding another memory transfer mechanism:

the reports of transplant patients having memories related to the donors are legion.

Also see this link on naturalnews.com, this one on skepdic.com and this paper from Montgomery College.

Can it be true that memories are somehow carried within transplanted organs?

One can't examine this claim without addressing the purported idea of "cellular memory" a topic already dealt with very nicely at the skeptic's dictionary. And by Suma in the flatworms question.

There is simply no scientific reason to think that somehow memories of one person are stored in cells and can be passed from one person to another during transplantation. There is not even a scientifically theorized mechanism by which it could happen. The claim remains purely pseudoscientific and proponents often rely on anecdotes, coincidence, and anomaly hunting to make their case.

First, if such a thing were true, I might call attention to the problems which would be faced by the following people:

and of course, the comically terrifying applications it would have considering this...

Obviously, receiving a life-saving or life-changing organ transplant has profound physiological, social and psychological effects on a person.

An organ transplant is a life-altering experience, literally. In many cases, it might well be compared to the near-death experience since many transplants are done only if death is imminent. It should not be surprising to find that many transplant recipients change significantly. Some of these changes might easily be interpreted as being consistent with the donor's likes and dislikes or behaviors. Recipients would want to know about their donor and might consciously or unconsciously be influenced by stories about the person who now "lives inside them." source

It's not surprising how many people could conceivably interpret a mystical significance to some of the changes they are experiencing, but as we can see, changes are normal after such a procedure, even ones the general public might not expect, such as "memory improvement following cardiac transplantation"

Of course it's quite tempting to think simply that the transplanted heart might have come from a very intelligent person, especially if it did happen to come from an individual with above average intelligence.

the 73 cases Pearsall lists in his book (cited in the question) seem even less compelling. Especially since he has had some noted "credibility" issues in the past

Dr Pearsall claims that he is “Fully licensed and board certified clinical neuropsychologist, License Number 000773″ Even better, the American Board of Clinical Neuropsychology lists all its members and guess what, under ‘P’ for Pearsall, no-one of that name exists. source

I certainly wouldn't say these claims are "legion". But of course, you can try to stretch the data that way if you keep the claims vague and apply them to subjective things like "developing tastes" or "artistic capability" such as the case of William Sheridan.

William Sheridan's drawing skills were stuck at nursery level. His stick figures were the sort you would expect of a child. But as he convalesced after a heart transplant operation, he experienced an astonishing revelation

I'd say that's subjective, as his art went from this.... 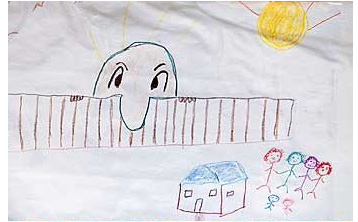 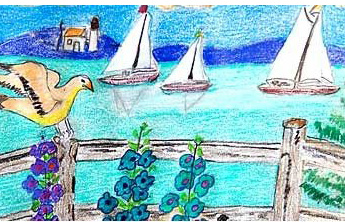 which could likely be explained by any number of natural mechanisms, such as having more time to practice drawing while recovering, or even perhaps as a result of the increase in cognitive function seen in some heart transplant patients as I noted above.

With regard to the much more widely-known case of Claire Sylvia, one needs only to look at the words of William Novak, one of her supporters....

"The point is that Claire is not claiming that you take on the entire personality of the donor, just fragments that come through. One of the things I like about her is that she doesn't make grand, sweeping, hard to believe claims. She doesn't claim she is two people at once, but she does believe that something unusual has happened" source

He is absolutely correct, something unusual did happen. Claire Sylvia was the first woman in New England to successfully undergo a heart-lung transplant. It's easy to see how her entire case could get blown out of proportion, especially given the media's tendency to report "the miracles of modern medicine" as simply "miracles".

Sylvia, 47, was dying from pulmonary hypertension — a disease that increases the body's blood pressure in the lung vasculature and most often leads to death — in 1988 when she became the first person in New England to have a heart-lung transplant. source

and as such, she was given some attention from the media,and anything she said was almost guaranteed an audience.

Because I was the first person in the state to have such an operation, there was a lot of publicity, and two reporters came to the hospital to interview me.source

It's also very possible that the life and death of the donor could have received equal attention from the journalists, even if it was not equally reported. This could quite logically have caused Sylvia to be exposed to leading questions from journalists who had already researched the life and death of Tim Lamirande. The always-tragic motorcycle crash death of an 18 year old boy is likely to make the news, let alone when it becomes intertwined with a medical "breakthrough" such as this. But that's just one explanation that doesn't resort immediately to mystical thinking.

16
Cellular Memory: Memory Transfer Between Organ Transplants
35
Can flatworms learn a maze by digesting other flatworms?

16
Do physicians that use the paradigm of evidence-based medicine achieve better health outcomes for their patients?
12
Can you remember specific things you learn in the womb?
29
Can ants lift 50 times their weight?
9
Can martial artists strengthen limbs, appendages, and other parts of their bodies to “super-human” degrees?
16
Can a person forget their own name?
37
Can you punch someone's nose into their brain?
3
Are medics often incapable of understanding or communicating statistical results to their patients?