Do the symptoms of autism resemble mercury poisoning?

This prevalent meme image claims that mercury poisoning and autism have similar symptoms. (Presumably it is intended to imply that vaccines containing mercury cause autism, but that isn't what this question is asking.) 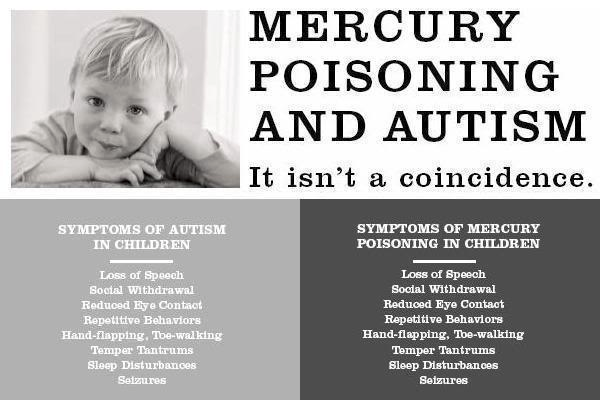 Mercury poisoning and autism. It isn't a coincidence.

The major symptoms of chronic mercury poisoning in children, according to the Centers for Disease Control:

I suppose the personality changes could include the list on that image, but it entirely omits the neuromuscular problems, which are at least as prominent. It also lumps together two very different things under "loss of speech": mercury poisoning's speech impairment shows up as difficulty forming sounds, while autism's is at the level of words and sentences.

In short, to get that list of "symptoms of mercury poisoning in children", you need to ignore about half the symptoms, and distort the other half.

29
Is there an autism epidemic?
13
Is Chelation therapy effective for autism?
27
Can "breatharians" live without food or water?
10
Does elemental mercury give off toxic vapor?
10
Is there a link between mercury poisoning and attention deficits in children?
4
Does circumcision cause autism?
4
Can mercury inhalation from dental amalgams cause Alzheimer's disease?