"Sadly, protesters interfered with supporters, even blocking access to the metal detectors, which prevented people from entering the rally," Tim Murtaugh, the campaign's communications director, said in a statement.

Is there any proof of this statement? If true, it might explain the low turnout, when Trump claimed that 1,000,000 had requested tickets.

Does anyone know where said metal detectors were located? I might expect them to be at the entrance to the arena, but that would not explain how

So few people turned up that a speech the US president was meant to give to an outside "overflow" stage before the main event for those who could not get in was cancelled at the last minute.

Other than assertions to that effect by the Trump Administration, there is no evidence of this. However there is very strong evidence that it did not happen.

There are a fair amount of pictures of the outside of the BOK Center during the time in question. They pretty much all show just a small crowd.

As a bit of background, I'm a Tulsan who has attended multiple events at the BOK in the past. In every instance, the metal detectors were just inside the main doors. However, it appears that for this event they were expecting a large enough crowd that a cordon of barricades was erected around the area, with the entrance controlled by metal detectors and a temperature taking station.

Here are a couple of pictures of that station, taken by Tulsa World reporter Samantha Vicent, and posted on Twitter: 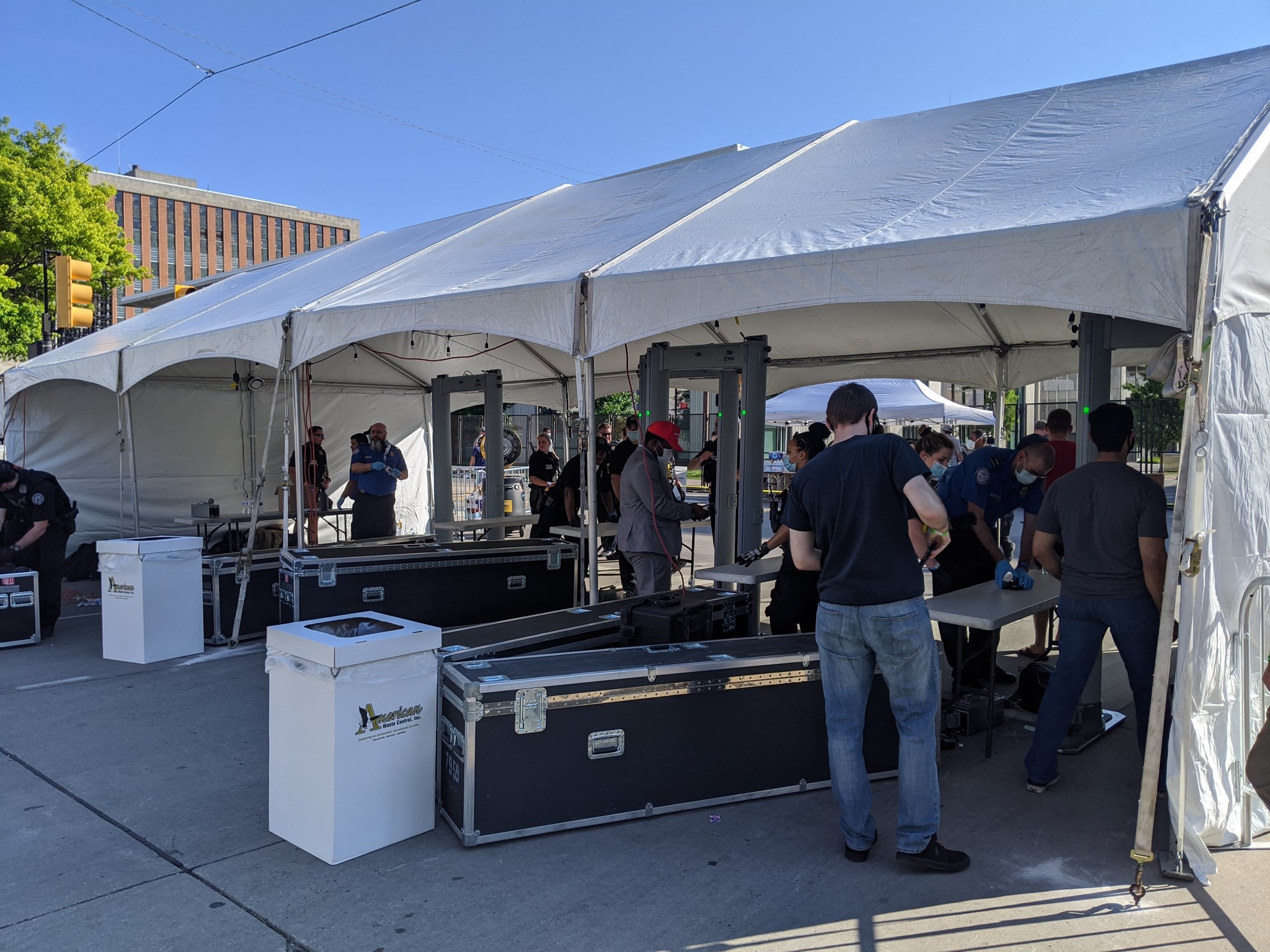 This one pretty clearly shows there wasn't really any line at all for the metal detectors.

Here's another that she confirmed was taken from outside the cordon looking toward the detector station (she was not allowed in due to carrying a backpack). There is no line or protestors visible for quite a distance. 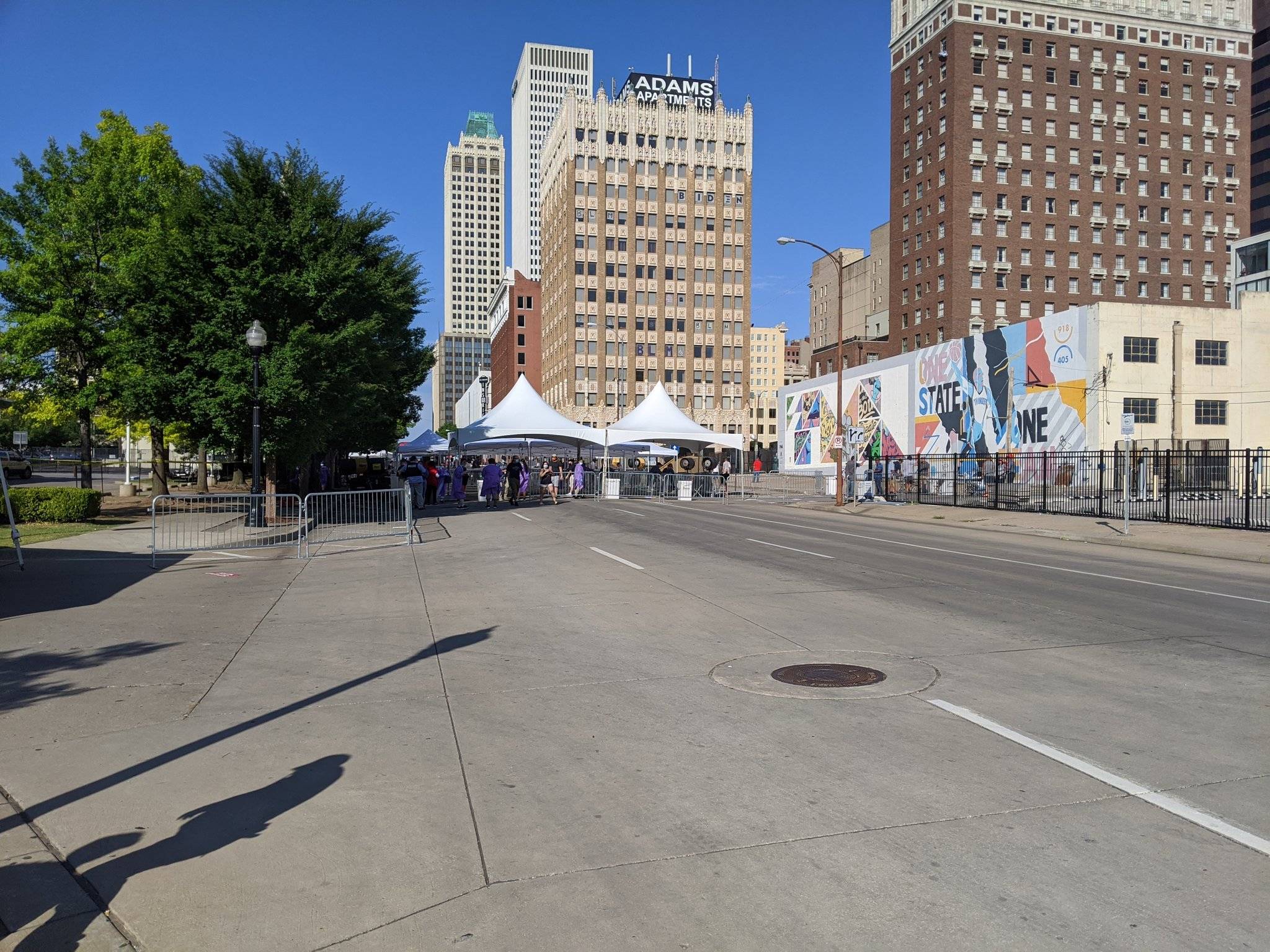 Here's a cap of some on-the-ground reporting from David Weigel of the Washington Post stating that protestors were remarkable mostly by their absence, and protestors were in fact being kept very far away: 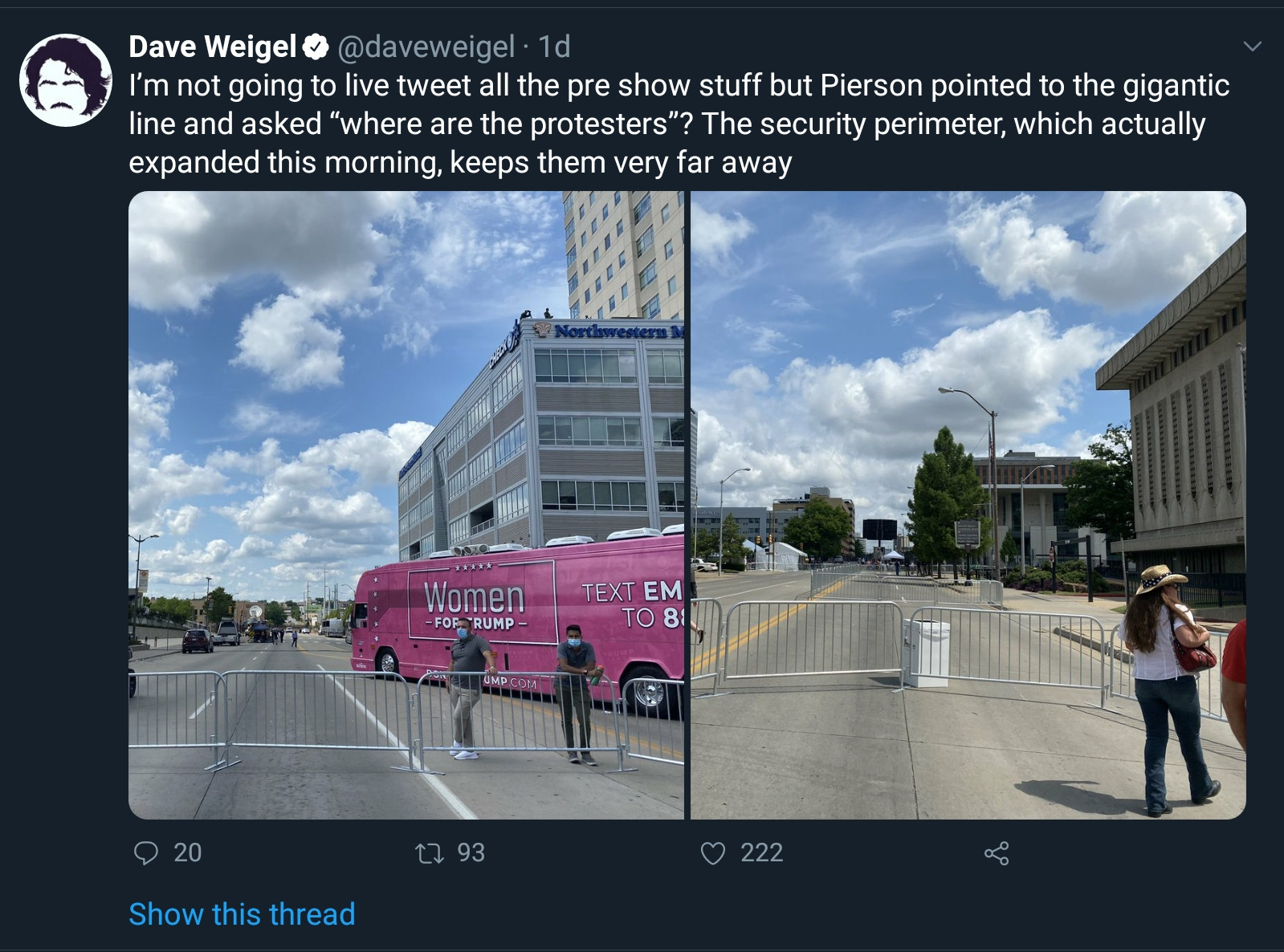 Here's another picture and story showing that a couple arriving late had no trouble whatsoever getting in. 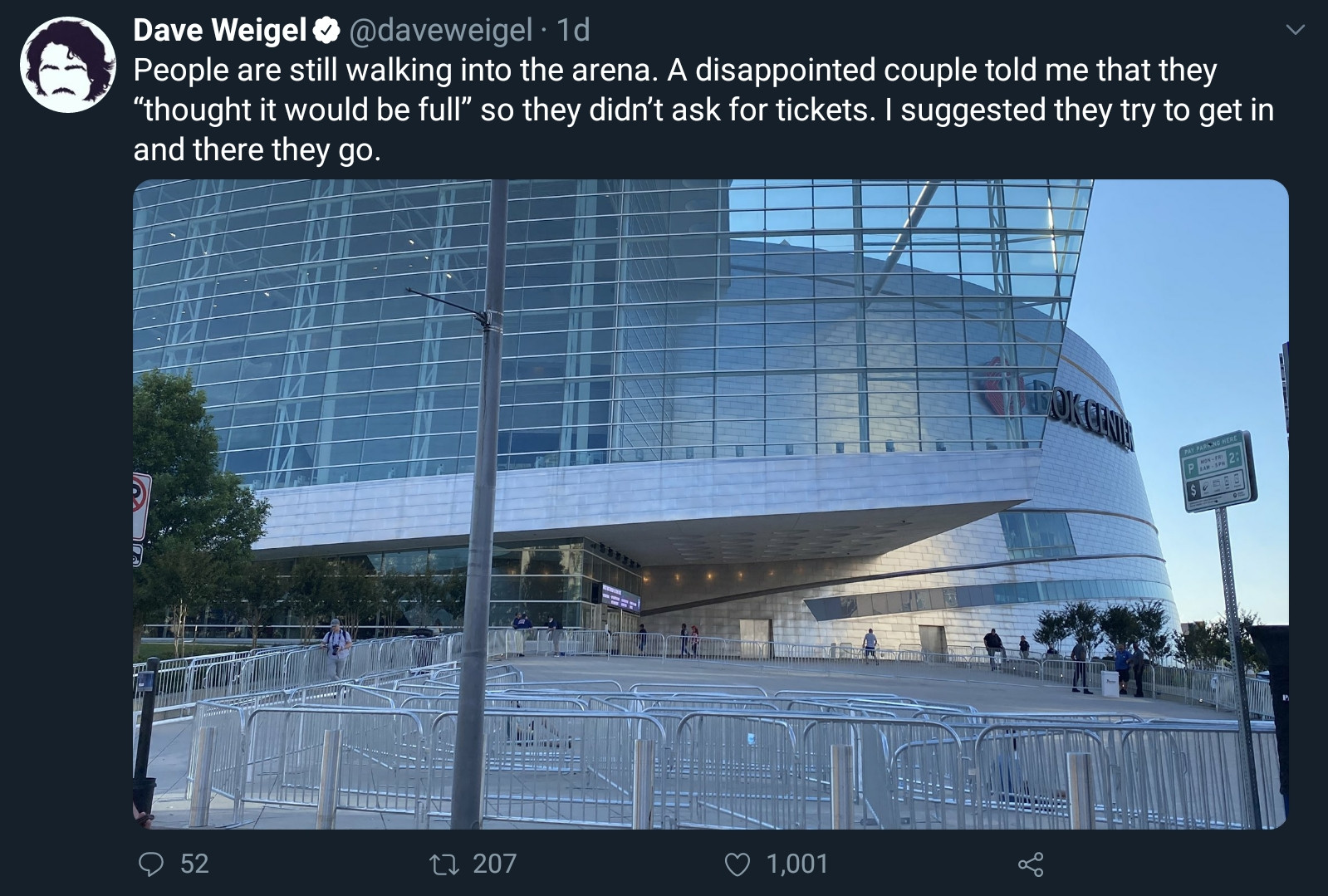 Weigel also posted a video here showing the outdoor "overflow" stage, and a smallish glob of red-hatted folks lined up to enter (the big glass building is the BOK). Here's another showing people entering, with nowhere near the kind of line the routing barriers seemed to be anticipating.

So there was no big backup of frustrated prospective attendees hoping to get in. Multiple journalists working the event reported that latecomers had no trouble whatsoever walking up and getting in. There is also no sign whatsoever of any protestors or anyone being disruptive in any way.

Another good thing to look at would be arrest records at the event. It turns out there was one protestor arrested for obstructing the rally. One. Here's her story:

Buck put on her black “I Can’t Breathe” shirt and walked to the barricade near the BOK, where she said security let her through. She said she didn’t make it far, though, as Trump campaign folks quickly swarmed her.

“I was surrounded and was told I could not go any further and that I was trespassing on a private event and I wasn’t wanted there,” Buck said. “And I said, ‘This is my town; this is my city. I’m a citizen of the United States of America.’

“And I was just praying as people were looking at me. And I realized they were going to arrest me.”

Buck said she kept reiterating that she had a ticket but that Trump’s campaign people wanted her to walk out. She said she sat down on the ground because she wasn’t going to walk away.

To be clear, Buck had made it in past the metal detectors, and was arrested for "obstruction" (which seemed to involve sitting down) inside the cordon.

Finally, the main person making this claim in the first place, Brad Parscale, has now completely changed his story, and as of this writing is claiming it was actually the Tulsa Police who kept Trump supporters away. Whatever the merits of that claim may be, it is pretty clearly a different and incompatible claim.

In an interview, Mr. Parscale said the empty arena was not his fault, and that local law enforcement in Tulsa had overreacted, making it difficult for supporters to gain entry. He claimed to have thousands of emails from supporters who tried to get into the Bank of Oklahoma Center and were turned away, but he did not share those messages or names of supporters.

It is always hard to find proof of a negative. If the excuse were true, then the Trump Administration would have spread the evidence far and wide. Perhaps someone can post it if so. The closest I can find is coverage of the rally by the Star Tribune. It acknowledges that there were protesters in Tulsa:

Hundreds of demonstrators flooded the city's downtown streets and blocked traffic at times, but police reported just a handful of arrests. Many of the marchers chanted, and some occasionally got into shouting matches with Trump supporters, who outnumbered them and yelled, "All lives matter."

There follows more detail about protest, some peaceful, some more violent, and about the actual entrance to the venue:

Trump campaign officials said protesters prevented the president's supporters from entering the stadium. Three Associated Press journalists reporting in Tulsa for several hours leading up to the president's speaking did not see protesters block entry to the area where the rally was held.

Also the BBC is of the opinion this is an excuse.

Blame the coronavirus for discouraging people from attending. Blame phantom protesters - as the Trump campaign did in a statement - for blocking access to the rally site. Blame mischievous liberals for flooding the campaign with fake ticket requests, encouraging the campaign to prepare for massive overflow crowds.

31
Did the NYPD use an ambulance to trick protesters into cooperating?
15
Did Hillary Clinton's Campaign Fake a Rally in Greensboro, North Carolina?
30
Did Trump's inauguration draw the largest ever audience to a US inauguration?
67
Did Trump's inauguration cake copy the design of Obama's 2013 inauguration cake?
11
Did 80% of middle class families' tax burden decrease in 2018 because of Trump's tax cuts?
74
Did Trump order tear gas to be used on protesters to clear a pathway to a church for a photoshot?
63
Did Trump himself order the National Guard to clear out protesters (who sided with him) on the Capitol on Jan 6?
2
Did the judge in the Rittenhouse case have a Trump rally ringtone on his phone?