Did Neil Armstrong write such a letter to a skeptic?

Today, I saw a tweet with an image that claims to contain the answer of Neil Armstrong to a teacher that was skeptical of the moon landing (see below).

Of course it's not the image of a real letter, that's not the point. It's about the content.

What made me suspicious is the phrase "Or you could get on the net and find …". There's no date, the letter could be from a time when the Internet did exist but the whole "feeling" of the letter makes me think it was written a few years after Apollo 11, at the latest. So either the phrase is a saying I as a non-native speaker am not aware of, or it does refer to the Internet which would make this even more suspicious to me.

I tried finding the letter online elsewhere but only ended up finding the same tweet again.

So, did Neil Armstrong write such a letter to a teacher? 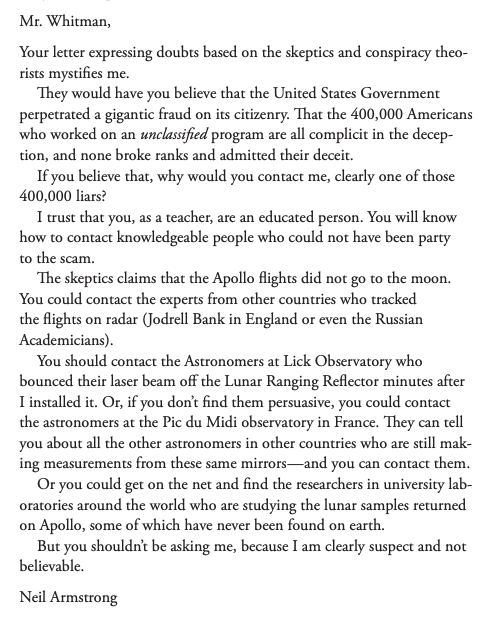 The Twitter thread gives an explicit source for this letter, 'A Reluctant Icon: Letters to Neil Armstrong'. by James R. Hansen. This book exists, from Purdue University Press, ISBN 9781557539694

Artfully curated by James R. Hansen, A Reluctant Icon: Letters to Neil Armstrong is a companion volume to Dear Neil Armstrong: Letters to the First Man from All Mankind, collecting hundreds more letters Armstrong received after first stepping on the moon until his death in 2012.

I also found an extract online here which includes the notice:

The majority of the letters featured in this volume are from the Neil A. Armstrong papers in the Barron Hilton Flight and Space Exploration Archives, Purdue University Archives and Special Collections.

This is expanded on in the preface, which discusses the editor's previous work writing an authorised biography of Armstrong, and how Armstrong's papers were subsequently donated to Purdue University (where Armstrong studied) and form the basis of these two volumes.

This is corroborated by a quick online search, e.g. a letter to the New York Times and Fox News.

The table of contents lists an entire chapter on "Quacks, conspiracy theorists, and UFOlogists" spanning pages 55 to 106.

@hdhondt's comment on the question made me aware that I totally missed the image is embedded in a thread and it's about the book "A Reluctant Icon: Letters to Neil Armstrong" . It seems the letter of the teacher is from 2000, so Neil does indeed mean the Internet. That makes the whole story quite plausible.

What made me suspicious is the phrase "Or you could get on the net and find …". There's no date, the letter could be from a time when the Internet did exist but the whole "feeling" of the letter makes me think it was written a few years after Apollo 11, at the latest

The Tweet has not provided you the letter to which Armstrong was responding. That letter is not only dated, but makes references to what the writer Armstrong's current age at the time (or what it likely was by the time he received the letter), and that the landing took place thirty years ago. It also encourages Armstrong to visit websites with material debunking the landing (that is, if he's not too old/ignorant to know about the Internet).

Not the answer you're looking for? Browse other questions tagged history nasa .

12
Did Conan Doyle write Sherlock Holmes?
15
Did mosque restorers find a 400-year-old letter from the architect with instructions?
22
Did a Jewish prisoner write this quote about God and forgiveness?
1
Did such a medical device ever exist that blew air into the anus?
25
Did Neil Armstrong find aliens on the moon?
14
Did Babbage write programs for the Analytical Engine prior to Lovelace?
4
Did John Stuart Mill write a history of Roman law at age 10?
98
Did al-Ghazali lead to decline of science in Islam as Neil Tyson claims?
61
Neil Armstrong: “One small step for man” or “one small step for a man”?