Were Boundary Streets in Queensland named as boundaries that Indigenous Australians were not allowed to cross? 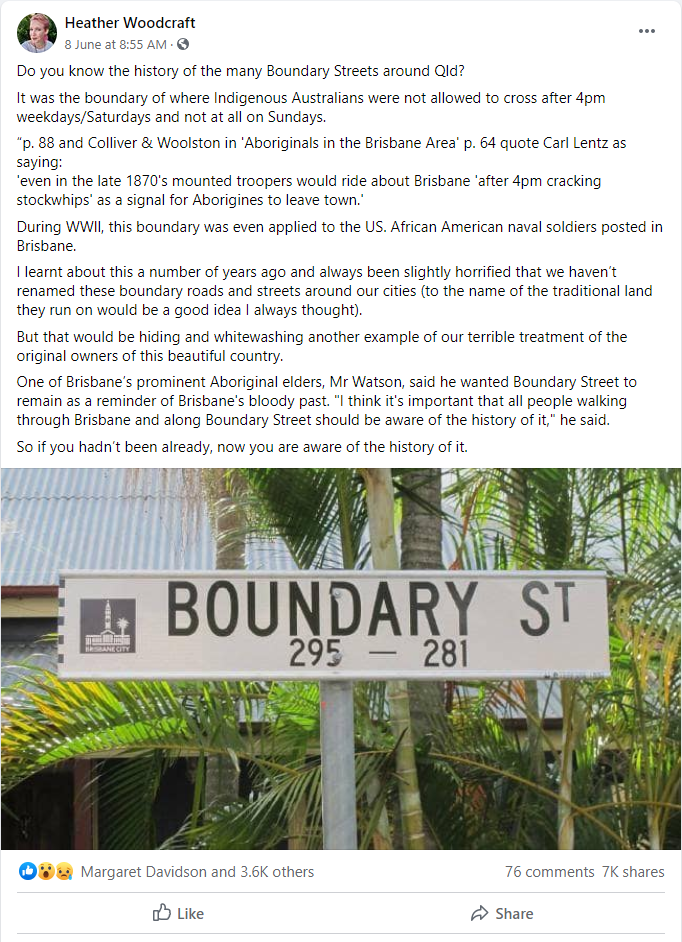 Do you know the history of the many Boundary Streets around Qld?

It was the boundary of where Indigenous Australians were not allowed to cross after 4pm weekdays/Saturdays and not at all on Sundays.

“p. 88 and Colliver & Woolston in 'Aboriginals in the Brisbane Area' p. 64 quote Carl Lentz as saying:
'even in the late 1870's mounted troopers would ride about Brisbane 'after 4pm cracking stockwhips' as a signal for Aborigines to leave town.'

During WWll, this boundary was even applied to the US. African American naval soldiers posted in Brisbane.

I learnt about this a number of years ago and always been slightly horrified that we haven’t renamed these boundary roads and streets around our cities (to the name of the traditional land they run on would be a good idea I always thought).

But that would be hiding and whitewashing another example of our terrible treatment of the original owners of this beautiful country.

One of Brisbane’s prominent Aboriginal elders, Mr Watson, said he wanted Boundary Street to remain as a reminder of Brisbane's bloody past. "I think it's important that all people walking through Brisbane and along Boundary Street should be aware of the history of it," he said.

So if you hadn’t been already, now you are aware of the history of it.

Is it true that these streets were used to curfew indigenous Australians? Were they named with the intention to discriminate against Aborigines? Did it also apply to black US military personnel in World War 2?

This answer focuses specifically on Queensland's capital Brisbane, since its history is best documented, but the general principles would have applied to other towns as well.

1) Is it true that these streets were used to curfew indigenous Australians?

Yes, it is -- but the naming predates the policy. More specifically, boundaries were defined to set the city limits of many places including Brisbane. Per this page, which contains a wealth of historical quotations on the topic, Brisbane's boundaries including Boundary St were first defined in 1846:

... the government decided to bring Brisbane within the provisions of the Police Towns Act of 1839. The town limits were drawn roughly into the shape of a square, straddling the river. (45) Today the limits fall with Boundary Street on the north and west, Vulture Street on the south, and Wellington Road on the east. This act was aimed at the removal and prevention of nuisances and obstacles, and 'for the better alignment of the streets'. Wickham had complained in April 1846 that dogs, apparently without owners, were 'constantly prowling about'; pigs and goats were also a nuisance rambling about 'in search of food, destroying gardens, crops'. So the Police Towns Act and the Dog Act came to apply to Brisbane.' (46)

Around 10 years later, a curfew on entering within the boundaries was imposed on Aboriginals:

From 1840 to 1855 Aborigines moved quite freely around the settlements, but after 1855 Blacks were prohibited from venturing inside Vulture and Boundary Streets after 4 p.m. or on Sundays.

And in 1897, the Aboriginal and Islanders Protection and Restriction of the Sale of Opium Act (transcript as PDF) not only banned them from entering towns and cities in Queensland (unless lawfully employed or otherwise exempted), but allowed the government to forcibly move them to designated reserves at will:

It shall be lawful for the Minister to cause every aboriginal within any District, not being an aboriginal excepted from the provisions of this section, to be removed to, and kept within the limits of, any reserve situated within such District, in such manner, and subject to such conditions, as may be prescribed.

The Act remained in force (with some modifications) until replaced by the Aborigines’ and Torres Strait Islanders’ Affairs Act 1965.

2) Did it also apply to black US military personnel in World War 2?

No, this does not appear to have been the case. Now I can't prove a negative, but we do know that the US army maintained racial segregation at the time and the designated recreational club for African-Americans was the Doctor Carver Service Club at 100 Grey Street, South Brisbane. This was centrally located and well within the town boundaries, as Boundary St is some 5 blocks to the west and Vulture St well to the south. Among many other facilities the club contained a "swinging" dance floor and a dormitory, which would not have been compatible with a curfew, much less a total ban.

Not the answer you're looking for? Browse other questions tagged history australia racism .