Is this metric system video, apparently taken from Fox news, a deep fake?

This video apparently shows Fox News saying the metric system is bad and giving arguments on why the current US customary system is better.

I do not come from the USA and have never watched Fox News, but I've often heard that they are capable of delivering dumb things in a serious manner, and are sometimes being taken seriously.

It seems to me that 20% of the comments on the video think it is fake or satire, and the community I initially got the youtube link was also unanimous that the video is in fact satire.

On top of this the hosts sometimes smile lightly, like one would when telling a joke but trying to keep a straight face.

Is this an actual news segment or is it a deep fake?

The original question asked whether the video is satirical. The answer to this is no. We can prove this on the strength that the arguments made by Tucker Carlson's guest have been published non-satirically in print.

James Panero, who proudly promotes this interview video on his personal website, claims in the interview that customary measures come from "ancient knowledge, ancient wisdom. From the Romans, 12. From the Babylonians, 60."

This argument was also made by John Michell in his 1988 book The Dimensions of Paradise.

As we have seen above, the English units relate numerically to the earth's dimensions through the powers of 12 [...] Greek and Roman units, being based on those numbers [5,040 and 7,920], had the maximum numbers of subdivisions.

Michell's book is sometimes taken as pseudoastronomy. Regardless, it shows that the argument that customary measures are "natural" is a real minority view in the Anglo-Saxon world.

This link, titled "Can the US continue to stand alone against the metric system?", is from foxnews.com, and has been there for several days that I know of. It is apparently the same video as the YouTube link, so one must assume that it is "authorized" by Fox News.

Of course, this doesn't prove that it's not intended as satire, but the odds of it being a "deep fake" are vanishingly small. 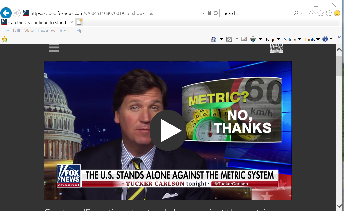 (I'll note that the above link doesn't work with Firefox or Edge -- you must use "Internet Explorer".)

12
Did some people claim in the 1970s that metric road signs would facilitate a ‘Russian invasion’?

7
Did the Obama administration ever attempt to ban Fox News from a Press Pool?