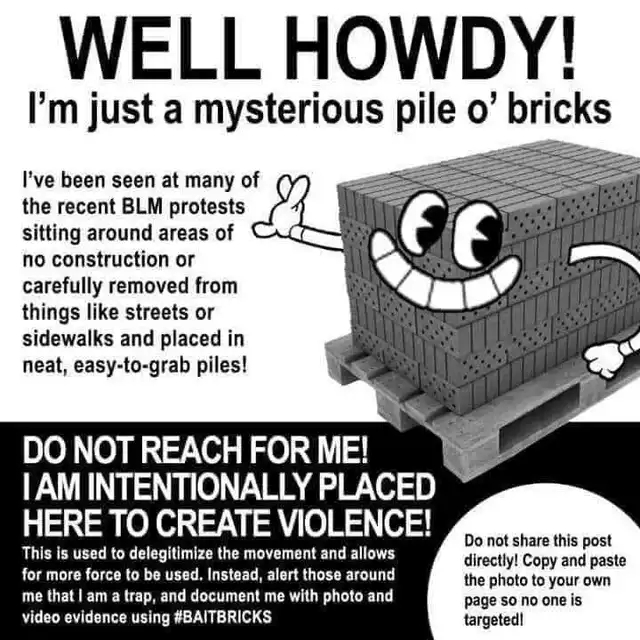 I've seen this image shared on social media, original source unknown. Is there clear evidence that piles of bricks have been placed in the path of protestors far away from any construction site in order to induce destructive rioting, and if so, how common are these?

I've been seen at many of the recent BLM protests sitting around areas of no construction or carefully removed from things like streets or sidewalks and placed in neat, easy-to-grab piles!

DO NOT REACH FOR ME! I AM INTENTIONALLY PLACED HERE TO CREATE VIOLENCE!

This is used to delegitimize the movement and allows for more force to be used. Instead, alert those around me that I am a trap, and document me with photo and video evidence using #BAITBRICKS

Do not share this post directly! Copy and paste the photo to your own page so no one is targeted!

A June 2, 2020 Buzzfeed News article looked at this claim.

They fact-checked 17 different claims of piles of bricks being left near protests, including photos of the bricks and the results of their investigation as to the source.

As of now, there's no evidence to support claims of coordinated brick placements at protests.

8
Is the Amityville Horror real?
8
Is the Ralph Williams angry car salesman clip real?
47
Are 10% of food stamps put towards soda?
38
Are these photos of protests posters against the Obama Administration real?
12
"Chance for a Spinster": Is this a real newspaper advertisement from 1865?
10
Are these photos of burned home surrounded by pristine trees in California due to the forest fires real?
8
Is this 1977 “thank you” letter from Joe Biden real?
6
Is this "Dear Liberal Communists" poster a real poster from Turning Point USA?