Did Mr. Tfue dig an elaborate underground swimming pool, with only basic tools, in 60 days?

It appears to show a single man digging and finishing this elaborate structure below ground, by hand, using only a few tools: 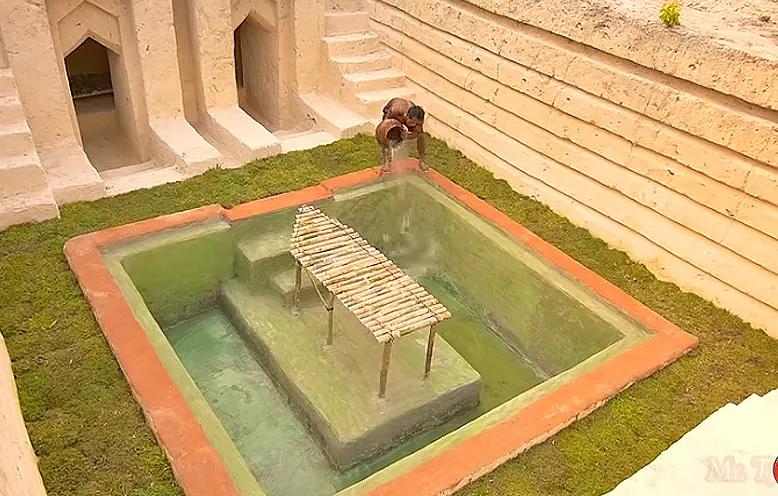 The only information provided about the project or the channel is on the Mr. Tfue channel About page:

Mr. Tfue: I'm from the United State Of America (USA). I'm planning to build Underground City in the wild completely from scratch using Primitive Tools. Currently, I found a small Jungle next to the village in South America to building Underground City.

While that copy comports with the apparently primitive tools used in the video, the camera work and editing is commercial grade. So I'm already suspicious. And I can't find anything online about this man, project, or outfit, that doesn't regurgitate what little information I've referenced here.

Are the claims of this video real?

For purposes of answering, the claim might be summarized as follows: This video depicts the work of a single man, using only the tools and materials shown, in an unprepared rural South American jungle site. The work spans a period no greater than 60 days. The structure suffers no visible erosion during 60 days and includes a "swimming pool" that is practically water-tight.

ETA: Though I am skeptical of the claim when taken in its entirety, it seems plausible for one person to implement the elaborate design and move that quantity of material in 60 days. As noted by another in the comments, I am most skeptical of the apparent characteristics of the ground: homogeneous and easily carved, but structurally strong and ... both waterproof to retain water for swimming, yet permeable so that rain (which it must receive frequently since it is apparently in a verdant jungle) does not leave it flooded, and neither does rain noticeably erode crisp edges.