Did George Biddell Airy write a paper "On Certain conditions under which a Perpetual Motion is possible"?

George Biddell Airy was an English mathematician. He was Astronomer Royal from 1835 to 1881

According to the Bessler Wheel web-site (a site dedicated to investigationg perpetual motion machines, Airy wrote the paper titled On certain Conditions under which a Perpetual Motion is possible, published in Cambridge Philosophical Transactions, December 14, 1829. They provide scans of the paper:

It is well known that perpetual motion is not possible with any Laws of force with which we are acquainted. The impossibility depends on the integrability per se of the expression Xdx + Ydy + Zdz: and as in all the forces of which we have an accurate knowledge this expression is a complete differential, it follows that perpetual motion is incompatible with those forces.

But it is here supposed that, the law of the force being given, the magnitude of the force acting at any instant depends on the position, at that instant, of the body on which it acts. If however the magnitude of the force should depend not on the position of the body at the instant of the force's. action, but on its position at some time preceding that action, the theorem that we have stated would no longer be true. It might happen that, every time that the body returned to the same position, its velocity would be less than at the preceding time: in this case the body's motion would ultimately be destroyed. On the contrary it might happen, that the body's velocity in any position

I am skeptical that this was originally written by Airy because of its impenetrable style and it is apparently nonsense.

Was this paper written by Airy?

The claim that George Biddell Airy wrote a paper titled “On certain Conditions under which Perpetual Motion is possible” which was published in the Transactions of the Cambridge Philosophical Society is true. The full text of the (short) paper can be read on Google Books.

Note that this isn't exactly what perpetual motion means in modern terms: perpetual motion is about creating energy. Airy's definition only takes some forms of energy into account (kinetic energy in the motion of the machine, and the “work” performed by the machine, but not necessarily, for example, electromagnetic forces).

Airy analyses a physical system and states that it obeys a certain mathematical equation. He analyses the possible solutions and concludes that, under a certain assumption (“on the supposition that g is small”)

I shall only remark that if c√e be less than π, the arc of vibration increases continually.

Airy does not claim that it is physically possible for c√e to be less than π and that this would be compatible with the assumption that g is small.

Furthermore, even if the arc of vibration increases continually, this might not be perpetual motion. It is possible that the analysis was missing some of the forces through which energy can be transferred. Airy does not clearly state whether he believes that the analysis of forces is complete.

Airy's official autobiography, edited by his son Wilfrid and published in 1896, contains an appendix listing every paper that Airy ever published, along with when and where he published them.

On certain Conditions under which a Perpetual Motion is possible is listed partway down page 374: 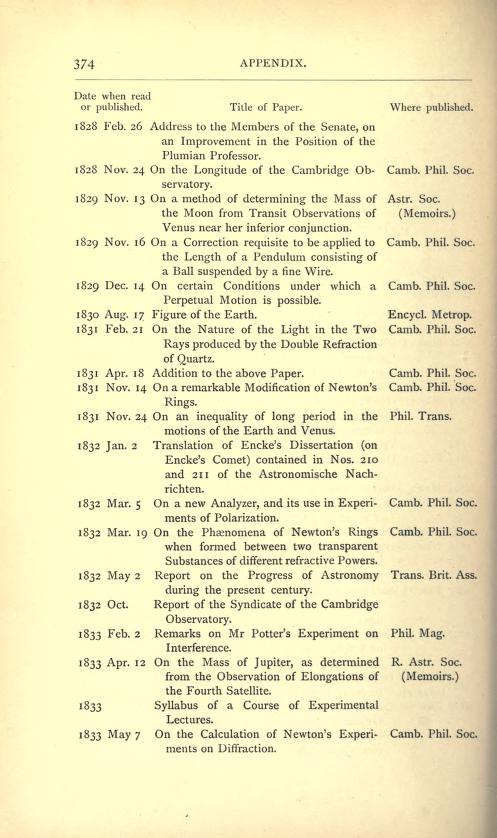 So yes, George Biddell Airy really did write that paper. This doesn't mean that he believed perpetual motion was actually possible - he said as much at the start of the section you quoted:

It is well known that perpetual motion is not possible with any Laws of force with which we are acquainted.

By "certain conditions", he's referring to hypothetical changes to the Laws of forces, not to any actual real-world force.

Not the answer you're looking for? Browse other questions tagged quotes physics .