Did the Soviet Union murder over 20M people under its control after the war?

During the whole post-WWII period, the Soviet Union murdered upward of 20 million people, its own citizens and others under its control

As it usually is the issue with those questions: what counts as someone being killed by the Soviet Union changes the answer. And that is supposing we have reliable numbers of the cause of deaths in the first place.

Soviet archives were only released in 1991, as such it was extremely difficult to assess the situation before then. It is also particularly difficult to tell how accurate the reporting was, e.g: how many people died from being overworked in the Gulag. Per Hoover's article, one such issue is illustrated by Anne Applebaum:

In her Pulitzer-Prize-winning work, Gulag: A History, Anne Applebaum wrote that “both archives and memoirs indicate that it was common practice in many camps to release prisoners who were on the point of dying, thereby lowering camp death statistics.” Expert historian of the gulag Oleg Khlevniuk stated that “early release for disabled and chronically ill prisoners offered an easy opportunity to tweak the figures. … Since they did not die in the camps, they did not affect gulag statistics.”

So what evidence do we have to estimate how many people were killed?

Stephen G. Wheatcroft released the following numbers after the fall of the USSR, based on soviet archives made public:

~Victims of Stalinism and the Soviet Secret Police - The Comparability and Reliability of the Archival Data, Not the Last Word - Wheatcroft (1999)

These cover only part of the USSR's lifetime as well (1921-1953), but again faces the risk of under reporting of deaths.

Other estimations used the demographic estimates to get an idea of how many people died based on expected population growth, such as one from Robert Conquest:

"I suggest about eleven million by the beginning of 1937, and about three million over the period 1937–38, making fourteen million. The eleven-odd million is readily deduced from the undisputed population deficit shown in the suppressed census of January 1937, of fifteen to sixteen million, by making reasonable assumptions about how this was divided between birth deficit and deaths."

This other analysis gathered data between 1927 and 1937 to estimate fatalities, adjusting based on expected population growth: 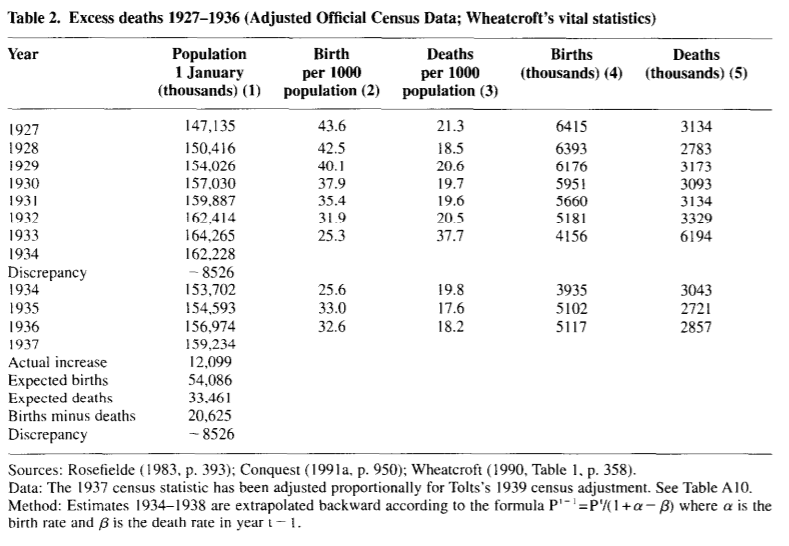 New demographic evidence and NKVD criminal homicide data (TsGAOR) confirm that at least 5.2 million people classifiable as excess deaths perished during the thirties. This validates the reliability of excess deaths as a homicide estimator contrary to Anderson’s and Silver’s assertions, and strongly indicates that 4.2 million other computable excess deaths were victims of Stalinism. Higher homicide tolls in the vicinity of 13.5-14.3 million calculated by Conquest are also demographically possible, given remaining uncertainties about unregistered births during the famine years and the censuses of 1937 and 1939.

Back to the question: did the USSR kill over 20M people after WW2?

The answer is that, strictly speaking, we don't know, however...

There was a census done in USSR in 1939, but the following one only came up in 1959. Many events make estimating the population changes extremely difficult, such as WW2 itself, the annexion of several countries by the USSR or the famine. The following ones were done approximately every 10 years from then (1970, 1979 and 1989) and each recorded a population growth.

I would note, however, that most fatalities documented above occured before or during WW2. If 20M deaths (or similar scale estimates) could be attributed to the USSR over the course of its existence, they likely didn't occur after WW2 but before, as the largest recorded demographical drop occured before 1939 based on current knowledge.

21
Did the Soviet Union ban microwave ovens in 1976?
7
Were the Soviet Union and Nazi Germany de facto allies in September 1939?
9
Did Niccolo Machiavelli advocate to fake your own death?
5
Was Mikhail Bakunin a murderer?
20
Did Stalin kill more than 10 million People?
1
Does Liberation Theology have its roots from the KGB and the Soviet Union?
6
Did the amount of bureaucrats increase in the immediate aftermath of the Soviet Union?
20
Was the KGB using leftists to "destabilize" nations?
30
Did people in ancient times, who survived childhood and were not killed in wars, have roughly the same chance to reach old age as contemporary people?