Did Feynman write 'Orange Juice' as a response to Pauling's advisory on Vitamin C?

Apparently, according to the Nobel Prize's official Facebook, Richard Feynman composed a song on the congas known as 'orange juice' after fellow Nobel-laureate Linus Pauling wrote to him claiming that his cancer could be cured with vitamin C.

Apparently, this was filmed the day before Feynman’s second operation for his cancer and this particular song was an amusing take on Nobel Laureate Linus Pauling's letter to Feynman advising him to get more vitamin C to possibly cure his cancer.

A YouTube comment on the video seems to support this claim. However, I could not find any other evidence supporting this. There is another video of Feynman playing the same song in a different context, but again, there is no evidence in the video that says he did this because of Pauling.

I couldn't find a reliable source that could explicitly verify or debunk the claim, but available evidence paints a picture of an OJ-loving Feynman.

1. The Quest for Tannu Tuva

Reading the YouTube comments it became clear that this was a segment from a documentary called The Quest for Tannu Tuva. The other clip OP mentioned had people asking the same question about the origin of this song:

There were several people asking this, and some swear that this documentary is really the place where you can find it. 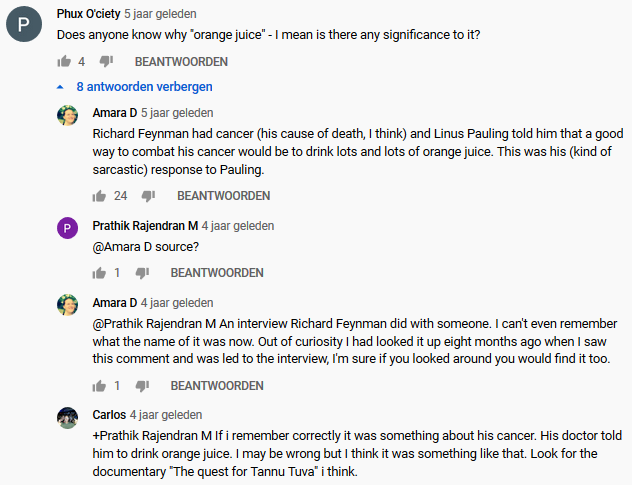 This seems to be a nice example of the Mandela effect. The full documentary can be found on YouTube. In the documentary he talks about a variety of topics: ballet, the bureaucratic tendencies of the USSR, throat singing, the Challenger disaster, hieroglyphs, etc. However, he didn't talk about his cancer or Linus Pauling for that matter. The clip with him playing the conga is at the very end of the documentary.

As an aside, there are plenty interviews online with Feynman and I couldn't find a single one where he discusses his illness, let alone mention Linus Pauling.

The double Nobel Prize winner, Linus Pauling, wrote to him advising him to take lots of Vitamin C. On this subject, Pauling became something of a crank, but Feynman answered him with admirable tact.

This tact seems to be confirmed by Steve Lawson, a colleague of Pauling (emphasize mine):

I was looking through some of the files for some reason and came upon a letter from Richard Feynman, Nobel Prize winner at Caltech, to Linus Pauling, apparently in response to a letter that Pauling had sent to him earlier. The earlier letter was referenced in the response from Feynman to Pauling. Feynman, at that time, had been diagnosed with a fatal disease, and I think Linus Pauling had written to him suggesting that high-dose vitamin C may have some value. Apparently in the earlier letter that Pauling sent to Feynman, he had enclosed some reprints of papers that he and Cameron had written on vitamin C, explaining host resistance and stimulation of the immune system and so forth. So Feynman had written back to Pauling thanking him for providing all this information to him and mentioned that he was going to share this with his physician.

In a separate paragraph, he mentioned that he had been thinking about Pauling's long, very productive career and all the major contributions that he had made to science and humanity. He closed by saying something quite clever and funny. He said: 'You know, Linus, I'm thinking about all of your achievements and all the wonderful things you've done for society, but I think your greatest achievement, your greatest contribution, has been your daughter Linda.' I thought that was quite funny.

An Oral History of the Linus Pauling Institute, September 19, 2011

Although he got a few details wrong, the gist of it seems to be accurate. You can find a transcript of both letters here.

Although it doesn't prove anything explicitly, it does however begs the question why Feynman would be courteous towards Pauling while simultaneously mocking him in public.

As weird as it may seem, there are several sources that shows he truly liked orange juice, well before he got seriously ill (emphasize mine):

After considerable time - several orange juices and many very very good hors d'oeuvres later - a military uniform with medals comes over to me and says, "Talk to the queen!".

Perfectly Reasonable Deviations from the Beaten Track - The Letters of Richard P. Feynman

Tuesdays, I went to the Feynman residence for a couple of hours, receiving $5,50 per hour (a lot in those days!) and all the physics I could swallow. Gweneth used to bring us orange juice and cookies mid-session.

The Quantum Labyrinth: How Richard Feynman and John Wheeler Revolutionized Time and Reality

Romantic attachments were so obviously lacking in his life, however, that the fun-loving Dick Feynman took him to task about his monastic existence as they sat on Fuch's G.I. bed in the austere Bachelor Dormitory No. 102, drinking orange juice.

Based on all the different sources I could find, I get the feeling this all started with somebody who heard the Orange Juice song, knew about Pauling's letter and hypothesized a possible connection which later became an internet myth. That is just my humble opinion. Perhaps there is an interview like the YouTube comment suggests (or other evidence to the contrary) that I couldn't find, but I'd like to think in the meantime that Richard Feynman just really liked his OJ.

Not the answer you're looking for? Browse other questions tagged music history-of-science .

3
Did The Beatles write "Norwegian Wood" after hearing Bob Dylan's "4th Time Around" as claimed by producer Al Kooper?
31
Did Alexander Graham Bell write "the unchecked burning of fossil fuels would have a sort of greenhouse effect" in 1917?