CNN reports that a Frenchman named Amirouche Hammar had Covid-19 in December in Paris. This was supposedly discovered after old samples were re-checked for the Covid-19 virus.

Alas there's hardly any detail in that news report besides the fact that Hammar went to a hospital with a dry cough and (eventually?) coughing blood. There's nothing said about his travel history for example.

Insofar, I think the first (previously) confirmed case outside China was one in Thailand on Jan 13, according to the WHO:

13 January 2020: Officials confirm a case of COVID-19 in Thailand, the first recorded case outside of China.

So is there anything that can corroborate the scant account from the CNN report? Did Hammar have a travel history? Is the virus sampled from him close enough to the original Wuhan samples (vast phylogenetic trees of Covid-19 have assembled by now).

Alternatively Hammar's sample(s) could have been contaminated later... (E.g., even the CDC had a notorious problem with something like that.)

This has been all over the breaking news, although none of the news stories I found link to the actual study, so here's Reuters' take:

The Italian National Institute of Health looked at 40 sewage samples collected from wastewater treatment plants in northern Italy between October 2019 and February 2020. An analysis released late on Thursday said samples taken in Milan and Turin on Dec. 18 showed the presence of the SARS-Cov-2 virus.

“That COVID-19 could have been circulating in Italy is possible,” said Rowland Kao, a veterinary epidemiology and data science professor at Scotland’s Edinburgh University.

“(This finding) does not on its own, however, tell us if that early detection was the source of the very large epidemic in Italy, or if that was due to a later introduction into the country.”

Samples positive for traces of the virus that causes COVID-19 were also found in sewage from Bologna, Milan and Turin in January and February 2020. Samples taken in October and November 2019 tested negative.

So it is corroborating evidence that the virus may have been circulating in Europe somewhat earlier (December 18 in Italy) than the confirmed (individual) cases.

It seems that study has been published in a peer reviewed venue. They mention Milan and Turin in the abstract and find Dec 18 as the first positive sample, so it's almost certainly the same study that was discussed in the press. 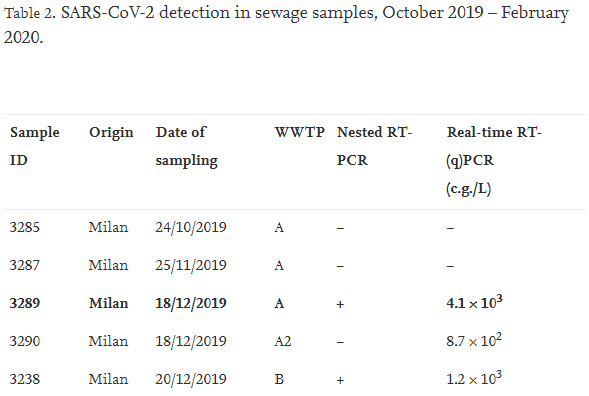 Furthermore the CDC has published a paper from Italian authors finding a similar case to the French one, but in Italy, i.e. a Dec 2019 retrospective detection:

We identified severe acute respiratory syndrome coronavirus 2 RNA in an oropharyngeal swab specimen collected from a child with suspected measles in early December 2019, ≈3 months before the first identified coronavirus disease case in Italy.

The sequence (SARS-CoV-2_Milan_Dec2019 [GenBank accession no. MW303957]) was identified in a specimen collected from a 4-year-old boy who lived in the surrounding area of Milan and had no reported travel history. On November 21, the child had cough and rhinitis; about a week later (November 30), he was taken to the emergency department with respiratory symptoms and vomiting. On December 1, he had onset of a measles-like rash; on December 5 (14 days after symptom onset), the oropharyngeal swab specimen was obtained for clinical diagnosis of suspected measles. This patient’s clinical course, which included late skin manifestations, resembles what has been reported by other authors; maculopapular lesions have been among the most prevalent cutaneous manifestations observed during the COVID-19 pandemic, and several studies have noticed a later onset in younger patients (7).

One sample taken from a 42-year-old unemployed male born in Algeria who had lived in France for many years was positive. His last foreign travel was to Algeria in August 2019. One of his children presented with ILI [influenza-like illness] prior to the onset of his symptoms. His medical history included asthma and type II diabetes mellitus. He presented to the emergency ward on 27 December 2019 with haemoptysis, cough, chest pain, headache and fever, evolving for 4 days.

... The patient was admitted to the ICU where he received antibiotic therapy and his clinical evolution was favourable until discharge on 29 December 2019.

... Here we report an observation of a SARS-CoV-2-infected patient 1 month before the first reported cases in France. ... the absence of a link with China and the lack of recent foreign travel suggest that the disease was already spreading among the French population at the end of December 2019.

Yes, but it goes even further back than that:

MADRID (Reuters) - Spanish virologists have found traces of the novel coronavirus in a sample of Barcelona waste water collected in March 2019, nine months before the COVID-19 disease was identified in China, the University of Barcelona said on Friday.

Not the answer you're looking for? Browse other questions tagged covid-19 europe france .

17
Will Europe soon have more Muslims than Christians?
13
Was a "large number" of new COVID-19 clusters in the United States seeded by travellers from Europe?
10
Did Germany and France offer help to Italy in the Covid-19 crisis?
7
Has China eliminated local transmission of COVID-19 within its borders?
5
Was COVID-19 in Italy by September 2019?
6
Did SARS-CoV-2 appear in some (Mojiang) Chinese miners in 2012?
7
Did Spain have 433.13K deaths in 2020 and 428.44K in 2019?
38
Did the French government print posters explaining COVID-19 vaccination passport policy already in January 2020?
6
Did 'border closure' have little to no effect on COVID-19 mortality?