Did Margaret Mead say that a healed femur is the earliest sign of civilization?

A 1997 issue of the Bulletin of the American College of Surgeons, in an article I could not identify, contains the following story:

The noted, late anthropologist, Margaret Mead, was once asked, "What was the first sign of human civilization?" The inquiry came from someone who expected her to identify some artifact crafted by a primitive human being. Her reply was, "A healed human femur." She went on to explain that it was the protection, feeding, and care by another individual that was unquestionably required to allow such a person to survive to the point of healing of such a fracture that signified that civilization could proceed.

This story is now being widely spread on social media as a heartwarming tale relating to the COVID-19 pandemic. Sometimes Mead is claimed to have given a talk to an institution. Here is one example of such a meme. I found no indication that later renditions of this story provide more specific details about when or where this conversation happened. 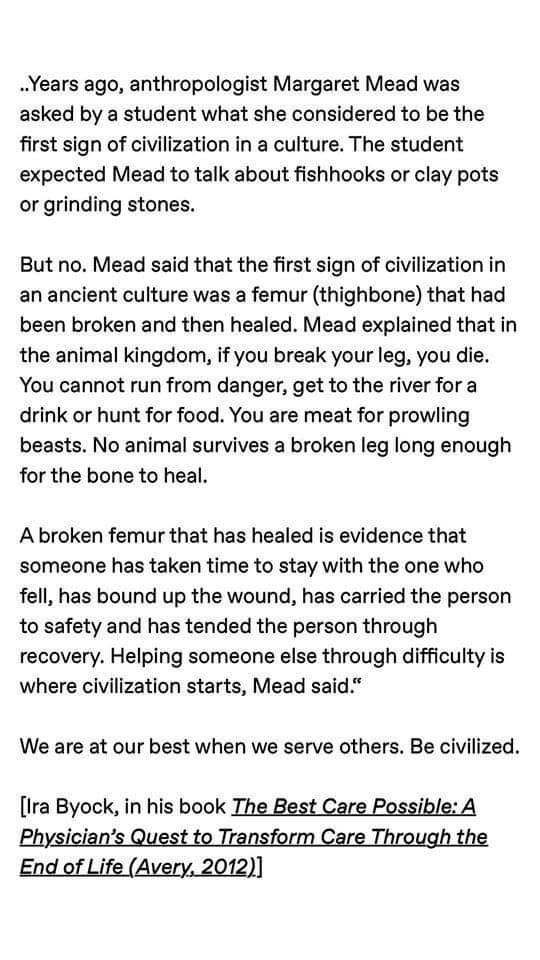 Did Mead, or any anthropologist, say this?

quotes sociology anthropology
Share
Improve this question
asked May 3, 2020 at 15:49

(Posting this as a self-answer because it's too large for a comment, but not accepting it because it's conjecture)

Daniel R Hicks commented that he heard this "around 1980." Indeed, it appears that the earliest print citation is from precisely the year 1980, in the surgeon Paul Brand's Christian memoir Fearfully and Wonderfully Made (Grand Rapids, Mi.: Zondervan). This screenshot is from page 68. I mainly wanted to post this here to award Daniel Hicks a point for being spot-on. 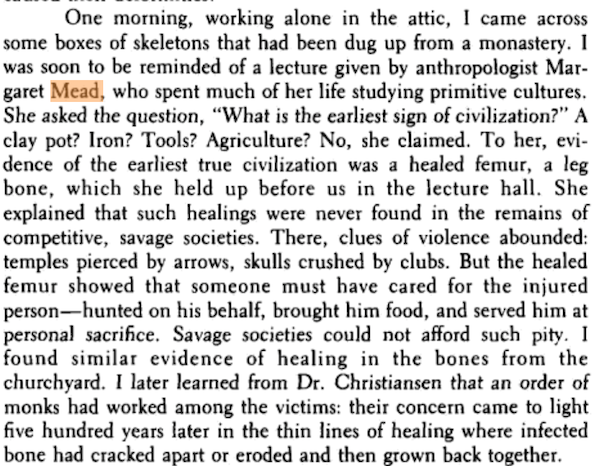 This anecdote was reprinted in Brand's book Pain: The Gift Nobody Wants (1993) and probably spread widely from there. The major issue with this story is that Margaret Mead was a cultural anthropologist, not a physical anthropologist, and no one else has attested to this story.

Fearfully and Wonderfully Made was co-authored by Brand and a Christian popular writer named Philip Yancey. Having skimmed several of his books it appears to me that Yancey's favorite mode of writing is the anecdote. Brand, who was a revered doctor in his time responsible for a paradigm shift in the treatment of leprosy, wrote his own monograph on pain in 1972 but it was only 16 pages long. In various books, Yancey writes that he found a copy of that monograph in a warehouse and decided to reach out to Brand for collaboration. We have a delightful description from Brand's biographer of how that collaboration worked.

Now, with Philip the writer, Paul was the learner. He learned that some of his paragraphs were too long. He had to find more anecdotes to lighten the flow of his argument. When he had none, Philip was not put off. “Come on, Dr. Brand! You can’t tell me that after thirty years as a surgeon you have no experiences to illustrate the point you are making! Or perhaps if you have no experiences, you should not make the point at all. It is only valid if it has been proved in real life.” So Paul had to go back and think and remember. He also drew [his wife] Margaret into the project because her memory was often better than his.

It appears that in order to produce longer and more appealing books Yancey plied Brand for anecdotes, which were slow and difficult in coming. I have to wonder if this quotation is some sort of accident produced from their collaboration. However, I can draw no firm conclusion from this argument from silence. It remains entirely possible that Mead or some other anthropologist said this at some point.

Not the answer you're looking for? Browse other questions tagged quotes sociology anthropology .

19
Can any fish climb trees?

50
Did Freeman Dyson say that atoms have awareness?
25
Did Margaret Sanger say "Colored people are like human weeds and are to be exterminated"?
6
Did Putin say that "to forgive the terrorists is up to God"?
14
Does swearing give people the impression that you are from a lower social class?
2
Did Ariel Sharon say that the Jewish people control America?
97
Did Karl Marx write that slavery had good sides and abolishing it would indirectly destroy modern civilization?
11
Did doctors/scientists say that breaking the 4-minute mile was impossible?
51
Did Margaret Sanger say "The most merciful thing that a large family does to one of its infant members is to kill it"?
8
Did Alain Finkielkraut say that "the left no longer has ideas, only enemies"?