Do 4K displays use more power, because it is hard for the backlight to shine through those super tiny pixels?

I was watching Linus reviewing the 2020 MacBook Air and he said about the competing laptops that 4K was pointless on a 13" laptop and that it just hurts the battery life, because it's harder for the backlight to shine through those super tiny pixels. It's the first time I've ever heard anyone say that and I felt quite sceptical.

There's no question that a 4K display will require more power than a 1080p display, but are the tiny pixels really a problem for the backlight? Do you need stronger backlight to accomplish the same brightness and if so, how much stronger? I would assume that the difference is negligible and that the extra power consumption mainly comes from operating 4 times more pixels and the graphics chip having to work 4 times harder. The size of the pixels doesn't seem like a big factor here.

Active Oldest Votes
2
Want to improve this post? Add citations from reputable sources by editing the post. Posts with unsourced content may be edited or deleted.

Yes, this is correct, at least some of the time. Here is an image of an LCD display taken with a microscope: 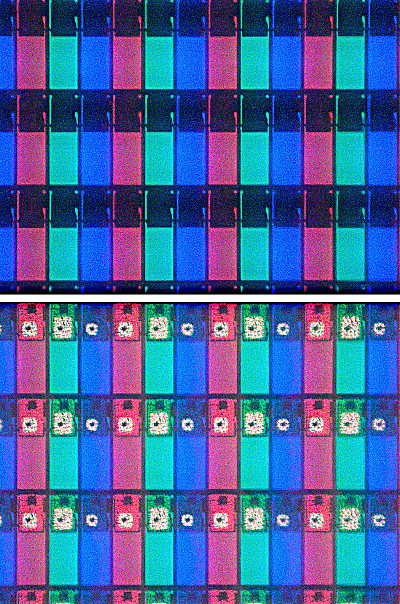 The black/white parts at the top of each pixel are the hardware for controlling each of those pixels. On mobile displays the manufacturer should use the smallest control hardware possible to maximise the amount of light that passes through the pixel, regardless of the resolution of the screen.

So for a 4k display, where 4x as much control hardware is needed as on a 1080p display, will have more of the display blocked by the electronics and thus need to produce more light to produce an equally bright image.

In practice there are other factors at play. 4k displays command a price premium so the electronics may be more expensive too, and thus smaller. But probably not 25% of the size. There are also small gaps between pixels and with 4x as many pixels the gaps account for more of the space, and light can't shine through them.

On an LCD screen the light travels through the pixel. The controller on each sub-pixel (see groups of three rgb rectangles in dont_shog_me_bro's answer) determines how that light is twisted and bent to display N amount of each, rgb, to give the full pixel it's color.

While missing useful diagrams of above, similar details can be found here: https://techterms.com/definition/lcd

There are other factors in play, but between 4x controllers(assuming the same size), and inevitably more area in gaps (even if the gaps are half the size) you are looking at a non-negligible increase in needed back light power to achieve the same brightness.

We also have to assume that O isn't some overwhelming factor, and I am, but cannot prove it due to ignorance of what other factors actually exist. (really just assuming there are more in the first place...)

I see the comment on the previous answer for quantification. I'd argue this is an impractical endeavor. It's going to be entirely screen dependent, and even more variation between manufacturers. You could probably pull specs for two screens by the same manufacturer that have enough similarities to get useful data in comparing those two screens. As far as in general for every 4k vs 1080p goes, that'd be quite a research project, and probably needs a lot of funding. I'd even wager there exist 1080p screens with the same brightness as a 4k where the 4k screen uses less power. i.e. a 2020 dell xps 15 in 4k vs a 2010 hp 'insert model' 1080p - strictly due to advancements in the pixels, reduction in gaps, reduction in controller size, etc.

While not an authoritative source, this Quora answer reviews this in section 3 of the top answer:
https://www.quora.com/Does-a-4k-screen-displaying-1080p-use-the-same-amount-of-energy-and-system-resources-as-a-1080p-screen

A 4K display has smaller pixels than a 1080p display at the same size. Each pixel at 4K has only 1/4th the area of a pixel at 1080p. Let’s assume we’re talking about LCD technology. The transistor technology driving each pixel generally does not shrink as readily as the liquid crystals do. That means that the ratio of the area of the liquid crystal part to the transistors is less at 4K than it is at 1080p. This immediately translates to less luminance for the same backlight power, or, more appropriately, a stronger backlight required for the same display brightness.

Also to note, this all changes with OLED - each pixel is it's own back light. Throws this whole discussion out the window, if that's what we want to compare.

Not the answer you're looking for? Browse other questions tagged physics technology electronics .

11
Did the German navy use UV lights for communication from submarines?
21
Does turning the lamp in my classroom off and on use more energy than it being turned on for 30 minutes?