Is the US government seizing PPE supplies to resell them with a markup?

This copypasta has been flying around on reddit for a while, and I'm wondering how much there is to it.

It's more than that. The Federal Government under Trump thinks they have no duty to help states at all, that they should in fact actively compete against them to funnel money to an even more elite group than the 1%.

The following is not my work. Here's the scam as it exists:

Hospitals say feds are seizing masks and other coronavirus supplies without a word. (1) This is in addition to the Fed stealing supplies from shipments from states, and acts of piracy abroad. (2)

Here's how what they're doing works:

1.) Eliminate oversight of the spending of nearly a trillion dollars of tax dollars. (3)

2.) Acquire the authority to command which businesses get which contracts. (4)

3.) Have trusted people stand up companies through which the money can be funneled (3 week old company, founded through a loan approved via the Coronavirus Stimulus bill, is now the center of medical supply distribution): (5) “I don’t want to overstate, but we probably represent the largest global supply chain for Covid-19 supplies right now,” he said. “We are getting ready to fill 100 million-unit mask orders.” (16)

4.) Have the federal government sell, at a reduced price, its strategic stockpile to the new companies, run by your buddies. (6) (15)

6.) Have the federal government spend taxpayer dollars to ship supplies purchased from China to these brand new private companies. (8)

7.) Eliminate the competition. Attack any company that doesn’t play ball. (9) ----- States are having to smuggle in supplies aboard sports teams jets, and escort them with state police (10). Is it really to this point that we're going to have to have states deploy the national guard to protect their shipments and supplies and treat the federal government like the enemy? This is no different from the Somalian government stealing food sent by the United Nations and cartels selling it illegally. (11) Except in this situation FEMA is the cartels and the banana republic is the United States.

Also regarding Trump removing the watchdog overseeing the $2 trillion coronavirus bill? In 1998 the Supreme Court ruled line item vetos are unconstitutional. (12) His excuse? The Take Care Clause. And the Take Care Clause just says the President can't make his underlings do stuff that's against the law. It underscores that the executive is under a duty to faithfully execute the laws of Congress and not disregard them. (13) If you don't know what that's about, Trump wrote a line item veto into the stimulus bill that he was going to ignore the oversight provisions in the bill and do it himself. (14)

This Reddit comment can assist. The US Federal Gov't give PPE and tests "to their 5 preferred distributors. Those distributors resell it to the highest bidder." Sources:

Twitter has a clip of the head of FEMA saying as much. 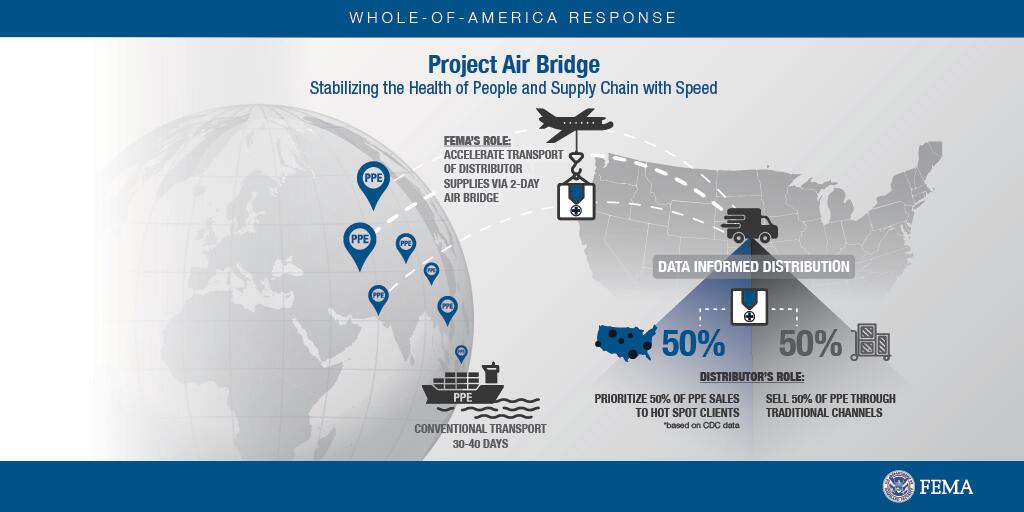 This memo by the [J]ustice [D]epartment (DoJ) says the distributors are immune from price fixing lawsuits:

Conduct by federal agencies is not subject to scrutiny under the antitrust laws. Courts have extended this immunity to conduct by private parties acting individually or together when (i) the collaboration is compelled by an agreement with a federal agency or a clearly defined federal government policy and (ii) a federal agency supervises the conduct. The Department will not challenge conduct that satisfies this standard in responding to the COVID-19 pandemic and its aftermath.

It also lists the distributors:

This other DOJ memo says that they are in fact seizing medical supplies:

We will also work closely with the Administrator of FEMA in exercising his authority under the Stafford Act to seize necessary healthcare and medical items, where appropriate, and to redeploy them to the people who need them most.

16
Has the US federal government ever defaulted on a loan?
14
Did US President Bill Clinton pay down the national debt by $223 billion in 2000?
17
Did Texas ban tampons and diabetes supplies from the Senate Chamber while allowing guns?
0
Is the US debt between 15 and 20 trillion dollars?
9
Has the US Government tagged people to be killed with stickers on the mailboxes?
16
Did the U.S. sign a treaty with another government about the legality of a single coin?
7
Did Trump use the Defense Production Act in recent weeks?
24
Must churchgoers be registered with the government in Kansas City?
60
Did Abner Schoenwetter spend 6.5 years in jail because he used plastic bags instead of cardboard boxes when importing lobsters from Honduras?