As the question suggests, can you prove a plane hit Pentagon on September 11 without a question? I would like to have CLEAR evidences based on real videos from different angles. Edit: There is a question as "Did a plane hit the Pentagon on September 11, 2001?" but my question is different. It shows some photographs and answers are in terms of pictures. I am asking in terms of videos.

I hesitate to answer, and thereby somehow "validate" such a poor quality question, but here goes:

This video, from a security camera at a nearby parking lot, captures the time period of the incident. (I don't say it shows the "instant" of the crash, because it's a once-per-second "video" and hence shows about a half-second before the crash and then, in the next frame, a half-second after the crash.) This particular version is from a Wikipedia article about the incident, but there are other sources, and articles from several reputable news sources mention the existence of the video.

This is second 23 in the video: 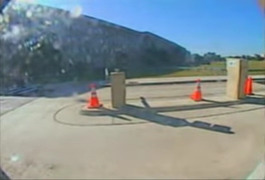 This is second 24 in the video: 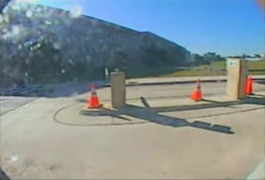 This is second 25 of the video: 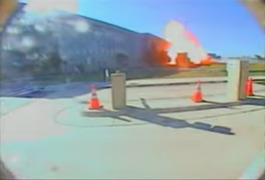 If you look closely at the "second 24" image, between the top corner of the box on the right side of the image and the right margin of the image, you can see the front half of an airliner-sized object. And, in the "second 25" image, you can see what may be the rear portion of the aircraft just to the left of that box on the right side (though it's too fuzzy to say whether it's the aircraft or exhaust fumes or some such). But clearly, in that last image, the crash has occurred, and flames are erupting from the building.

To back up the credibility of the video ...

Here is a CBS article from 2006 mentioning the video: Pentagon Makes Public 9/11 Footage

Here is an AP article from 2019 mentioning the video: Video does not show missile hitting the Pentagon on 9/11

Here is an NBC News/AP article from 2006 mentioning the video: Video of 9/11 plane at Pentagon is released

If you are prone to complain "Why didn't they have a video camera that was taking more frequent images?", remember that this is a PARKING LOT security camera, and there would be no need to have anything more rapid, plus this was in 2001, about 6 years before the first iPhone, and data rates and densities were well below today's standards.