To give you an idea of the times we are living in, Twitter has been flooded with hundreds of new accounts today.

All have the NHS tag and a picture of a Nurse or doctor. All are praising of the government and tweeting how they have lots of PPE and stories otherwise are fake news.

One problem. They are all commercial bot accounts. Take any of the profile pictures and image search and you’ll find some poor Healthcare worker who’s picture has been stolen. Like Mia the nurse who is now ‘NHS Susan, ‘ the Boris loving bot account. 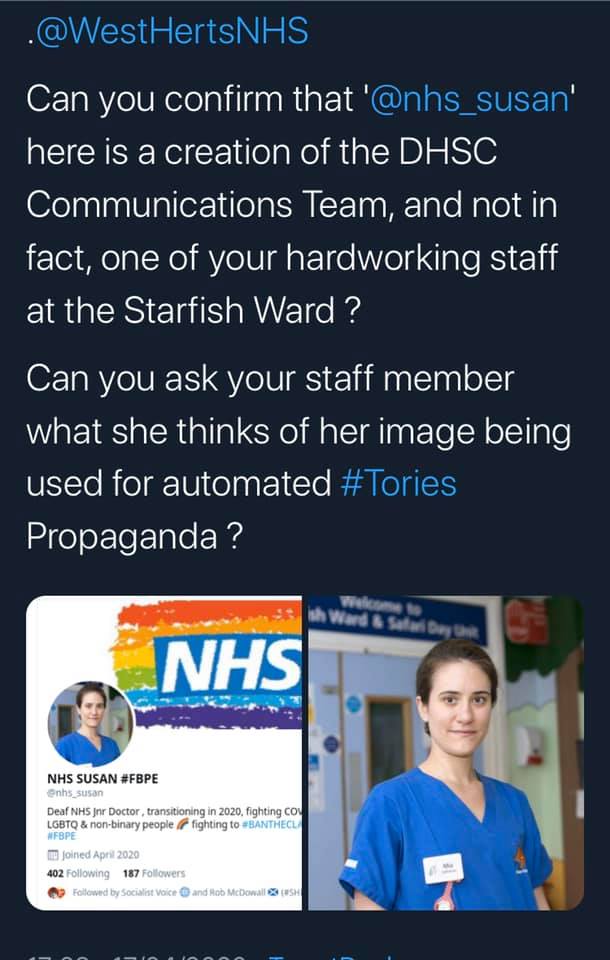 (The DHSC mentioned in the image would be the Department of Health and Social Care.)

The "WestHertsNHS" respond here: https://twitter.com/WestHertsNHS/status/1252323058100178945 and seems to confirm a fake account has been taken down. The rest of the thread seems inconclusive.

The DHSC has said on Twitter that “these claims are categorically false”. Twitter said in a statement that its “specialist teams currently do not see evidence of large-scale coordinated platform manipulation surrounding the Covid-19 conversation, including suggested coordination associated with the UK Government.”

Currently, there is no publicly available evidence to support these claims. Full Fact has asked Mr O’Connell to share his evidence, but he has told us that he is not ready to do so at this time.

Specifically w.r.t “@nhs_susan” account, Full Fact report confirms that this was indeed a fake account tweeting pro-government messages. Who operated this account remains unknown: it could have been used for pro-DHSC propaganda, but it also could have been used to frame the DHSC, accusing them for a propaganda attempt they didn't do:

Mr O’Connell claims to have identified 128 accounts that form part of this network. However, at the time of writing, we are only aware of one account, “@nhs_susan”, that has been publicly identified. That account has since been deleted, but some of its tweets can still be seen in a Google cache.

The account was undeniably fake—it uses an image of a real nurse from the website of Unison, a trade union that represents a large number of healthcare workers.

It is true that, based on what’s visible in the Google cache, this account tweeted broadly pro-government sentiments. However, it doesn’t contain evidence supporting Mr O’Connell’s broader claims that these accounts initially pushed a “herd immunity” policy, and then advocated for ending the lockdown.

There are also elements of the account that suggest it may have been intended, at least in part, as a parody of left-wing activists. The account’s pinned tweet was a call to ban displays of public support for NHS workers, saying: “As a deaf junior doctor, I must say it’s not inclusive for people like me, and children who go to bed early and also dogs who have sensory overload. #bantheclap”

Fun fact: O’Connell have already spread a claim about selling NHS assets that turned out to be false. This indeed doesn't prove anything about the current claim, but in absence of hard evidence it does increase the probability that the current claim is false too.

Not the answer you're looking for? Browse other questions tagged politics united-kingdom healthcare government social-media .