Are Australia's 5G radiation safety standards at least one hundred times laxer than of 6 other listed countries?

I saw this poster on the Facebook wall of a friend. The earliest I traced it was to Electrosensitivity Australia's Facebook wall where it was shared over 1700 times. 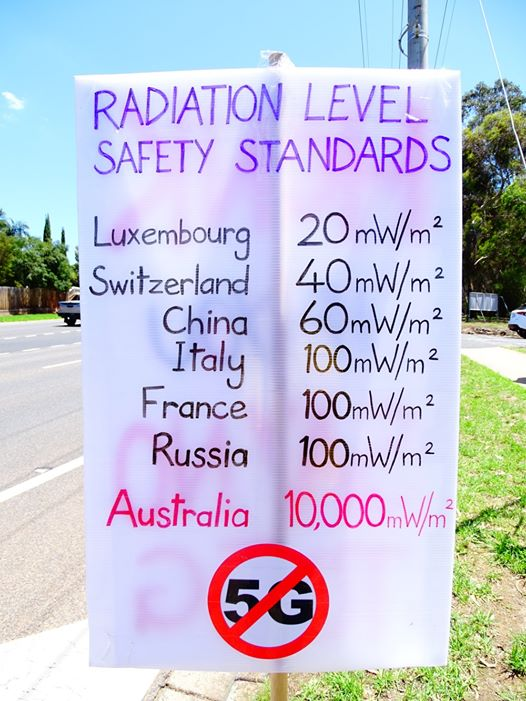 I want to know whether it is essentially true - that Australian standards for radiation exposure are 100 times laxer than the six countries listed (which I cynically assume have been cherry-picked, but that's another question).

No doubt there are many standards for different types of radiation - I think it is fair to the claimant to say they were referring to the sort of radiation used by 5G phones and towers.

This looks, at best, to be a careless mistake if not an intentional lie. The key problem is that mW/m2 is no longer considered a meaningful standard.

Here are the Australian government's current standards on exposure to non-ionizing radiation, adopted in 2002. Here is Table 4 from page 8: 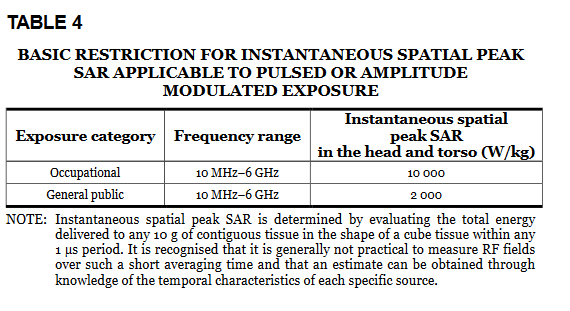 This may be where the 10,000 came from. But notice that the unit is not mW/m2, it's W/kg. The specific absorption rate or SAR is based on mass not surface area. That figure is also for occupational contexts, not the general public.

What would this standard look like expressed as mW/m2? I have no idea, but the following from (pp. 33-34) leads me to believe it is effectively something less than 10 mW/cm2.

In 1953 the US Navy adopted a maximum continuous exposure limit of 10 mW/cm2 for all RF and microwave frequencies in use. In 1966, the American National Standards Institute published the first edition of the C95.1 Standard (ANSI 1966) specifying a 10 mW/cm2 human exposure limit for the frequency range from 10 MHz to 100 GHz. Early exposure standards were inadequate because they failed to account for important physical aspects of electromagnetic wave interaction with the body. [...] By the late 1960s it was clear that experimentally induced microwave and RF bio-effects could be observed in small animals exposed either to continuous wave(CW) or pulsed RF and at levels significantly below the ANSI time averaged limit of 10 mW/cm2.

The 10 mW/cm2 level from ANSI was adopted as a de-facto limit in Australia from about 1955 to 1979, through various guidelines and rules imposed by authorities (Byczynski 1960; Standards Association of Australia 1972; TelecomAustralia 1975; Lange 1976). In 1978, Tell implied that the 10 mW/cm2 ANSI limit was unsuitable at certain frequencies because it could lead to excessive
temperature rise in tissue (Tell 1978). Additionally, it became evident that specific absorption rate (SAR) data could be used to establish exposure limits. Proposed limits of exposure derived from a thermal model using SAR absorption data were initially published in a 1979 report issued by the Australian Radiation Laboratory (Cornelius & Viglione 1979) and later that year Standards Australia formed a committee to develop an Australian Standard. In 1981, Telecom Australia revised their exposure guidelines in accord with the newly derived limits (Hocking 1981). In the USA, the 10 mW/cm2 limit was in force until 1982 when (ANSI 1982) revised their approach and incorporated a modern understanding of relevant exposure parameters.

How do Australia's standards compare to other countries? This gets complicated because the standards can't be boiled down to a single number. The above is not the best point of comparison because it is for "Instantaneous spatial peak SAR". Most standards seem to emphasize average exposures rather then instantaneous, and they talk about different parts of the body and other details. I don't feel qualified to do a systematic comparison but the numbers I see out there for the US, the EU, etc. all look roughly comparable when taking these details in to account.

The Australian government links to a 2018 Dutch study for a standards comparison. Although this study doesn't cover the 5G band, the EU-Australia similarities in the 3G-4G band (right columns) suggest the claim of large differences in the 5G band is probably unreasonable in general (but see end of answer for exceptions). Australia is the 1st below the row break in the table below (above the break are EU countries.) 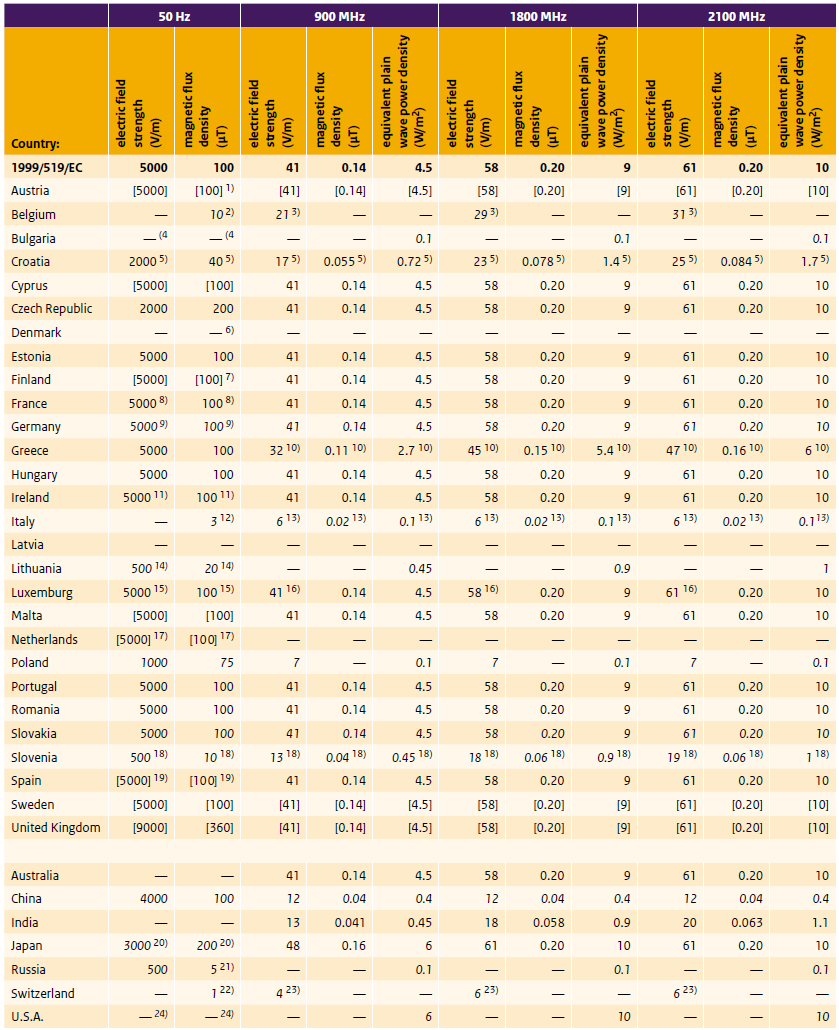 (There's a page-full of footnotes for that table, which I'm omitting here.)

The "equivalent plain wave power density" e.g. in the 2100Mhz band (3G-4G) is is roughly the same at 10 W/m^2 is most of the countries in that table, although some e.g. Bulgaria or Italy do have a much lower limit (0.1 W/m^2). But these [mostly] aren't the countries highlighted in the questionable poster, except for Italy, and the footnote for Italy says:

EMF from fixed systems for telecommunication and radio or TV broadcasting near homes and their outdoor annexes, in schools and playgrounds, in places with stay greater than 4 hours; elsewhere 20 V/m, 0.06 μT, 1 W/m^2.

There are loads of documents on 5G on the EU sites (Parliament, Commission etc.), mostly dealing with rollout schedules, but I can't find a 5G radiation limits comparison table between EU countries, so I think those standards haven't been finalized at national levels to allow such a comparison.

The 1999/519/EC directive sets limits up to 300Ghz, so those apply to the 5G spectrum unless EU countries decide to set stricter national standards. 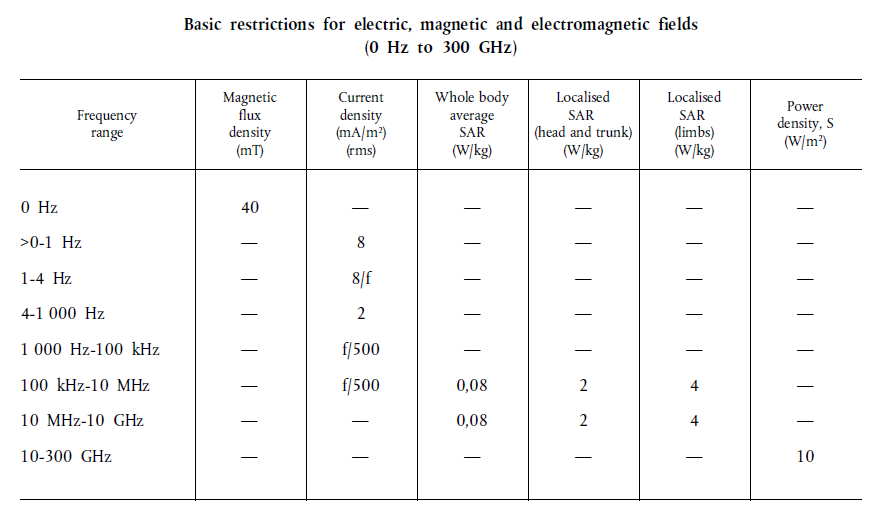 Switzerland (in the base of technical feasibility) and Italy apply up to 0.01 ICNIRP 1998 reference level for PD below 2 GHz. Switzerland uses ICNIRP as the fundamental limit on total exposures, and then adds the Installation Limit Values (ILV) layer; Switzerland also implements precautionary exposure limitations, at places of sensitive use, such as apartment buildings, schools, hospitals, permanent workplaces and children's playgrounds.

Polish exposure limit for the general public, for the RF 300 MHz–300 GHz is 0,1 W/m2. As ICNIRP reference levels above 10 MHz are 2 to 10 W/m2, the Polish levels are 20 to 100 times more restrictive. Polish limits are long standing and influenced by the former Soviet status. In the past, Poland used even more restrictive limits; two zones for exposure limits: temporary presence and permanent presence (such as, including houses); the first zone limit was 0,1 W/m2 and the second was 0,025 W/m2. Since about 1998, this separation disappeared and there is only one limit 0,1 W/m2. Hungary moved from the Soviet to the ICNIRP limits in 2004. Luxembourg reduces ICNIRP level by 20 times; Luxembourg limits are newer.

Some European cities set more restrictive limits. Salzburg assessment value of 1 mW/m2 (0.001 W/m2; equivalent to 0.61 V/m); the Salzburg PD threshold is 4,500 more stringent than ICNIRP 1998 level at 900 MHz and 9,000(!) more at 1,800 MHz. The ‘Salzburg model’ seems not to have been effective under any point of view; it has prevented the development of networks, with no evident health benefit for public health; at the same time, it has not settled down the controversies and probably has not reduced public concern [23] p. 148. In addition to Salzburg in Austria, Perugia and Novara in Italy limit the field-strength to 3 V/m (7.3 % ICNIRP field-strength and 0.5 % PD) and 1 V/m (2.4 % ICNIRP 1998 field-strength and 0.06 % PD), respectively. These city policies often have no regulatory basis. 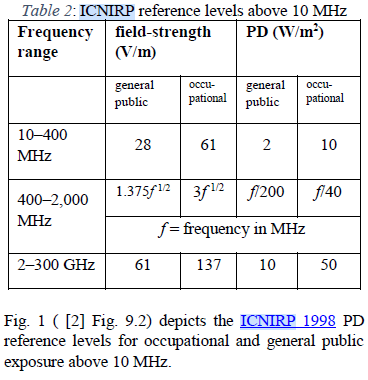 So actually there is some basis to claim there are some places in the EU with extremely tight standards, although the poster doesn't seem to have mapped them quite right.

Also note that this last paper conflicts with the Dutch one (1st table) wrt Luxembourg. I don't know which one is right with regard to that country; they agree on Poland and Italy though (although the latter paper doesn't have footnote with time-based exposure for Italy). Also, the Russian standards are probably explained by the "Soviet legacy" as well.

It's not terribly clear (what Switzerland does, precisely. The Dutch paper says:

Switzerland: An Ordinance relating to Non-Ionising Radiation is in force since 2000. Mandatory exposure limits identical to the reference levels in the EU recommendation apply in all areas accessible to the public. A stricter, precautionary limit for the electric field strength of approximately 10 % of the reference level in the EU Recommendation applies at so called places of sensitive use (for example apartments, schools, children’s playgrounds) near mobile phone antennae, broadcasting and radar installations. [...]

[and the table footnote 23:] ) Limit at places of sensitive use (buildings in which persons regularly stay for longer periods, playgrounds) for individual antenna installations; otherwise reference level in 1999/519/EC applies at all places accessible for the public

tl;dr– This claim doesn't appear to be outright fabricated. The sign correctly lists Australia's time-averaged exposure-limit for the general public as 10,000 mW/m2 (10 W/m2), and some of the other figures, e.g. for Russia and Italy, look correct. Others look off, but haven't done a thorough review of the related laws/regulations be sure about that.

This isn't a full answer, but wanted to share some points as there was some misinformation to correct.

This PDF (from @BrianZ's answer) shows the relevant numbers:

The difference is that Table 7 is for time-averaged exposure while Table 8 is for instantaneous exposure. Presumably both limits must be respected.

@Fizz's answer shows some of the values for other countries in this table. These values appear to correspond to the sign's claims for Russia and Italy, while China's exposure limits appear to be almost 10 times higher than the sign claims. However, without doing a thorough regulatory review, it's unclear what the story behind those claims might be.

W/m2 and W/kg are related measures:

The Australian standard is complicated. But what stands out is a factor 1000 between “peak” and “time average”. There are also numbers for “mW per cm squared”, which you can obviously not just multiply by a factor 10,000.

So as stated, with just a number without context, it doesn’t make any sense. The people in Luxembourg, Switzerland etc. could probably create a very similar chart.

Not the answer you're looking for? Browse other questions tagged law radiation australia .