Were flight reservations centrally managed on wall boards in huge halls in the pre-computer era?

For the first fifty years of scheudled air travel, agents' bookings were done over the telephone. At first, charts recording space on particular flights were sheets of paper. Eventually, for large airlines, space boards covered the walls in a large reservation hall, necessitating binoculars or a telescope for a clerk to see the status of a particular flight at the other end of the hall

It is only for the last 30 years that Lufthansa (LH) flights have been booked using an electronic reservation system (ERS). Before that, booking was done in a huge hall at Frankfurt Airport, with boards mounted to the walls showing the individual flights, e.g., LH 400 Frankfurt-New York, with a space for each day on which they operated, for a period of several months in advance. Employees were in charge of processing all reservation requests, which they received via telephone, via telex or in writing. By attaching a pincard containing the passenger's reservation data to the board, an employee visualized the reservation and ensured that no seat was assigned twice. The hall was so big that binoculars were used for checking the boards for vacant seats on a specific flight.

Claim 1 sounds plausible, claim 2 a bit less but... why not. Also, the above quotes are from publications of Oxford University Press / Springer which should imply some trustworthiness. However:

A picture would be my favorite positive answer here!

I found a full account of pre-computerized reservation systems on Wikipedia's Reservisor article. The account is sourced to a single book, which I cannot get due to worldwide library closures, but compared to the accounts in the question it has far more details on what made the binoculars necessary.

At the time, bookings were handled by a system known as "request and reply". Booking data for any particular flight, say Buffalo to Boston, would be handled by a single office. Here, each scheduled flight was represented by an index card known as a flight card. The offices were normally located at one of the airports involved, but were increasingly centralized at major airports or located at a telephone company switching office to ease the adding or removing of phone lines.

In order to book a ticket on a flight, a sales agent would call into the right booking office and request information on a particular flight. The booking agent would then walk over to a filing cabinet and retrieve the flight card. They would then return to the phone to tell the sales agent if there were any seats available. If there was an available seat, they simply checked off a box, informed the sales agent, and returned the card to the cabinet.

In 1939 [American Airlines] implemented a new system called "sell and report" that reduced the reporting needs by allowing any office to book seats without calling the central office until 75% of the seats were sold. Each office had a board of future flights that consisted of a single hole representing a flight; when the flight reached 75% a large peg was inserted that the booking agents could see, sometimes using binoculars. Once the flight had been pegged, the agents reverted to the older centralized booking system. In an era where aircraft rarely flew with 75% of the seats filled, this system dramatically reduced the number of phone calls.

And with that magical key phrase "sell and report," I was able to find the photo you were looking for! 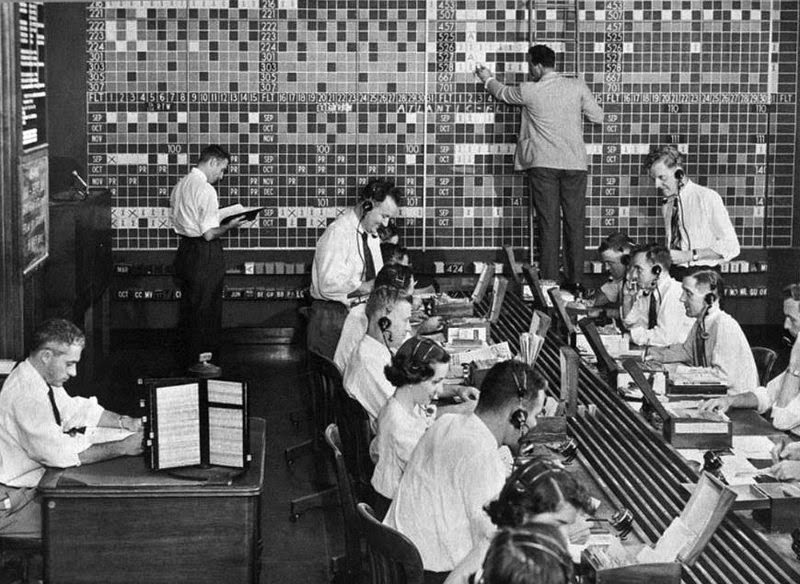 This 1956 photo from PanAm's reservation room matches a written description of AA's system (from Copeland et al. cited below):

A large cross-hatched board dominates one wall, its spaces filled with cryptic notes. At rows of desks sit busy men and women who continually glance from thick reference books to the wall display while continuously talking on the telephone and filling out cards. One man sitting in the back of the room is using field glasses to examine a change that has just been made high on the display board.

Additionally, here is a 1958 photo of the TWA reservation room during the process of partial computerization, printed in the March 1959 issue of Flying Magazine. I cannot read what is written on the walls in this photo, but it appears from the caption that this room used to have a similar system and you can see that binoculars would have been helpful. According to other TWA sources full computerization in a new central building was not achieved until 1961. 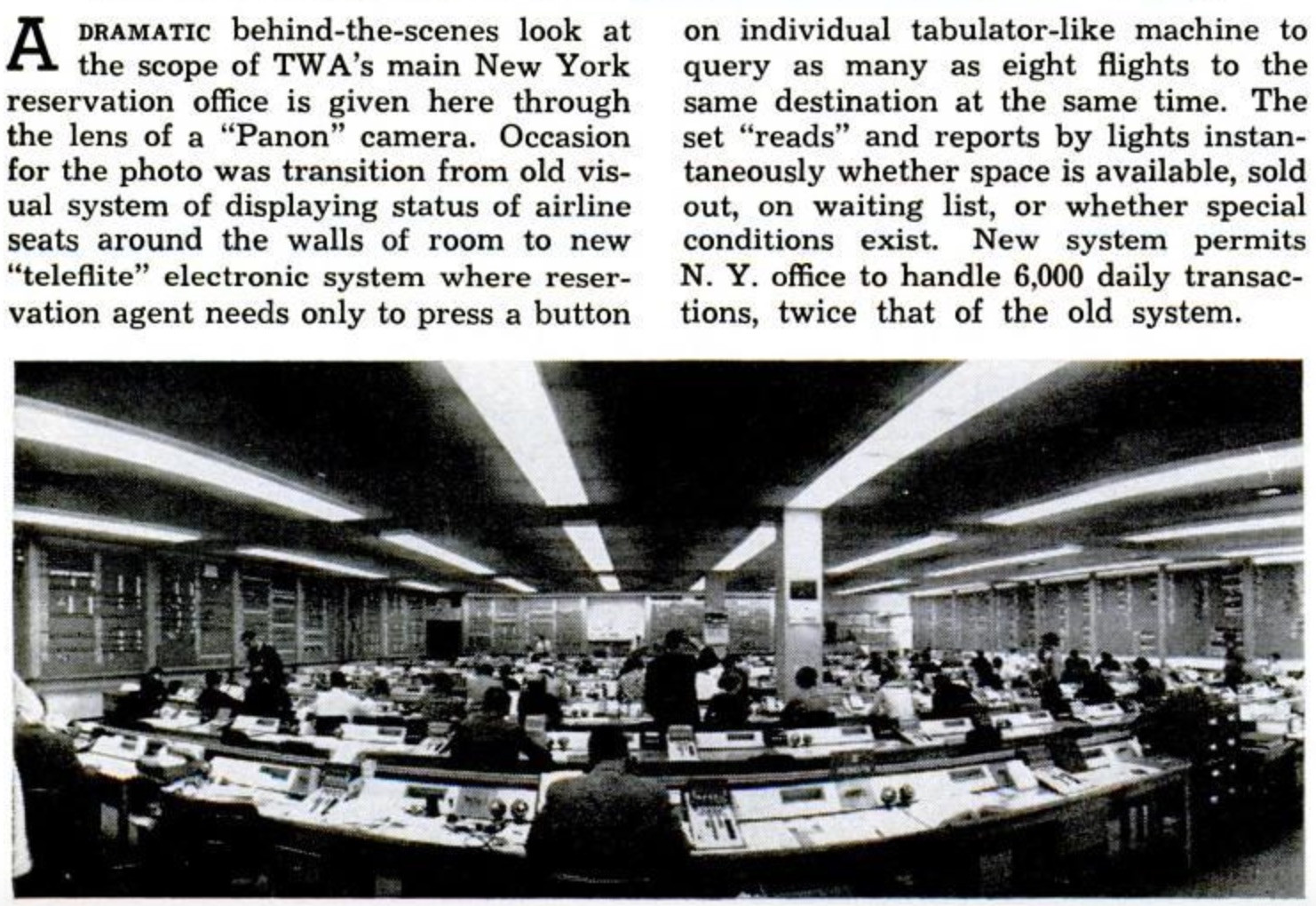 Not the answer you're looking for? Browse other questions tagged history computers aviation .

66
Did planes crash into the WTC on 9-11?
20
Were videos of the Flydubai Flight 981 crash published before the official crash time?
65
Do airlines in North America make around $10 profit per customer?