In the 1910s and 1920s in the US, did some people face death by government officials for challenging "industrial capitalism in American society"?

The Wikipedia article for criminal syndicalism (during World War I; see also the Sedition Act of 1918) writes:

Government officials on the state and federal level ordered arrests, imprisonments and killings of people who challenged industrial capitalism or made militant demands under the pre-existing economic structure.

It cites this source:

During the course of this campaign, which reached its apogee in the 1910s and 1920s, men and women who dared to challenge the increasing hegemony of industrial capitalism in American society, change the social order that accompanied this development, or make militant demands within the existing economic framework, faced arrest, imprisonment, and even death at the hands of federal, state, and local government officials for whom radicalism of this sort was un-American and thoroughly unacceptable.
Ahmed A. White, The Crime of Economic Radicalism: Criminal Syndicalism Laws and the Industrial Workers of the World, 1917–1927, Oregon Law Review 85, no. 3 (2006): 652. (pdf, p.650)

The arrests and imprisonment are well-documented, but I'm skeptical that it led to actual death. I feel like this is embellished or exaggerated.

Question: In the 1910s and 1920s in the US, did some people face death by government officials for challenging "industrial capitalism in American society"?

Amid a miners’ strike, county sheriff Harry Wheeler and some 2000 so-called deputies captured at gunpoint over 1000 men and, deeming them IWWs or otherwise subversive, deported them by train to the New Mexico desert. ... Soldiers at a nearby encampment saved the deportees from death by exposure ...

The Bisbee Deportation described in the book, in which Harry C. Wheeler "arrested" 1200 striking miners at machine gun point and then abandoned them in the desert is well attested by other sources.

In 1917, during another strike at the Bisbee mines, he deputized and armed two thousand citizens, and sent them out at dawn to arrest striking miners and sympathizers, and march them to the Warren ballpark. He supervised the proceedings with a loaded 7.62 mm. machine gun in an open touring car. 1,185 miners were loaded into cattle cars and taken to the New Mexico desert where they were abandoned. Wheeler took responsibility for the deportation, although he was acting on instructions from the mine operators, and was later indicted along with 224 others on state kidnapping charges; those charges were dropped.

That alone should be enough to show that at least some significant numbers who went on strike were kidnapped and were deliberately exposed to serious risk of death by government officials.

A quick glance through those Wikipedia pages that exist for strikes and even "labor wars" quickly confirm these numbers.

One example for such wars would be the Illinois coal wars with around 24 deaths.

Another of these wars even featured machine guns and high powered rifles, West Virginia coal wars. Given that initial number and quality of arms involved it is quite surprising that the pivotal battles at Matewan and Blair Mountain only cost the number of 50–100 deaths on the side of labor, with 985 people arrested. Nevertheless Wikipedia calls this confrontation the largest insurrection in the United States since the Civil War.

Although the claim to investigate here is quite vague. "Facing death" is quite easily true if police, strike breakers, mobs, and 'the' mob (mafia), Pinkertons or National Guard just start shooting crowds.

The strikers had been trying to work north, back to President's Island and then to Memphis. In an open battle the posse killed two strikers and captured nine. At more or less the same time, Patterson alone escaped to the steamboat James Lee and admitted his story, but was extracted from the boat, taken ashore, and shot. The nine prisoners under guard by the sheriff's men were intercepted on the road by a masked lynching party, greatly outnumbering them, that took the prisoners and hung them one by one.

In just one of dozens of Streetcar Strikes, which

From 1895 to 1929, streetcar strikes affected almost every major city in the United States. Sometimes lasting only a few days, these strikes were often "marked by almost continuous and often spectacular violent conflict," at times amounting to prolonged riots and weeks of civil insurrection.

The one in San Francisco 1907 stands out a bit with 31 confirmed deaths and 1000 inhuries.

The Lattimer massacre was the violent deaths of at least 19 unarmed striking immigrant anthracite miners at the Lattimer mine near Hazleton, Pennsylvania, on September 10, 1897.

An 'facing death' is certainly part of the show if in an aftermath of such confrontation you get 'military rule' with locked and loaded rifles the feature fixed bayonets and a ready to deliver lead with a frickin gatling gun. (Colorado Labor Wars 1903–1904).

A quick listing though a small collection found on Wikipedia's List of worker deaths in United States labor disputes gets into the 'hundreds killed' figure quickly. It lists 898 deaths from direct conflict with "Law enforcement and companies' militia, armed detectives and guards", 25 cases of capital punishment and 327 deaths caused by "vigilante, strikers, mob and hate group".

That list is quite incomplete of course. An alledgedly first comprehensive statistics attempt – albeit more like conservatively establishing a lower limit – is here:

Sometimes violent contention becomes fatal; blood is spilled and people killed in the course of the struggle. In the United States from 1877 through 1947, there were no less than 270 strikes wherein at least one person was killed. The earliest recorded US strike occurred in 1775 when New York printers struck for higher wages, and won. Yet by all indications the first strike to become lethal did not take place until 1850, when two striking tailors were killed by police. However, between the 1870s and the late 1940s, a whole new "cultural epoch of contention" was opened between capital and labor, one in which lethal industrial violence was relatively common. 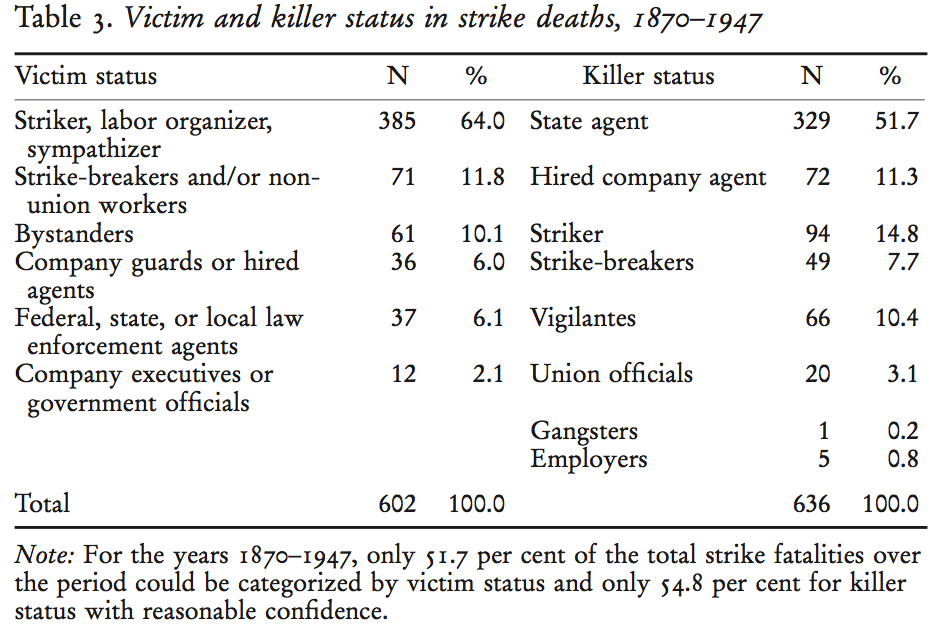 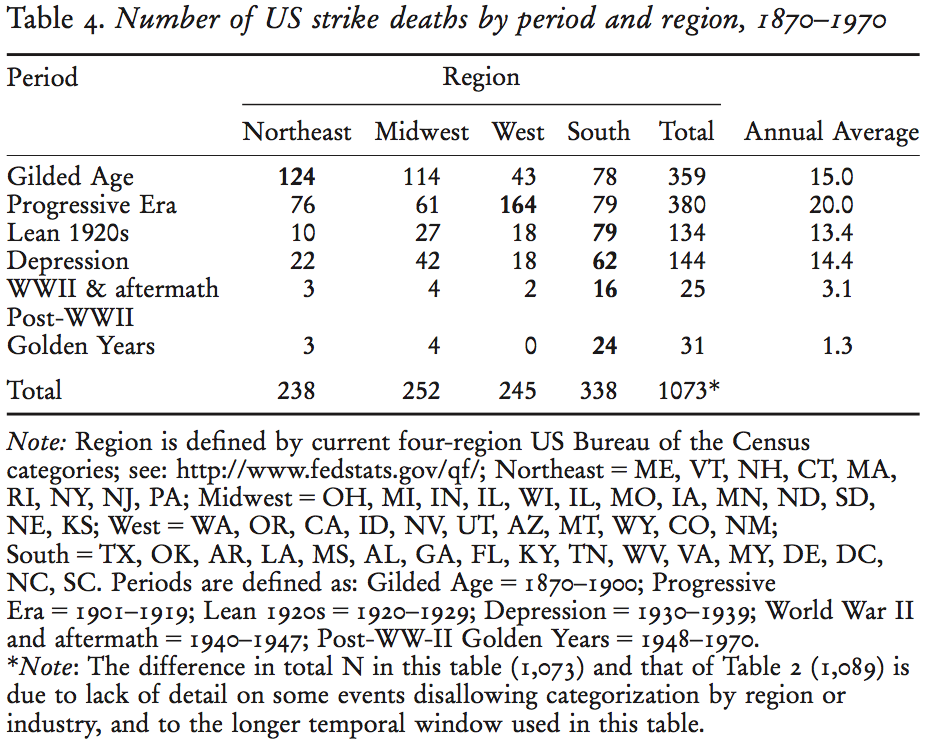 Does the Battle of Blair Mountain count? According to the summary on a longer Wikipedia list of such incidents, it was:

the largest labor uprising in United States history and the largest organized armed uprising since the American Civil War. During an attempt by the miners to unionize, and following the murder of Sid Hatfield, 10,000 armed coal miners confronted 3000 lawmen and Baldwin-Felts strikebreakers, who were backed by coal mine operators. In the summer of 1921 in Mingo County, hundreds of miners were arrested without habeas corpus and other basic legal rights. Talk spread of a march to free those confined miners, end martial law, and organize the county. In Kanawha County, up to 13,000 miners gathered and began marching toward Logan County on August 24. The reviled anti-union sheriff of Logan County, Don Chafin set up defenses on Blair Mountain, with the nation's largest private armed force of 2000. By August 29, battle was fully joined. Chafin's men, though outnumbered, had the advantage of higher positions and better weaponry. Private hired planes dropped homemade bombs on the miners near the towns of Jeffery, Sharples and Blair. Army bombers were used for aerial surveillance. Sporadic gun battles continued for a week. Up to 30 deaths were reported by Chafin's side and 50–100 on the union miners' side, with hundreds more injured. On September 2, federal troops arrived by presidential order, and the miners started heading home the next day. About one million rounds were fired in the battle.

Of course, the strikers/miners themselves were armed, so the challenge itself wasn't exactly peaceful... but note that the claim you've posted isn't predicated on that assumption; it just says (ahem) "make militant demands".

Also, LangLangC's excellent answer seems to have missed emphasizing the next most notable individual event, the Ludlow Massacre

was a domestic massacre resulting from strike-breaking. The Colorado National Guard and Colorado Fuel and Iron Company guards attacked a tent colony of 1,200 striking coal miners and their families in Ludlow, Colorado, on April 20, 1914, with the National Guard using machine guns to fire into the colony. Approximately 21 people, including miners' wives and children, were killed. The chief owner of the mine, John D. Rockefeller, Jr., was widely excoriated for having orchestrated the massacre. [...] Ludlow was the deadliest single incident in the southern Colorado Coal Strike, which lasted from September 1913 to December 1914.

In the larger Colorado Coalfield Strike/War (that the Ludlow event is considered part of):

Between 69 and 199 people died during the strike.

Not the answer you're looking for? Browse other questions tagged united-states history .

10
Did World War II propaganda posters tell people to "Speak American", rather than languages of the enemy?
21
Did the Ottoman government kill ~1 million Armenians during and after World War I?
34
Did the Mexican Government publish a manual for how to illegally enter the US?
17
Did Ehrlichman claim the reason for the Nixon drug war was to criminalize black people and hippies?
7
Do Virgina and Connecticut have the death penalty for those who work on Sunday?
100
In the American west—the world of cowboys and cowhands—was ammunition traded for alcoholic “shots” of a drink?
12
Did some people claim in the 1970s that metric road signs would facilitate a ‘Russian invasion’?
1
Did Emma Willard send a letter to the French government appealing for women’s suffrage in 1848?