Which data are correct for the number of SARS-CoV2 positive tests in France on April 4?

The data published by the John Hopkins University report a sharp spike in new detected cases of SARS-CoV2 infections in France for two days ago (April 4), with 25000 new people tested positive in one day, a number that is an order of magnitude larger than their usual daily counts:

This raises their total to 93k confirmed cases. These numbers contrast with those given by official French sources, see e.g. here 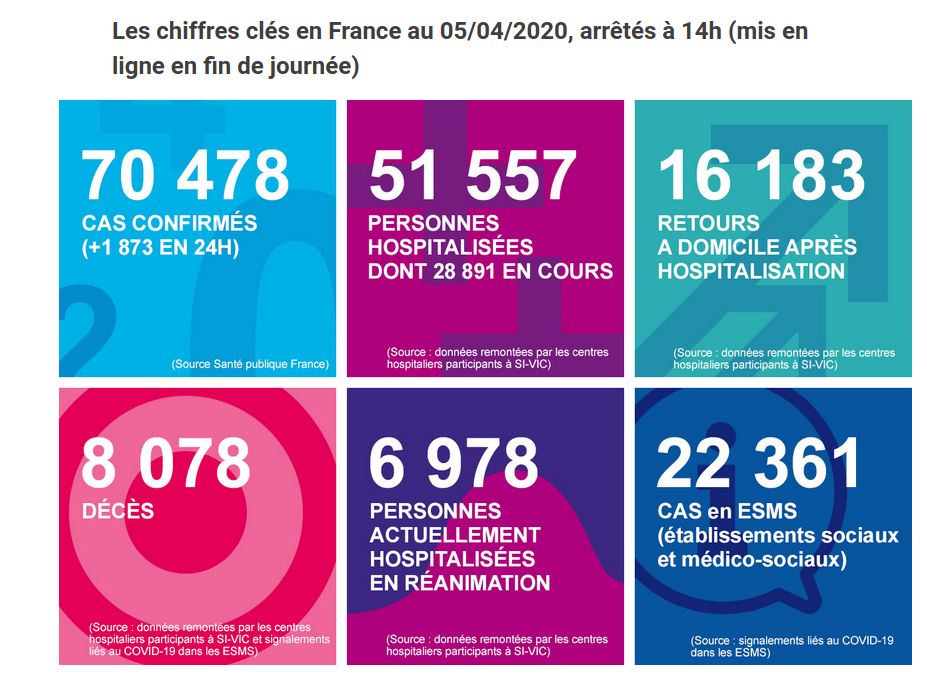 I do not have better historic French data here unfortunately, but the point is that these two numbers were in the same ballpark (fewer than 70k total infections dtected) up to two days ago, but now they differ substantially due to that spike.

See also this plot on Wikipedia, which cites French sources (I cannot locate numbers directly on the linked page [16]) 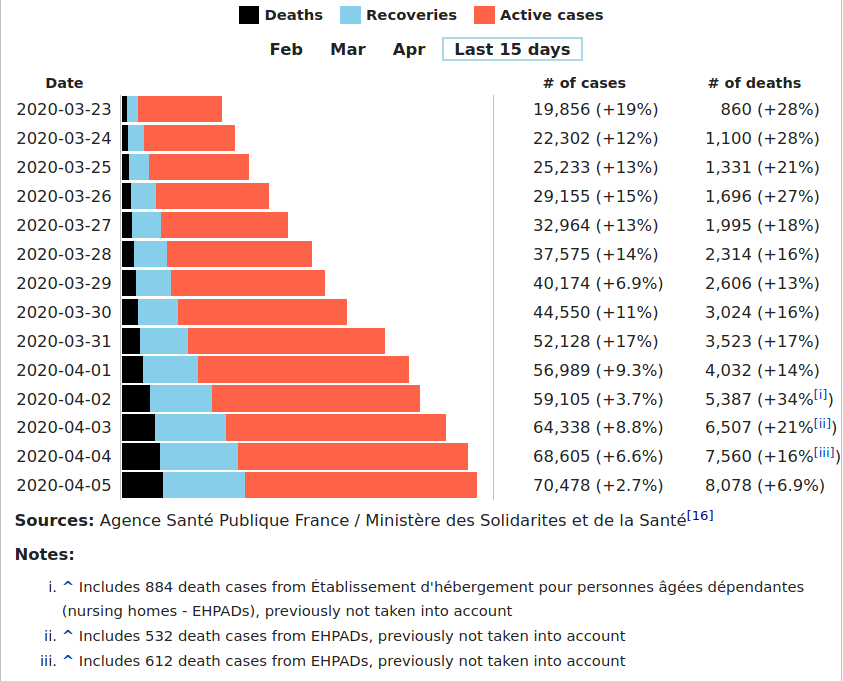 These numbers match reasonably well the JHU cumulative data up to April 4, but then they diverge.

Is the April 4 spike in the JHU data real? Is it maybe due to the JHU data "catching up" with a new definition of new cases? Is it a practical error (e.g., one more zero in the numbers reported in some regions)?

Spikes like this in reported cases are not unusual, see also this graph for China and the explanation for it. There can be various reporting "bottlenecks" that suddenly report backlogged tests.

In France, what seems to have happened on April 3-4 (as Reuters reported):

The number of people who have died from the COVID-19 illness in France jumped by 61% to 6,507 over two days after data from nursing homes were included, and confirmed cases jumped by 44% to 82,165, the health ministry reported on Friday, making France the fifth country to report more cases than China.

Salomon also reported a total of 17,827 confirmed or suspected cases in nursing homes, compared to 14,638 on Thursday, when the nursing home data were first reported.

By including the nursing home data, France now has a total of 82,165 confirmed or suspected cases. It joined the United States, Spain, Italy and Germany as nations that have now surpassed cases reported by China, where the pandemic originated, according to a Reuters tally. [...]

Following criticism about French COVID-19 statistics not reflecting the dozens of people dying in senior citizens’ residences or their own homes, the health ministry on Thursday provided the first data on deaths in nursing homes.

A far as JHU vs official santepubliquefrance.fr (SP.FR henceforth) is concerned, they indeed appear to diverge on "total cases", but the explanation for that is that the left upper "cyan box" in the French dashboard ("confirmed cases") is still showing just the hospital-confirmed cases. You need to add the bottom right, dark blue box "CAS en ESMS" for the cases in nursing homes, which also has a sub-field for deaths therein. (Thanks to @Relaxed for pointing out this; a previous version of this answer incorrectly said that you needed to add the "closed" hospital cases [return home] (green upper-right box), but while those numbers were closer to the ESMS ones yesterday, today there's 10K difference today, which makes my prior explanation clearly wrong in that respect.)

This can be double-checked in a way by looking at a 3rd source, worldometers.info, which cites SP.FR as their data source, but presents the info much more like JHU, i.e. worldometers adds the ESMS cases to the hospital ones. Three large screencaps follow: 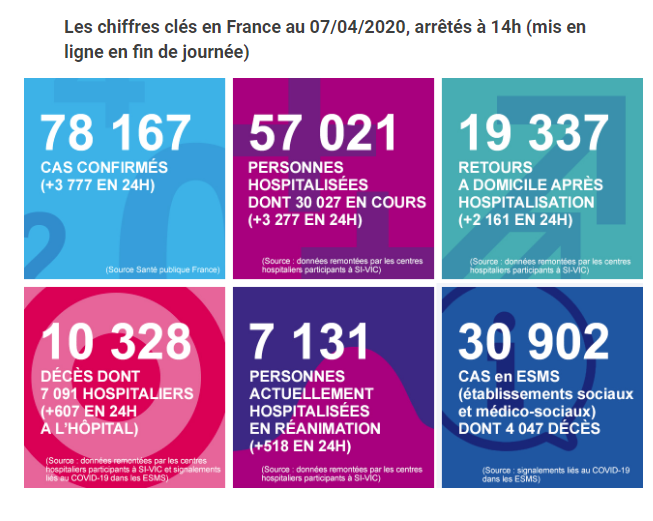 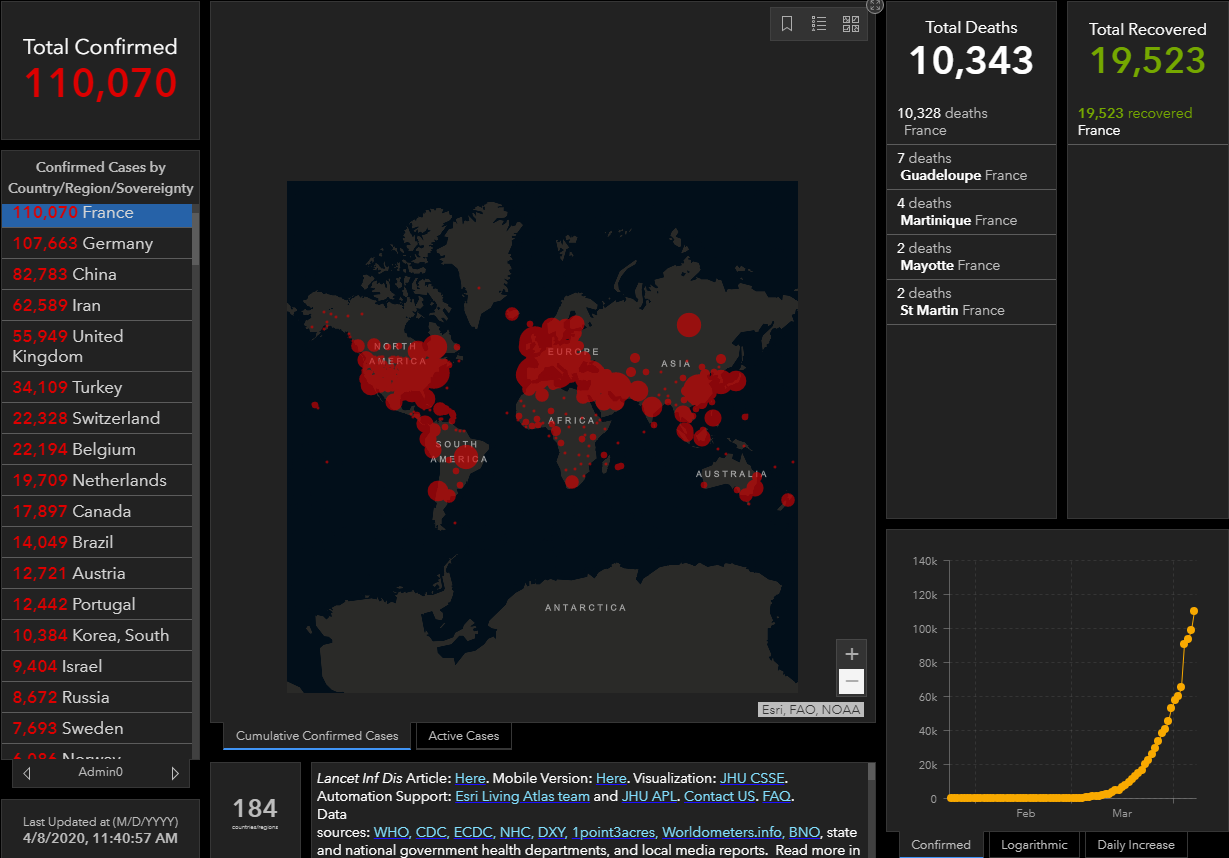 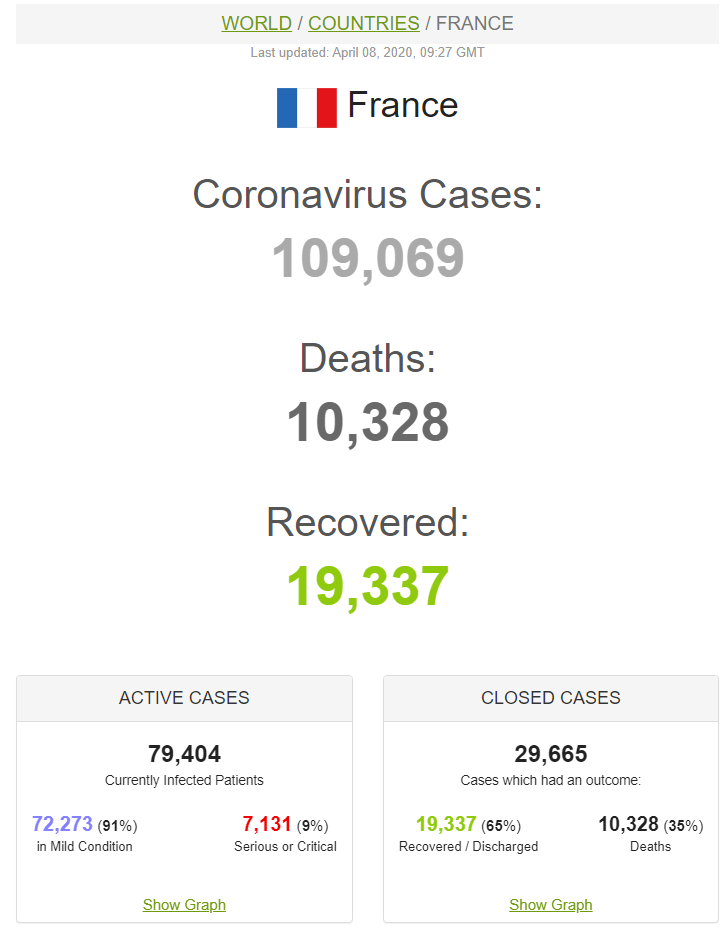 The same worldometers page also makes it clear that the (Apr 3) Reuters-reported spike was real/substantial (that graph is from yesterday): 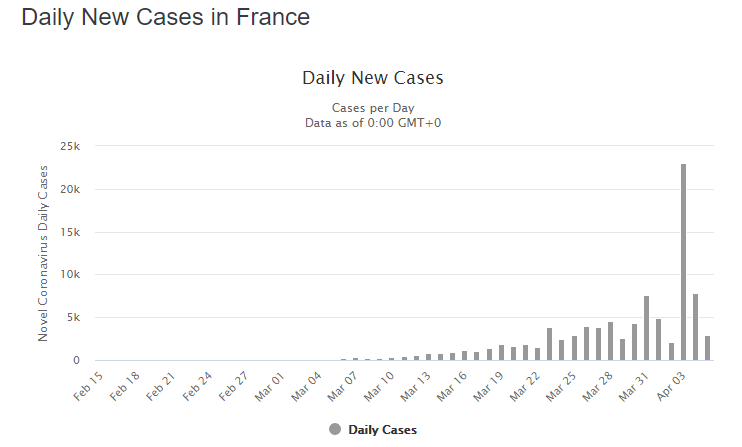 So in summary: yes there was a spike in reported cases (even by the French) due a change in their methodology (including nursing homes) on April 3, and additionally the SP.FR page still separates total cases in hospital-confirmed and ESMS ones...

(I'm still not sure exactly how SP.FR adds the deaths since the ESMS death sub-field is 4K, but their "red box" has 7K hospital deaths... while the red-box total is only 10.3K.)

Not the answer you're looking for? Browse other questions tagged medical-science covid-19 france .

19
Do “new documents” change anything about the Wakefield/MMR vaccine paper/retraction/fraud situation?
14
Are antipsychotic drugs vastly overused in the US?
4
Are positive ions bad for you?
8
Did the CDC aggregate Covid-19 test data from PCR diagnostic tests with antibody tests?
7
Has China eliminated local transmission of COVID-19 within its borders?
11
Does flu vaccine make us more vulnerable to COVID-19?
7
What is the real amount of new Covid-19 cases per week per 100,000 people in Germany?
7
Did Spain have 433.13K deaths in 2020 and 428.44K in 2019?
6
Did “the” (or a) European Court declare that Covid-19 PCR tests are “not fit for purpose”?