Does this photo depict a human flesh market during the Russian famine?

This distressing photo has circulated around the internet including Daily Mail or The Sun as the depiction of people selling human flesh during The Russian famine of 1921–22. However, the source cited by Wikipedia, "Russia 1904-1924. The Revolutionary Years" apparently only specifies the people to be cannibals with their victims. Daily Mail quotes this book on the rumours about such markets but it doesn't connect them to the photograph.

I don't see any evidence presented in the other anwer that this was a "flesh market" photo. To the contrary, some other similar photos have clearly documented circumstances that these were the victims sometimes photographed with the perpetrators, possibly by the authorities. In other cases the people standing next to the victims are unrelated. E.g. the photo below

“This protocol was drawn up in the village of Alekseyevka on January 12, 1922, by the chairman of the Alekseyevsky mutual aid committee Salmanov and a member of the committee, Hvorov, regarding the corpse of citizen Evdokia Minina of the corpse of his dead son. We found that Minina ate raw skin from the head of the deceased son, and her children also gnawed at the skull of the deceased. At the same time, during the investigation, Minina issued the rest of the corpse, which already had one leg, arm and head. Decided: to take away the remains of the corpse from Minina and notify the Bor Society for Mutual Assistance about the terrible consequences of hunger ”(Fig. 17) 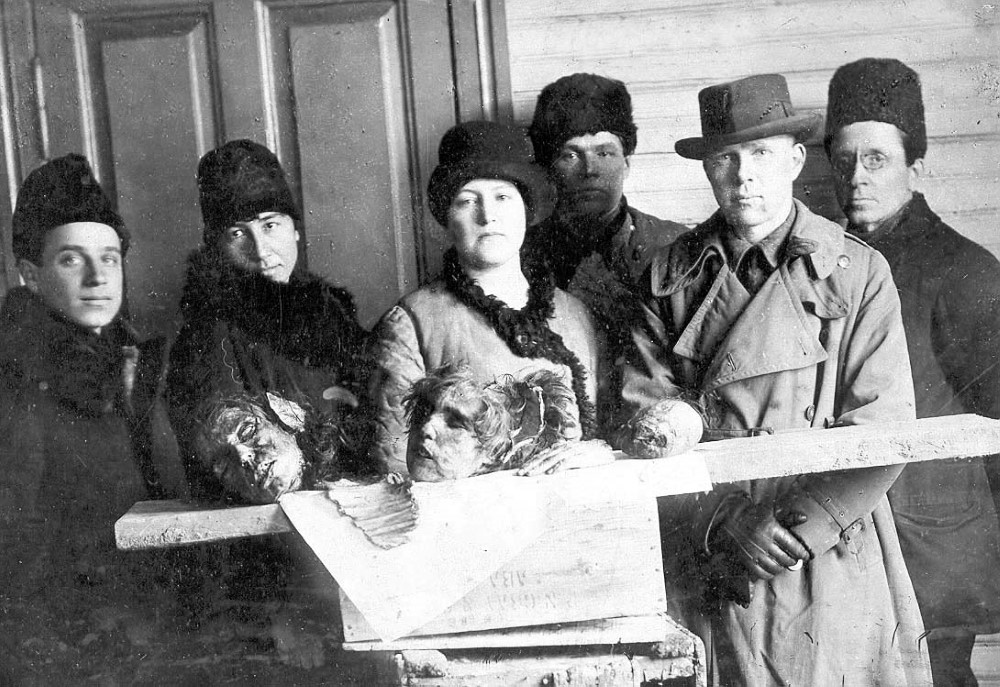 Other photos from the time/region indeed show the perpetrators in front of the victims (I'll spare you the [extra] photos), but he commentary is e.g.

“In December 1921, in the village of Kamenka, Pugachevsky Uyezd, citizens Zhiganova (mother and daughter) and citizen Pyshkina ate the bodies of their two children, then they killed two women: citizen Fofanova, who had previously taken part in eating children, and an unknown old woman 70 years, who came to spend the night. When these reserves ran out, the Zhiganovs also slaughtered Pyshkin.”

But again, there's no indication the photos depict the selling of the victim, as opposed to just depicting the victims and (in this latter case) the perpetrators.

So yes, there was cannibalism in the region during that period, the results of which were often photographically documented. But concluding that (all) these photos show "flesh markets" is clearly ridiculous.

Not the answer you're looking for? Browse other questions tagged photography soviet-union cannibalism .

34
Does this photo of the Brown Lady of Raynham Hall show a ghost?
19
Is the climber's head-lamp backstory for this long-exposure photo feasible?
9
Is this a genuine photo of the supermoon over Gdańsk?
49
Is this photo showing a woman standing in the nude before teenagers real?