Were millions of people infected by SARS?

There's an article circulating on Czech social media that makes the following interesting claim, among others (translation mine):

Data that we currently have available say that in areas where SARS or MERS was active, there are now tens of percent of people who have come into contact with it. In total this means millions, or more likely tens or hundreds of millions of people. I remind you that in official statistics, only thousands of cases were reported.

Do we now have data that support the fact that this many people have been infected by SARS?

The premise behind the article seems to be that SARS was widely prevalent (in some areas), >10% of people were infected, without severe symptoms, and developed antibodies that can now be tested for.

A 2006 systematic review looked at this:

Our meta-analysis, which included all identified studies except those on wild animal handlers, yielded an overall seroprevalence of 0·10% [95% confidence interval (CI) 0·02–0·18]. Health-care workers and others who had close contact with SARS patients had a slightly higher degree of seroconversion (0·23%, 95% CI 0·02–0·45) compared to healthy blood donors, others from the general community or non-SARS patients recruited from the health-care setting (0·16%, 95% CI 0–0·37).

This figure of 0.16% is in stark contrast to the claimed "tens of percent".

Although there are considerable variations in the seropositive estimates reported, it is clear that seroconversion is extremely rare among health-care workers, close contacts of SARS patients who did not develop the disease and members of the general population, including healthy individuals and non-SARS patients. This property of SARS-CoV, perhaps reflecting the evolutionary fitness of the virus, is in stark contrast to other common respiratory agents, most notably influenza where the usual ‘iceberg’ concept of disease applies. Instead the pattern of SARS infection in the community can paradoxically be represented as an inverted iceberg. 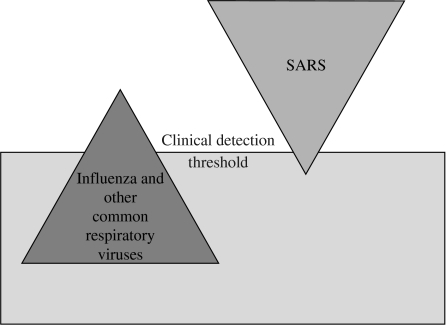 Not the answer you're looking for? Browse other questions tagged epidemiology immune-system virus .

12
Does passive smoking kill 600,000 people every year?
8
Will 25% of people in Western society develop a mental disorder during their life?
2
Does treating people with mild hypertension improve their outcomes?
4
Are blue lights giving people cancer?
2
Have few, if any, studies on the health effects of particulate air pollution measured the actual exposure to particulates?
19
In February 2020, did Tencent release accurate statistics for the Wuhan coronavirus that were 10 times the official figures?
3
Has SARS-CoV-2 been purified in a lab? If not, does this imply that the PCR test for it is not specific?