After 2 years in office, had Obama kept more promises than Trump? [closed]

Ask Question
Asked 2 months ago
Active 1 month ago
Viewed 316 times
-1
Closed. This question needs details or clarity. It is not currently accepting answers.

This chart has been shared around social media. 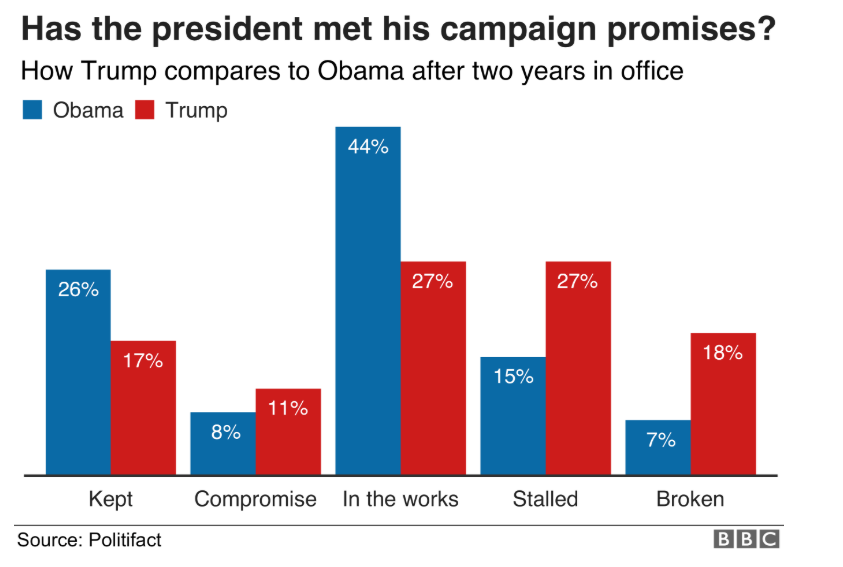 It is from a January 2019 BBC News article, and cites a Politifact article as the source for the data.

Are these figures accurate?

These figures are meaningless, because while "campaign promise" functions grammatically as a countable noun, it functions politically as uncountable.

To take just one example, does Obamacare count as keeping a promise to address the number of uninsured Americans, or breaking a promise to let you keep your doctor, or two promises (one kept, one broken). It's a 2000 page law, virtually every single paragraph in there can be matched to multiple political statements made by Obama or his spokespeople and determined to either keep or break the promise made.

Since there is no consistency in the size of the promises being counted, nor in the amount of legislation required to "keep" one, trying to compare the resulting counts is an exercise in futility. Or rather, it is an exercise in opinion and not in fact.

Skeptics doesn't analyze opinions, only factual claims, and there are none here.

Not the answer you're looking for? Browse other questions tagged united-states politics donald-trump barack-obama statistics .

20
Does Trump spend $10m/month travelling compared to Obama's $1m/month?
25
Did the FBI plant an informant in the Trump campaign during the Obama administration?
18
Correlation between BSE/CJD and Brexit vote
139
Did Republicans take 10 of 13 Congressional seats in the 2018 North Carolina general election with roughly the same number of votes as Democrats?
14
Have textbook prices in the US more than doubled in the last 15 years?
7
Did Marriott International issue a statement stating that they would decline any requests to use their U.S. hotels as detention facilities?
79
Have China and India more than doubled carbon emissions since 2000 while U.S. emissions have fallen?