Is it probable that the UK COVID-19 death count will eclipse China's? [closed]

Ask Question
Asked 2 years, 1 month ago
Modified 4 months ago
Viewed 2k times
4
Closed. This question is off-topic. It is not currently accepting answers.

it is hoped the steps which have been taken, which are essentially about suppressing the virus, will limit deaths to 20,000.

In an appearance before the Health Select Committee in March, Sir Patrick Vallance, the government's chief scientific adviser, said that would be "horrible", but still a "good outcome" given where we are.

However, the Worldometer puts China's confirmed death count as relatively stable at 3,300 as of 29th March.

I find those numbers impossible to believe given that the UK had more time for preparation, a smaller population size, and has a good health care system.

What am I missing?

More than 20,000 people have now died with coronavirus in UK hospitals, the Department of Health has announced. [...]

The government's figures do not account for deaths that have happened in care homes, at home, in hospices or elsewhere in the community. These are measured separately by the Office for National Statistics, based on death certificates, and a weekly figure is announced each Tuesday. Last week that figure indicated that there were at least 1,662 deaths, up to 10 April, that were above the hospital-based number.

On the other hand (same source), the good news is that the peak of daily deaths (in hospitals) seems to have passed in the UK. (There's a graph in the article on that last aspect, but I'm not posting it here since it doesn't have cumulative deaths explicitly plotted in it, so someone might mistakenly think it's answering the OP's question in the negative, at a [first] glance.)

It's probably premature to come to a firm conclusions on this, but the BBC has a newer article (March 28 vs 25) that additionally mentions that:

A paper released on Friday projected that fewer than 7,000 people would die of coronavirus in the UK in total. This figure is much lower than that in the modelling used by government.

So where did they get their numbers from? To get to these projections, Prof Tom Pike used the trajectory of death numbers in China to predict the progress of the UK and other countries' outbreaks.

But experts in viruses and epidemics have cautioned against assuming that countries will follow the same trajectory, even if there are similarities in early figures from each country.

There are some things that will be the same the world over like how long the virus takes to become infectious in someone's body. But how an outbreak develops after that depends on what measures countries take and when they act, and China brought in restrictions sooner than many other countries.

7,000 is still above China's present death toll, of course. But any number of things can happen. China is flirting with reducing their internal lockdown and simultaneously has imposed a travel ban on foreigners due to a sudden rise in "imported" cases. They even discourage their own citizens from returning now (same link). The (speculated, but rather obvious) reason for that is that

China is now fearful of a second peak as the pandemic accelerates overseas.

I think it's still an open question whether China will manage to avoid that or not. In the latter case, their death toll could well rise again.

And yes (as suggested in some comments under the question) some people, even some experts, doubt the accuracy of the statistics coming from China. As far as I can tell most doubts relate not to underreporting deaths but to the asymptomatic cases not being tested/reported so, e.g. RFERL says:

doubts have dogged China's statistics despite an assurance from a joint UN-Chinese epidemiological mission in late February that the country's "numbers are real."

Scattered reports have leaked out of the country this month hinting at the possible suppression of infection numbers by simply refusing to test people who fear they might be ill.

I'm not sure how that can be quantitatively incorporated in an analysis/answer though. Even if deaths are correctly reported though, if infections are not, there's indeed a higher chance that there could be another "peak" of infections in China, but quantifying this seems rather tricky.

I'm also unsure what the comment below is complaining about, but in case this needs saying, for the past two weeks, China has experienced only a handful of Covid-19 deaths per day, so it makes sense to simply consider their current total a good approximation (e.g. 80-90%) of the ultimate/projected total, unless there is a 2nd large wave of infections over there.

Regarding the "what am I missing" soft-question part... The predictions are highly sensitive to the assumed Rt, the "case-multiplication factor" after containment measures have been enacted.

In China, the initial containment effort was estimated to reduce the R0 of 2.38 to a Rt of 1.36. Thanks to tighter travel and movement restrictions, it later fell to 0.98. These numbers include both confirmed cases and the estimated unconfirmed mild and asymptomatic cases. If examining only the impact on the most severe and confirmed cases, the later interventions decreased Rt to 0.36. Using this number as a comparison, we can now estimate the impact of currently implemented intervention strategies in relation to interventions in China over a period of one year from the first case – see below: 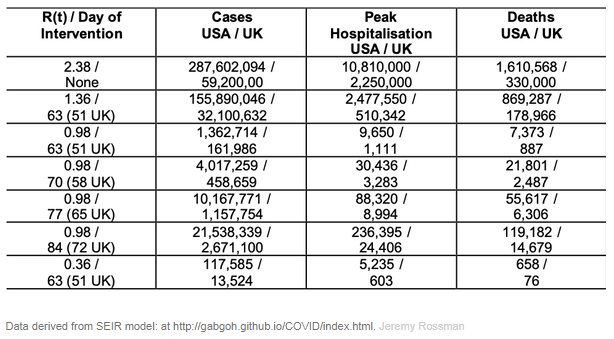 So yeah, if the UK managed a lockdown as tight as China's was (after they figured out they need one), you'd only see much more modest number of UK deaths, between 2,400 and 6,300, depending on when exactly the thigh lockdown is actually implemented. But the more pessimistic modelling assumption for Western democracies (like the one used in the UK gov't paper) is that they probably won't be able to produce a lockdown as tight as China's.

In Wuhan the internal public transport was completely shut down, as was external transport, e.g. trains didn't even stop there. People were not allowed out of their homes without a mask, there was total isolation for anyone infected, even with mild symptom, in public facilities (not at home) and family visits were not allowed. Here's an account from the Guardian:

Initially people were allowed out of their homes, but restrictions soon tightened. Some areas limited outings to one family member every two days to buy necessities. Others barred residents from leaving, requiring them to order in food and other supplies from couriers.

Later the policy became even more aggressive, with officials going door to door for health checks, and forcing anyone ill into isolation. [...]

Most buildings have security guards monitoring temperatures of anyone going in. Residential compounds are closed to all but their inhabitants.

Masks became ubiquitous across the country, and in many places required; the state-owned tabloid Global Times shared footage of authorities using drones to scold people in Inner Mongolia - more than 1,000km from Wuhan - who had gone out without masks.

A China CDC official has just said in an interview

Q: What mistakes are other countries making?

A: The big mistake in the U.S. and Europe, in my opinion, is that people aren’t wearing masks. [...]

Q: People who tested positive in Wuhan but only had mild disease were sent into isolation in large facilities and were not allowed to have visits from family. Is this something other countries should consider?

Q: Spread in China has dwindled to a crawl, and the new confirmed cases are mainly people entering the country, correct?

A: Yes. At the moment, we don’t have any local transmission, but the problem for China now is the imported cases. So many infected travelers are coming into China.

If you want a brief US parallel too:

“I mean, looking at what we’re seeing now, I would say between 100,000 and 200,000 … deaths,” Fauci told CNN’s State of the Union, though he added: “I just don’t think that we really need to make a projection, when it’s such a moving target that you can so easily be wrong and mislead people.”

The estimates in the BBC article are based on this 16 March 2020 report from the Imperial College COVID-19 Response Team : Impact of non-pharmaceutical interventions (NPIs) to reduce COVID19 mortality and healthcare demand

A minimum policy for effective suppression is ... population-wide social distancing combined with home isolation of cases and school and university closure.

If that was strictly observed for some months, the paper says (with some qualifications) total deaths in two years would be 20,000 in Great Britain.

The UK did indeed seem to have more time to prepare than some other countries. However, perhaps the UK did not act fast and far enough. Before 23 March, UK Gov was not publicly saying those measures were on the table. Indeed it expressed a different policy.

If you look at the shapes of the Worldometer charts representing deaths in China and the UK and compare the curves or 'trajectories', China appears to have flattened its curve (or "stabilised" it) but the UK's still seems to be increasing exponentially.

Compare them on the same chart. 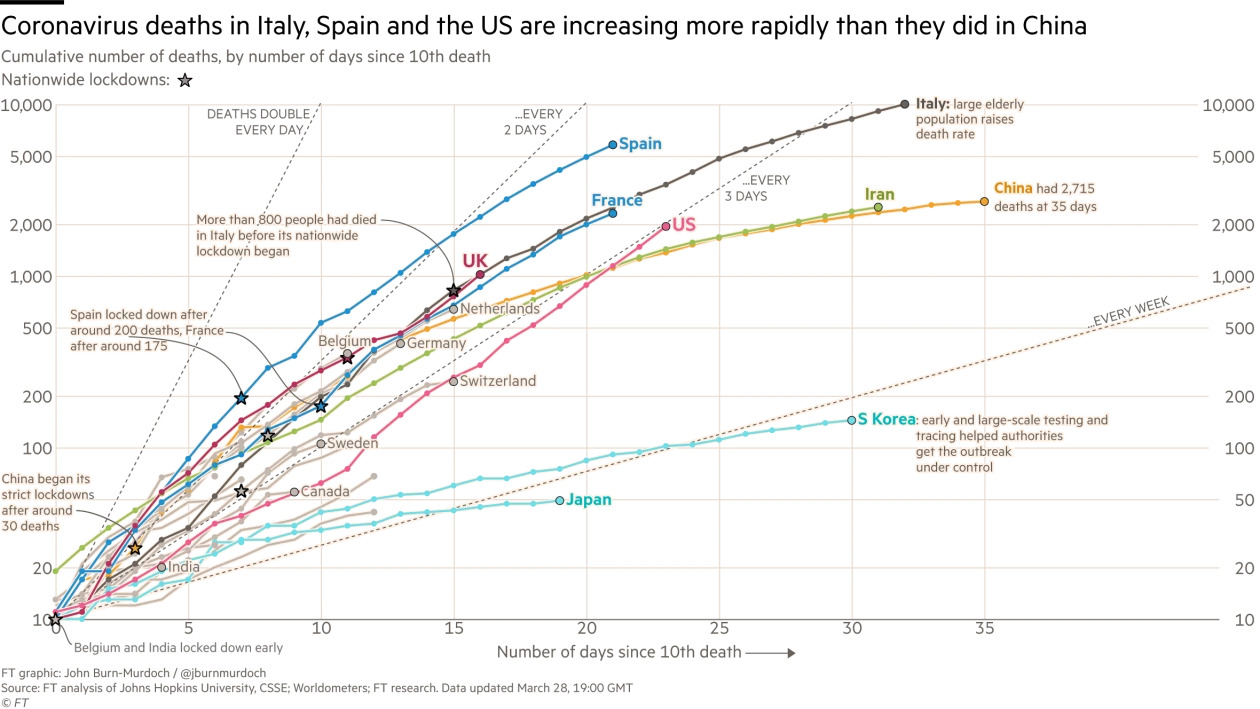 Hopefully, in the coming days or weeks the curve representing UK deaths should move towards flattening out because of the new policy. But people were infected while the UK had the previous policy, some of them will be hospitalised and some of those will die.

Note that Wolfram Alpha won't let me link the calculation any more but you can try it yourself.

Not the answer you're looking for? Browse other questions tagged united-kingdom china covid-19 .

7
Is there "almost no science" behind social/physical distancing to fight the spread of an epidemic?

7
Will China's Three-Gorges Dam slow down Earth's rotation?
64
Were COVID-19 patients in Wuhan welded into their apartments to enforce the lockdown?
6
Was the Wuhan Center for Disease Control & Prevention hosting coronavirus-infected bats near the COVID-19 initial outbreak?
12
Did three researchers (connected to "gain of function" work) at the Wuhan Institute of Virology fall ill with Covid-19 symptoms in Nov 2019?
26
Is Huang Yanling (a Wuhan virology researcher) the world's first COVID-19 patient?
1
Does China's official position reject the "wet market origin theory" of COVID?
6
Were the Chinese tennis events cancelled by the WTA in relation to Peng Shuai already cancelled because of COVID-19?