Doctors and Handwriting: is it so bad that it inadvertently kills patients?

According to a lot of people, doctors have awful handwriting. First, is this true - is there a statistically significant proportion of doctors who have handwriting which control groups would find hard to read? Secondly, this article claims that because it is so bad, it can kill patients due to mistakes involving drug dosages, or incorrect surgery, or by other means. Really?

The source behind the Time article is a July 2006 report from the Institute of Medicine entitled Preventing Medication Errors: Quality Chasm Series. A brief (PDF) is available online and the information here is from that.

Some of these “adverse drug events [ADEs],” as injuries due to medication are generally called, are inevitable—the more powerful a drug is, the more likely it is to have harmful side effects, for instance—but sometimes the harm is caused by an error in prescribing or taking the medication, and these damages are not inevitable. They can be prevented.

The number of preventable ADEs is extremely large. The report suggests that a typical hospital patient is subjected to at least one medication error a day. Different studies have claimed 380,000 and 450,000 preventable ADEs per year. The committee behind the report considers these low estimates.

It again considers those numbers low estimates and then notes that none of these studies involve prescriptions that should have happened but never did — errors of omission. The committee concludes with the number 1.5 million preventable ADEs occurring in the United States each year as their lowball estimate which one of the numbers used in the Time article. So far so good.

Unfortunately, the brief does not break down these numbers further. The only mention of handwriting is in a section about how using new technologies can help:

Even more promising is the use of electronic prescriptions, or e-prescriptions. By writing prescriptions electronically, doctors and other providers can avoid many of the mistakes that accompany handwritten prescriptions, as the software ensures that all the necessary information is filled out—and legible.

The note on legibility here is not hardly the focus of the section. While it does admit that poor handwriting plays a part in preventable ADEs, the brief alone does not provide enough reason for the Time article's comments that "Doctors' sloppy handwriting kills more than 7,000 people annually." Digging into the full report, I did find a few more notes on handwriting issues:

Poorly handwritten prescription orders are the chief culprit in miscommunications among prescribing clinicians, nurses, and pharmacists, and have often resulted in serious injury or death due to incorrect understanding of the drug or its dosage, route, or frequency (Cohen, 2000).

Looking closer at the Time article, I realized it may have just been tricky writing:

Doctors' sloppy handwriting kills more than 7,000 people annually. It's a shocking statistic, and, according to a July 2006 report from the National Academies of Science's Institute of Medicine (IOM), preventable medication mistakes also injure more than 1.5 million Americans annually.

The 1.5 million statistic does come from the IOM report but the 7,000 people killed is entirely unsourced. The Straight Dope comments:

The actual stat alluded to - apparently from a 1998 Lancet paper via subsequent reports by the Institute of Medicine - is that each year 7,000 U.S. deaths result from all medication-related errors of any sort, inside and outside hospitals, and not just those tied to poor penmanship.

The Time article was way off the mark with regards to their statistic and juxtaposing that statistic with an unrelated source. But the direct answer to the question, "Does bad handwriting kill people?" is that yes, it can, if it is the underlying cause for an ADE that results in patient death. Is it a rampant problem? Not when compared to the other preventable ADEs.

On June 23, 1995, Ramon Vasquez received the following prescription from his cardiologist. He began taking the medication given to him by the pharmacist on a Saturday morning. By Sunday night, the medication had affected his heart so much that he had a heart attack. He died several days later. 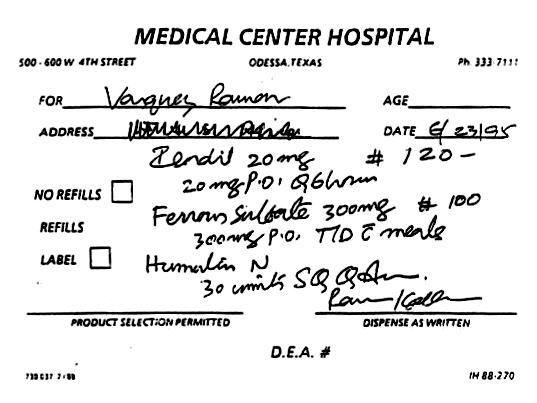 What is the name of the first drug prescribed? Is it Plendil??? Isordil???

The pharmacist who filled this prescription read it as Plendil. The cardiologist who wrote the Rx states that he wrote Isordil.

This case marks the first time that a physician has been found negligent for illegible handwriting.

10
Methadone - remedy that cures or drug that kills?
16
Do physicians that use the paradigm of evidence-based medicine achieve better health outcomes for their patients?
21
Do cats and dogs have saliva that has antibacterial or antiseptic properties?
3
Is there any substance that is shown to kill germs in vitro and shown not to cure illness?
3
Is Theranos the first laboratory that publishes their prices and lab proficiency-testing scores on their website?
15
Is medical error the third leading cause of death in the US?
11
Did doctors/scientists say that breaking the 4-minute mile was impossible?
3
Do statins contribute to dementia?
0
Do doctors recommend that ears should be checked annually?