Do cars primarily built on a Monday or Friday have lower quality?

In his 1971 book Wheels, Arthur Hailey claims that cars that were primarily assembled on a Monday or Friday would suffer from quality problems due to worker performance/absenteeism issues associated with those days. Now, I realize that this was a work of fiction, but as an origin to this becoming a widely held belief, there are folks at Snopes curious about it (and repeat they have heard this from some un-named source), as well as other random internet forums discussing this "fact". And in 1979, Vance Muse wrote a book called "Don't buy a car made on Monday" which appears to be an advice book!

So, while the origin seems to be a work of fiction, is there any truth to this widely-held belief?

While it's obvious, as @Adam Davis points out, that complex products, like cars, are not manufactured in a single day, it may still be of interest when critical parts of the car, such as safety belts, were installed, if Mondays and Fridays are bad days for manufacturing.

Ruckart and Burgess (2003): Human error and time of occurrence in hazardous material events in mining and manufacturing. Journal of Hazardous Materials, 142:747 who looked at the distribution of accidents reported to the "Hazardous Substances Emergency Events Surveillance (HSEES) system maintained by the Agency for Toxic Substances and Disease Registry (ATSDR)", found that

Which means that on average 17.0% of accidents occur on Mondays or Fridays, respectively.

There is a very similar trend in construction, using data from the Occupational Health and Safety Agency (OHSA), as shown in the Master thesis by Ashwini Bhide from Ohio State University (p. 33). Note that there is no normalization regarding hours worked, and the author states that "It could be due to the obvious reason that the rate of construction activity decreases on the weekends. The high rates (20%) on Tuesdays and Thursdays could not be explained." 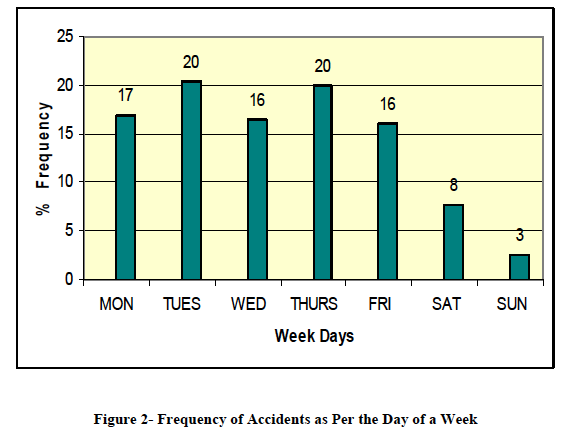 In summary, if we can use workplace accidents as indicators of overall concentration levels of workers and consequently manufacturing quality, the data suggest that there is overall little difference between weekdays, with Mondays and Fridays generally being best. How come? It may just turn out that most workers don't get totally wasted on the week-end, but actually relax, and that on Friday, the prospect of relaxing on the week-end makes people happier and thus more motivated to do a good job.

Not the answer you're looking for? Browse other questions tagged manufacturing road-vehicles .

9
Seat belts in cars save the lives of occupants in cars, but do they lead to lower deaths for all road users?