Many websites that give tips on increasing mileage mention (typically in passing) that you should not accelerate hard.

(to be fair, The third hit does not mention this and merely comments on the fact that "Letting up on the gas often eliminates the need for braking", which is not what I'm skeptical about.)

I've also had multiple friends comment (sometimes claiming personal experience) that I should not floor to save on gas.

However, it runs contrary to my personal experience with my current car, which I happen to share with a person that has a very different driving style. I typically get better mileage while mostly flooring when accelerating, but anticipating braking quite a lot more.

From a physics perspective, it does not seem obvious why this would be the case. After all, the chemical energy from the gas is converted to kinetic energy and heat (and wasted gas?).

So... Why would the efficiency ratio significantly change if I floor the gas pedal? Does it at all? Is it engine/car dependent ?

It´s a tricky question, one that can not accurately be answered without having access to the specific efficiency data of your car.

Apart from the actual acceleration energy needed for accelerating a certain mass to a specific speed you lose Energy in three other places.

Here is an example of such a map - with source article 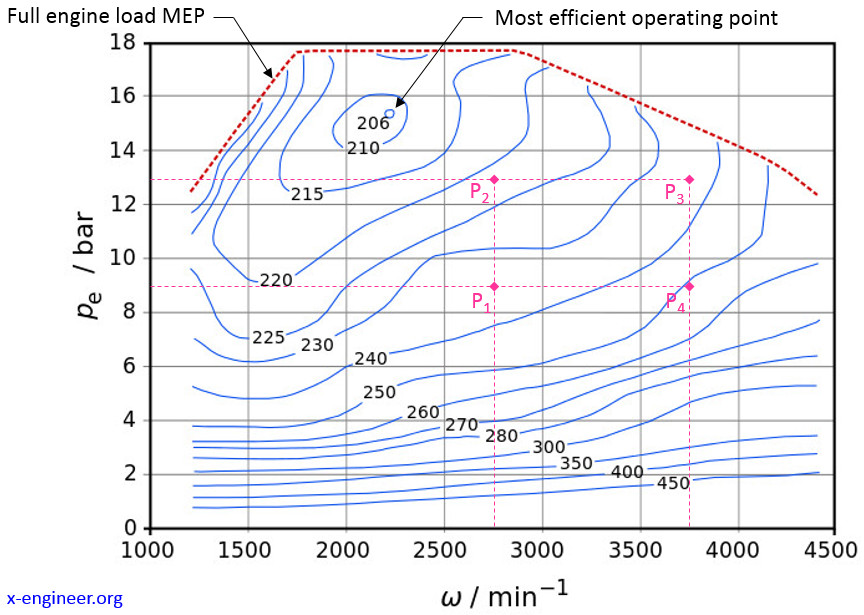 So the Answer is: It depends, are you able to keep your engine at such a sweet spot when accelerating that you can make up for the losses in air-resistance?

Flooring the pedal is fine if you make use of the energy you've consumed, and keep going.

It's a recommended technique: Burn and Coast (or Pulse and Glide) tries to make best use of the accumulated kinetic energy. Apologies for the Wikipedia link: here's another recommendation of coasting, which also points out the value of working the engine in its most efficient range.

There is a possibility that by opening the throttle too much, the engine burns too rich a fuel/air mixture and wastes fuel, but modern engine management systems usually take care of that by interpreting your throttle input as merely a request to go faster - the ECU then decides how much more fuel it should use, possibly optimizing for efficiency over outright performance.

What really ruins mileage is braking, because you're throwing away that kinetic energy you've built up and discarding it as heat.

I think the reason for the advice not to accelerate hard is that in traffic you would soon have to slow down again, in which case the rapid acceleration costs you more fuel, but brings no benefit.

...with the caveat that there are some slightly conflicting opinions.

If you slowed your 0-to-60-mph acceleration time down from your current 10 seconds to a more normal city pace of 15 seconds, you'll feel the savings immediately.

Up to 37 percent savings, average savings of 31 percent

The method, summarized below, is found HERE:

Now, I really, really, really wish they had isolated their variables. I don't know why they considered it necessary to vary the braking style and top speed in these cycles. There's at least some indication here, though, that accelerating faster decreases fuel economy. I consider "flooring it" to be a subset of "accelerating faster."

So... there was a loss due to aggressive driving, but it's not that high and doesn't square with what Edmunds.com said, either (Edmunds.com had much higher loss reports). This paper also didn't isolate all variables, but went with a "driving style."

From The Times' article:

"People were shifting too late from first to second, and from second to third," Dr. van der Voort said. People saved the most gasoline when they pushed down on the accelerator briskly and then shifted quickly, keeping the revolutions per minute low -- not by accelerating very gently.

Further analysis revealed that drivers without support [the dashboard display instructing them on optimum driving habits] shifted significantly more times too late from 1st to 2nd gear and from 2nd to 3rd gear than drivers who received support (and drove more fuel-efficiently). No significant differences between the groups were found with regard to shifting from 3rd to 4th gear.

So, we can see that late shifting results in a decrease in fuel economy. In automatic transmission cars, "flooring it" will result in the car being kept in as low of a gear as possible, thus bypassing the optimum shift point for maximum fuel economy.

I really wanted to answer this in terms of power curves and torque, but could not get my head around enough to put the facts together. I think the real why of this answer would lie in keeping the power output of the transmission (which is the torque of the engine "filtered" through your gear box) matched for the speed of the vehicle. My attempts at digging there tended to come up primarily with "hot rod" types of sites that are primarily focused on maximizing acceleration, not fuel economy.

At 100% throttle, the ECU leaves "closed loop" and enters "open loop" fuel enrichment mode. This is bad for fuel consumption. The most efficient throttle opening at which to accelerate is just before fuel enrichment mode. Typically 85% throttle is quoted as a safe amount to gain best results over at ecomodder.com where this is discussed as much length. See 'WOT' (Wide Open Throttle) discussions here:-

Here's another: https://ecomodder.com/forum/showthread.php/speed-vs-mpg-6th-gear-wot-24831.html "at WOT (Wide Open Throttle) the ECU enters what is called a power enrichment mode. Typically this involves temporarily entering open loop mode taking the O2 sensors out of the fuel calculation equations. Power enrichment mode is not desirable when you have fuel economy in mind not only because you are using large amounts of fuel to travel the same distance but since the ECU is ignoring the O2 sensors the engine typically ventures into a rich burning state which can be bad for plugs, cat converters, etc."

6
Does the type of oil you use in your car make a difference?
15
Does the gasoline of different gasoline brands have any real acknowledgable difference?
21
Does waxing your car have a long-term beneficial effect on the paint-work?
22
Does the US ban high-gas-mileage cars?
6
Does the time of day affect fuel economy?
17
Does locking your car doors reduce theft?
7
Does the Lexus LFA need digital gauges because analogue ones are too slow?
6
Does cryogenic treatment of automobile rotors increase performance?
2
Does using a neck brace reduce damage taken in a car crash?
24
Does decreasing an urban speed limit from 50 km/h to 30 km/h increase air pollution?