on a real-time basis, excess number of deaths related to influenza and other possible public health threats across participating European Countries. 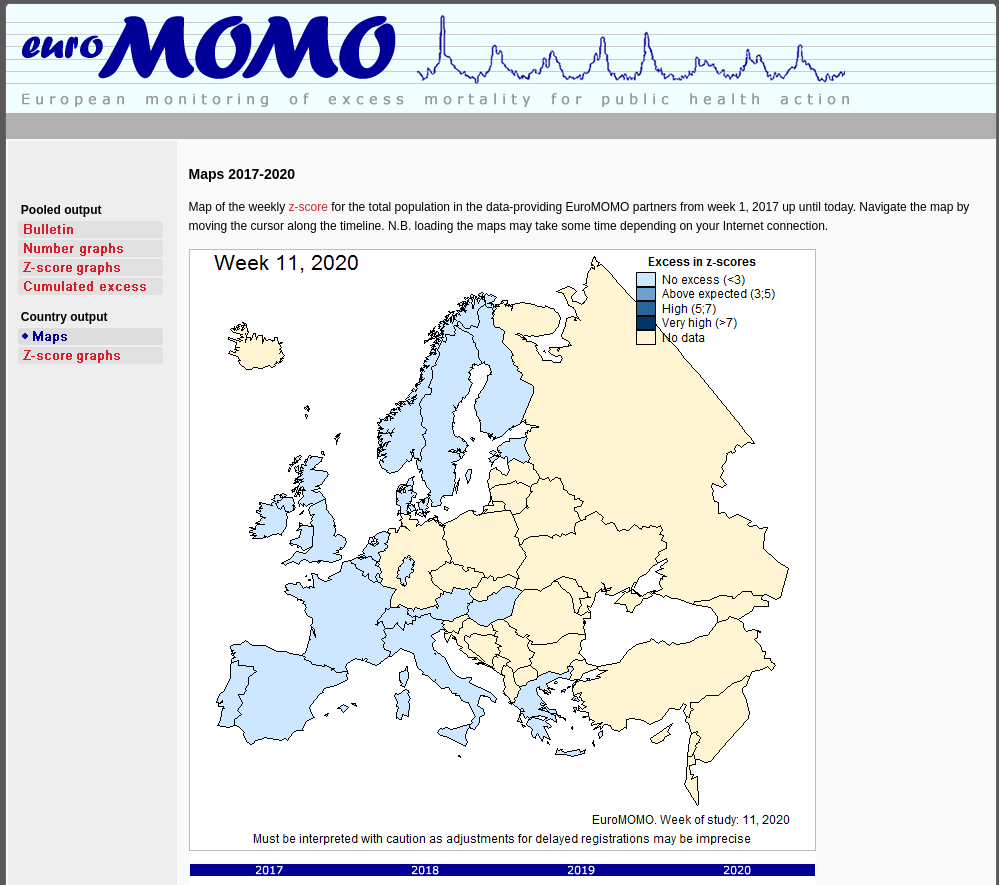 However, there is no shortage of media reports describing a drastic increases in deaths due to COVID-19:

Why does this map not match the newspaper reports?

The Economist now has an (April 3) article on this, discussing the death stats from Bergamo specifically.

Official death tolls for covid-19 may exclude people who died before they could be tested. They also ignore people who succumbed to other causes, perhaps because hospitals had no room to treat them. The latter group has been large in other disasters. For example, when Hurricane Maria struck Puerto Rico in 2017, America recorded only 64 deaths. A study later found that the surge in total deaths was close to 3,000. Many occurred in hospitals that lost power.

Such analysis is not yet possible for nations battling covid-19. The only European country whose total death rate (as calculated by Euromomo, a research group) had spiked by March 20th was Italy. This estimate is based on a group of cities. Unfortunately, Italy does not break down covid-19 deaths by city, precluding a comparison of covid-19 and total deaths in the same area.

However, journalists and scholars have crunched their own numbers. L’Eco di Bergamo, a newspaper, has obtained data from 82 localities in Italy’s Bergamo province. In March these places had 2,420 more deaths than in March 2019. Just 1,140, less than half of the increase, were attributed to covid-19. “The data is the tip of the iceberg,” Giorgio Gori, the mayor of Bergamo’s capital, told L’Eco. “Too many victims are not included in the reports because they die at home.”

(As a side note: until April 3, French reports didn't even include deaths in nursing homes.)

And for the broader context:

Comparable figures can be found across Europe. In Spain El País, a newspaper, has published the results of a study by the government’s health research centre, showing that “excess” deaths in the Castile-La Mancha region were double the number attributed to covid-19. Jean-Marc Manach, a French reporter, has found a similar disparity in the department of Haut-Rhin. 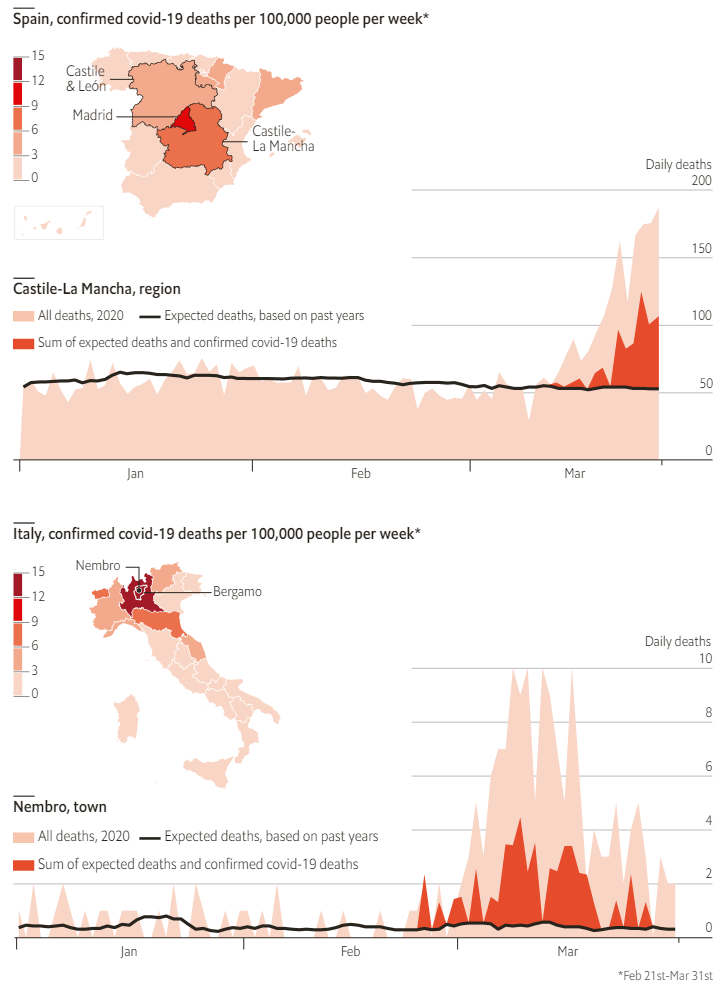 So yes, using more accurate local statistics, the extra deaths do "pop up" in graphs, even for the present level of uncertainty. 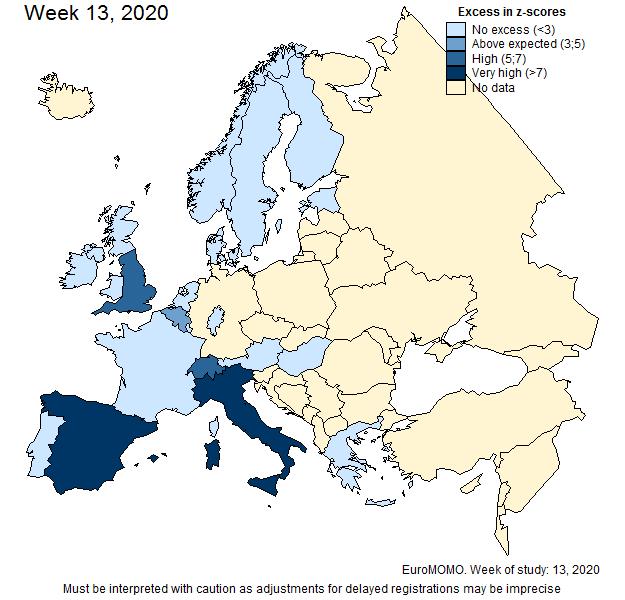 The fact that Italy and Spain are in "the top" z-scores should be self-explanatory by now.

Since there's a misleading chart (for all countries) posted in another answer below, here some updates on the total excess figures in EuroMOMO (not by country), compared to previous years/seaons: 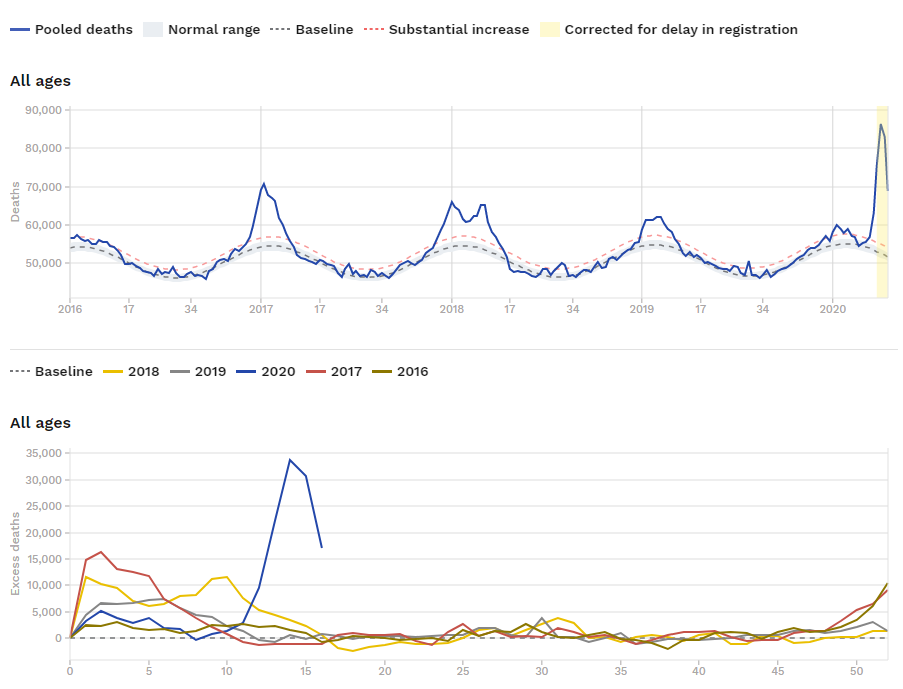 The downward (post-peak) slope in the last chart for 2020 should be interpreted with caution, for there are extra delays in reports nowadays. Interestingly, on cumulated excess deaths, the data insofar for 2020 is enough to put 2020 above the prior years back to 2016:

The answer to this question is simply "the presented data was not yet up-to-date".

Compare the colour of Italy in the screenshot from the question for Week 11, 2020:

With a screenshot taken slightly over two weeks later of the exact same Week 11. 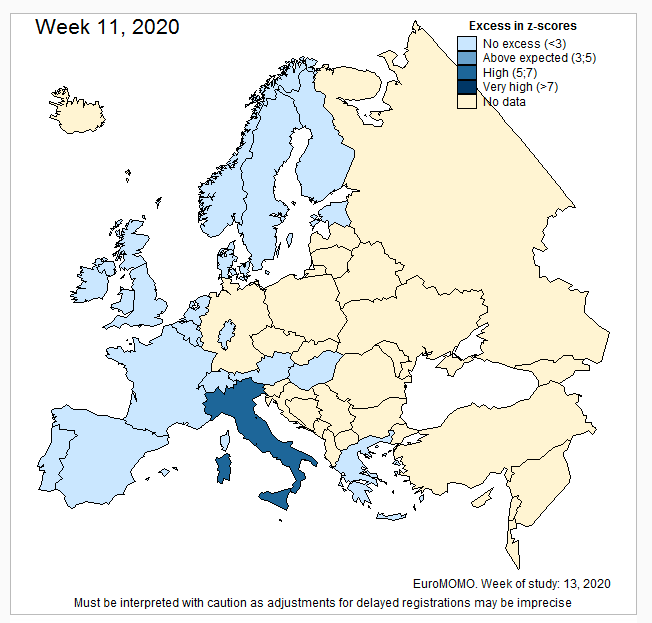 This change is entirely consistent with the warning at the base of the map about interpretation.

The Euromomo home page contains a a statement:

Over the past few days, the EuroMOMO hub has received many questions about the weekly all-cause mortality data and the possible contribution of any COVID-19 related mortality. Some wonder why no increased mortality is observed in the reported mortality figures for the COVID-19 affected countries.

The answer is that increased mortality that may occur primarily at subnational level or within smaller focal areas, and/or concentrated within smaller age groups, may not be detected at the overall national level. This even more so in the pooled European-wide analysis, given the large total population denominator. Furthermore, there is always a few weeks of delay in death registration and reporting. Hence, the EuroMOMO mortality figures for the most recent weeks must be interpreted with some caution.

TL;DR
A lot of people died in a small area (city of Bergamo) but in the large numbers of the whole country (Italy) there is no unusual excess mortality.

Yes, there is "excess mortality" in Italy and other countries in March 2020 in Europe. It is clear from euoromomo site https://www.euromomo.eu/graphs-and-maps/#pooled-by-age-group. Countries like Austria, Denmark, Estonia, Finland, Germany (Berlin and Hesse), Hungary, Irelnad, Luxemburg, Malta, Norway and Portugal do not report abnormal number of deaths until 13 week of 2020. COVID-19 is present everywhere in all countries. Thus controlling factor of excess mortality is unknown and needs additional investigation.

Well, if you take a town like Nembro (in the province - not the city - of Bergamo) that has a population of 11,518 and then use a ratio per 100,000, of course one single death will show up as way out of the baseline roughly 10 times more).

However, if you do analyze excess mortality in absolute numbers (and I believe this is the original question), there are less people dying every week all over Europe than in the similar period of the last 3 years.

From the original Euromomo link, the pooled number of deaths:

Not the answer you're looking for? Browse other questions tagged covid-19 italy .

40
Has the number of pneumonia deaths in the US dramatically dropped in 2020?
47
Is COVID-19 more dangerous than typical annual coronavirus variants?
47
As of May 2020, are there twice as many deaths from Covid-19 in New York City as there are on a usual day from all other causes combined?
-1
Which data are correct for the number of SARS-CoV2 positive tests in France on April 4?

10
Did Germany and France offer help to Italy in the Covid-19 crisis?
10
Are there only 1,200-1,900 confirmed cases of COVID-19 in India and Japan, as of March 30, 2020?
47
As of May 2020, are there twice as many deaths from Covid-19 in New York City as there are on a usual day from all other causes combined?
7
What is the real amount of new Covid-19 cases per week per 100,000 people in Germany?
5
Was COVID-19 in Italy by September 2019?
10
Did the mortality drop after some countries made Ivermectin and Hydroxychloroquine the standard treatments for COVID-19?
12
Have there been no deaths due to omicron in Africa?
6
Did 'border closure' have little to no effect on COVID-19 mortality?
5
Does Vitamin D defiency increase the mortality of a covid infection 12 times?