Can surgical masks be sanitized and safely reused?

I ask about only surgical masks, not respirators. I know that Pres. Trump has no medical degree, but on Mar 21 2020 he proclaimed

"We have very good liquids for doing this, sanitizing the masks, and that that's something they're starting to do more and more. They're sanitizing the masks." Stanford researchers confirm N95 masks can be sterilized and reused with virtually no loss of filtration efficiency by leaving in oven for 30 mins at 70C / 158F : COVID19

On Mar 25 2020, Stanford researchers confirm N95 masks can be sterilized and reused with virtually no loss of filtration efficiency by leaving in oven for 30 mins at 70C / 158F.

On Mar 26 2020, Duke says it has found a way to safely reuse masks worn when treating COVID-19 patients : Coronavirus

Duke Health says it will stretch its supply of specialized masks used by health care workers treating coronavirus patients by decontaminating and reusing them.

Duke will use aerosolized hydrogen peroxide to treat N95 masks at its three hospitals in Durham and Raleigh. The gas permeates the masks to kill germs, including viruses, without harming the material, Duke says.

But in a new post on Thursday, she doubled down on her claim that it is a legitimate way for people to get round the scarcity of masks in the city.

"An expert from the National Health Commission, Li Lanjuan, said the new coronavirus can be killed at 56 degrees, while microbiologist Professor Yuen Kwok-yung also said the virus easily dies at 30 degrees. Therefore, steam-sterilising face masks is not unfeasible."

I can't find official advice on re-using surgical masks, and quote the CDC that warns against attempting to sanitise for re-using respirators (that, I wrote, I wasn't asking about).

Limited re-use of N95 respirators when caring for patients with COVID-19 might become necessary. However, it is unknown what the potential contribution of contact transmission is for SARS-CoV-2, and caution should be used. Re-use should be implemented according to CDC guidance. Re-use has been recommended as an option for conserving respirators during previous respiratory pathogen outbreaks and pandemics. It may also be necessary to re-use N95 respirators when caring for patients with varicella or measles, although contact transmission poses a risk to HCP who implement this practice.

Yet Face Masks for Flu? Don't Reuse Them :

There is no guaranteed safe way to reuse face masks as protection against flu in the event of a pandemic, a government panel's report concluded Thursday.

The conclusion was a mild setback to U.S. efforts to prepare for an influenza caused by the H5N1 bird flu virus or another flu pathogen. Bush administration officials asked for the report to determine whether stockpiles of surgical masks and respirators could be used multiple times to extend their reach during an emergency.

"There is currently no simple, reliable way to decontaminate these devices to enable people to use them more than once," said John C. Bailar, co-chairman of the Institute of Medicine (IOM) panel that issued the report.

This question is probably rather unsuitable for the Skeptics format as it rather a matter of (professional) opinion. Starting with the last quote you gave, which is from a 2006 WebMD article

The way to decrypt that is to read the full quote

"There is currently no simple, reliable way to decontaminate these devices to enable people to use them more than once," said John C. Bailar, co-chairman of the Institute of Medicine (IOM) panel that issued the report.

It depends what one means by "simple [and] reliable". It certainly not as simple and reliable as decontaminating (stainless steel) surgical instruments, for instance, due to materials used in masks.

As for the more specific ideas from the other quotes, in general use of chemicals has not been terribly favored, e.g. a 2009 paper said in its abstract:

The scent of bleach remained noticeable following overnight drying and low levels of chlorine gas were found to off-gas from bleach-decontaminated FFRs when rehydrated with deionized water. UVGI, ethylene oxide (EtO), and VHP were found to be the most promising decontamination methods; however, concerns remain about the throughput capabilities for EtO and VHP. Further research is needed before any specific decontamination methods can be recommended.

And for example regarding EtO

Residual EtO remaining on FFRs following EtO vapor-phase decontamination is not believed to be a concern because the sterilization process includes a final aeration cycle of 4 h to remove residual EtO gas.

So, is EtO "simple and reliable"?! YMMV. Likewise, heat treatment can be more damaging to some masks models than to others, e.g.

The degree to which temperature affects initial filter aerosol penetration and component melting was observed to be model specific (Figs 1 and ​and 2). 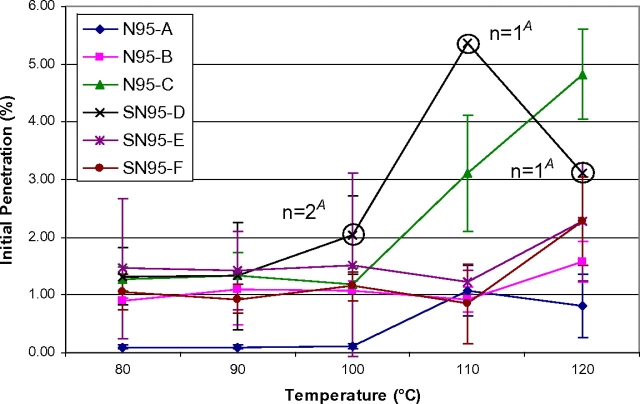 Fig. 1. N95 FFR average initial sodium chloride filter aerosol penetration versus temperature. Each data point represents the average initial penetration of three samples (n = 3), unless otherwise noted. ‘A’ indicates five SN95-D FFRs melted, one at 100°C, two at 110°C, and two at 120°C and could not be penetration or airflow resistance tested.

This study examined the effectiveness of three energetic decontamination methods [ultraviolet germicidal irradiation (UVGI), microwave-generated steam, and moist heat] on two National Institute for Occupational Safety and Health-certified N95 FFRs [...] contaminated with H5N1. [...] when properly implemented, these methods effectively decontaminate H5N1 on the two FFR models tested and do not drastically affect their filtering function; however, other considerations may influence decisions to reuse FFRs.

Yet another 2010 study actually tried to do this decontamination process more than once (3 times to be more precise):

Decontamination and reuse of FFRs is a possible strategy for extending FFR supplies in an emergency; however, the NIOSH respirator certification process does not currently include provisions for decontamination and reuse. Recent studies have investigated the laboratory performance (filter aerosol penetration and filter airflow resistance) and physical integrity of FFRs following one-cycle (1X) processing of various decontamination treatments. The studies found that a single application of some methods did not adversely affect laboratory performance. In the event that healthcare facilities experience dramatic shortages of FFR supplies, multiple decontamination processing may become necessary. This study investigates three-cycle (3X) processing of eight different methods: ultraviolet germicidal irradiation, ethylene oxide, hydrogen peroxide gas plasma, hydrogen peroxide vapor, microwave-oven-generated steam, bleach, liquid hydrogen peroxide, and moist heat incubation (pasteurization). A four-hour 3X submersion of FFR in deionized water was performed for comparison (control). Following 3X treatment by each decontamination and control method, FFRs were evaluated for changes in physical appearance, odor, and laboratory filtration performance. Only the hydrogen peroxide gas plasma treatment resulted in mean penetration levels > 5% for four of the six FFR models; FFRs treated by the seven other methods and the control samples had expected levels of filter aerosol penetration (< 5%) and filter airflow resistance. Physical damage varied by treatment method. Further research is still needed before any specific decontamination methods can be recommended.

As there is probably no reasonable way to meta-analyze these studies, I suspect it comes down to a reviewer's opinion what to infer from them in terms of generalizability.

And to quote the recent NYT article on this, what explains this state of affairs is that:

But the studies were small, and scientific interest in decontamination has been sporadic and fleeting.

“People get interested around the time of a SARS epidemic or an H1N1 flu epidemic, and then they forget,” said Dr. Lynn Goldman, dean of George Washington University’s Milken Institute School of Public Health.

“If you are talking about cures, you can get very large grants” to study decontamination, Dr. Goldman added. “But if you are doing studies on prevention and protection, it’s very hard. It’s not clear whose job in the federal government it is to fund it.”

16
Is there any real benefit in the everyday use of surgical masks to protect oneself from radiation?
14
Do essential oils safely and effectively treat constipation, stomach aches and fevers?
9
Is bamboo charcoal safely edible?
3
Can reflexology diagnose and cure disease?
6
Is a face shield as effective as a face mask?
14
Are there medical reasons for not being able to wear a surgical mask?