A DW article states that

Air humidity also influences the transmissibility of respiratory viruses. Once the pathogens have been expelled from the respiratory tract with a strong sneeze, they literally hang in the air. "On cold and usually dry winter days, the small droplets, together with the viruses, float in the air longer than when the air humidity is high," Pietschmann elaborates.

Are there controlled experimental studies that back up this theory, i.e. when holding other potential confounders constant, temperature in particular?

A reason to be a bit skeptical is that drying generally destroys viruses and wet conditions do the opposite e.g.

Survival of an LPAI H5N2 virus experimentally introduced into egg yolk and albumen and onto egg shells has been measured at storage temperatures of 4–20ºC. Survival was inversely related to temperature and yolk was the best medium for survival with virus detectable in yolk at all temperatures for up to 17 days. After 3–4 hours of drying on the egg shell surface, this virus was not detectable at any temperature.

So, it seems to me that if dry air does indeed promote the spread of a (respiratory) virus better than wet air, ceteris paribus, by the mechanism posited in the first quote, it would offer a relatively narrow "window of opportunity" before the virus dries out faster in the drier air.

Another reason to be skeptical of the claim in first quote are some epidemiological studies, e.g.:

If peak influenza activity is an accurate measure, flu viruses prefer the weather either cold and dry or humid and rainy, according to an analysis of climate variables and flu patterns around the world. [...]

in temperate regions, flu was more common 1 month after periods of the lowest specific humidity, which coincided with the coldest months.

In contrast, sites that maintained high levels of specific humidity and temperature were generally characterized by influenza epidemics during the most humid and rainy months of the year.

So it seems to me that quantifying the effect posited in the first quote is quite necessary, i.e. at constant temperature it might actually be the opposite of what is claimed there.

This is a rather tentative answer since the evidence still looks fairly contradictory to me, but the BBC has an article that reiterates what DW says, with more detail:

Thanks to the laws of thermodynamics, cold air can carry less water vapour before it reaches the “dew point” and falls as rain. So while the weather outside may seem wetter, the air itself is drier as it loses the moisture. And a steady stream of research over the past few years has shown that these dry conditions seem to offer the perfect environment for the flu virus to flourish.

And with more details in the why part

Any time we splutter with a cold, we expel a mist of particles from our nose and mouths. In moist air, these particles may remain relatively large, and drop to the floor. But in dry air, they break up into smaller pieces – eventually becoming so small that they can stay aloft for hours or days. (It’s a bit like the mist you get when you turn a hose pipe to its finest spray.) The result is that in winter, you are breathing a cocktail of dead cells, mucus and viruses from anyone and everyone who has visited the room recently.

But insofar, it's still "just theory". The supporting experiments mentioned by the BBC:

Lab experiments, for instance, have looked at the way flu spreads among groups of guinea pigs. In moister air, the epidemic struggles to build momentum, whereas in drier conditions it spreads like wildfire.

This is practically an experimental contradiction of the epidemiological study from my question! And then come the qualifications:

There are some exceptions to the general rule. Although the air on aeroplanes is generally dry, it does not seem to increase the risk of catching influenza – perhaps because the air conditioning itself filters out any germs before they have a chance to circulate. And although the dry air seems to fuel the spread of flu in the temperate regions of Europe and North America, some contradictory results suggest the germs may act somewhat differently in more tropical areas.

One explanation is that in particularly warm and wet conditions of a tropical climate, the virus may end up sticking to more surfaces within a room. So although it can’t survive in the air so well, the flu virus could instead be thriving on everything that you touch, making it more likely to pass from hand to mouth.

The BBC also has some more "huh" material:

What’s more, water vapour in the air seems to be toxic to the virus itself. Perhaps by changing the acidity or salt concentration in the packet of mucus, moist air may deform the virus’s surface, meaning that it loses the weaponry that normally allows us to attack our cells. In contrast, viruses in drier air can float around and stay active for hours – until it is inhaled or ingested, and can lodge in the cells in your throat.

(So why is it that that "water vapour toxicity for viruses" does not manifest itself on wet surfaces??)

I'll have to dig up more actual research for a better/real answer, but it seemed a good idea to post this "it depends" answer for now. (I'll accept a better one.)

The BBC does not clearly cite the guinea pigs study they mention, but I suspect it's this 2007 one, by Lowen et al., since it has over 1000 citations

One of the (also pretty cited) papers citing Lowen has this to say:

Person-to-person transmission is central to seasonal and pandemic spread; nevertheless, the modes of spread are a matter of ongoing debate. Resolution of this discussion is paramount to the development of effective control measures in health care and community settings. Using the guinea pig model, we demonstrated that transmission of influenza A/Panama/2007/1999 (H3N2) virus through the air is efficient, compared with spread through contaminated environmental surfaces (fomites). We also examined the aerosol transmission efficiencies of 2 human influenza virus A strains and found that A/Panama/2007/1999 influenza virus transmitted more efficiently than A/Texas/36/1991 (H1N1) virus in our model. The data provide new and much-needed insights into the modes of influenza virus spread and strain-specific differences in the efficiency of transmission.

[...] We have previously established that transmission of human Pan99 is highly efficient by direct contact and at short range through the air in the guinea pig model, despite the absence of expulsion events, such as coughing or sneezing [16–18].

So it appears the guinea pig flu in general transmits poorly on surfaces (fomites), but that might not be the case for all "flus".

That impression appears to be correct based on a 2014 review:

It also discusses the complex dynamics of RSV survival in droplets:

One study examined the effect of humidity on RSV survival in 1 μl droplets of tissue culture medium on polythene at room temperature. Over the first 5 h, RSV survival was highest at the highest humidity, while over the next 67 h, RSV survival was highest at the lowest humidity. The explanation of these findings may lie in the droplet drying time in this study. Droplets exposed to 77% RH were still wet at 18 h (no data were given for drying times at 32% or 52% RH). The relatively high survival at higher humidity over the first 5 h was probably due to the fact that the droplets remained wet in these conditions. The survival over the final 48 h (when all droplets were dry) was progressively reduced with increasing humidity. Consistent with this explanation, only 1% of RSV was lost over the 72 h when stored in liquid culture medium, and in addition, the authors noted that RSV survival was increased with increased droplet size. Similarly, in another study the survival of RSV on countertops was reduced if the virus was in droplets that were dried quickly. These results are consistent with the studies examining influenza survival on surfaces, suggesting that while the virus remains ‘wet’ in droplets, high humidity prolongs its survival, by reducing evaporation.

Regarding influenza, these graphs from the review should be self-explanatory: 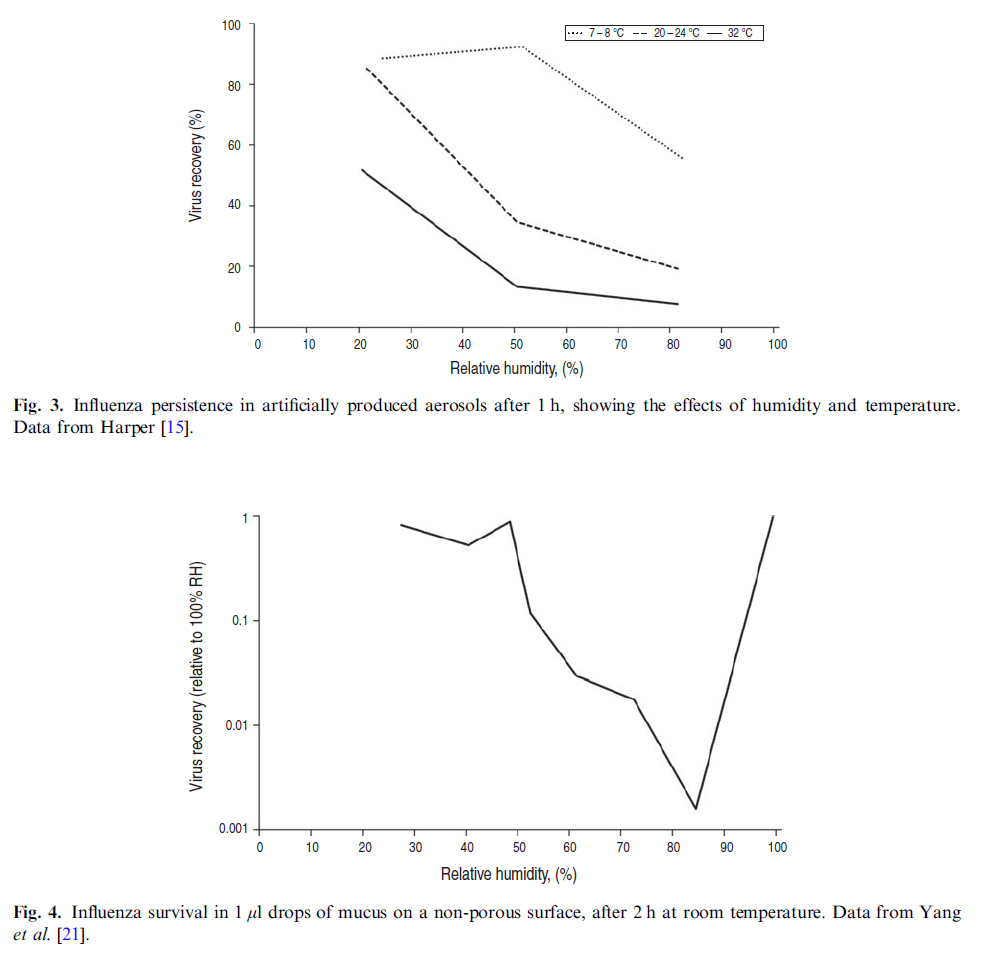 As the (2012) paper from which the 2nd (V-shaped) graph originates explains:

Also quite interesting (but predictable at this point) observation from a different 2015 review:

There had not been any studies of the effect of AH [absolute humidity] on influenza virus transmission (IVT) until Shaman and Kohn used the data published by Lowen et al. to recalculate AH from the RH and temperature values and model its effect on IVT and influenza virus survival (IVS). Based on the observation that there a strong seasonal cycle in AH, both outdoor and indoor, with lowest values during the colder winter months in temperate regions, they hypothesised that AH was more likely to affect viral survival and transmission than RH which is often high in the winter. Using linear regression to plot temperature, RH and AH against IVT they demonstrated that AH had a highly significant inverse relationship (p < 0.00027) with viral transmission; i.e. the lower the AH, the more viral transmission occurred. The statistical significance of this was much greater than for RH and IVT as well as temperature and IVT.

(I'll try to clean up this answer a bit later on.)

11
Link between runny noses and rhinoviral infections
7
Does raising your arm in the air help when you are coughing/choking on something?
5
Do UV air purifiers reduce the risk of being infected by the common cold or the flu?
5
Were summer colds up in 2021?