Does Burzynski have a miracle cancer cure being suppressed by the FDA?

I received this Mercola announcement for the movie, Burzynski about Stanislaw Burzynski's (allegedly) amazing cure for cancer, which uses antineoplastons.

The Mercola article claims some fairly hefty things, such as:

Burzynski, the Movie is the story of a medical doctor and Ph.D biochemist named Dr. Stanislaw Burzynski who won the largest, and possibly the most convoluted and intriguing legal battle against the Food and Drug Administration in American history.

You will learn that not only did the US Federal government spend 14 years actively suppressing a cancer treatment that had a FAR greater success rate than any other treatment available, they also spent well over $60 million of US taxpayer dollars trying to put the inventor of the treatment in jail in order to steal his patents and either suppress or cash in on his discovery.

Burzynski had appealed the limitations on his advertising [due to a cease and desist order from the FDA] on the grounds of free speech, but the appeal court upheld the decision, stating that "Burzynski's commercial speech does not concern a lawful activity."

...The 2010 film Burzynski directed by Eric Merola, documents Burzynski's efforts to gain FDA approval for the therapy. [emphasis mine]

My resultant questions are:

I suspect that the new, shiny developments in this industry that one doesn't hear about until Mercola advertises it were probably never much to begin with. Also, they unsurprisingly tend to involve aspects of a "big government conspiracy," and the bundled accusation that the only thing the US government cares about is keeping its citizens diseased and broke.

Nevertheless, I'm still interested in facts others can find, as well as making this a reference for other googlers. I will say that he has quite the list of publications, but it's difficult to find reviews of Burzynski's work that aren't published by him.

My government firewall strips all formatting, so I can't do what is required to make this answer look pretty, but the basic gist is (again, suggest you go to the Cancer.gov site for the links, and emphasis mine):

Antineoplastons are chemical compounds that are found normally in urine and blood. For use in medical research, antineoplastons can be made from chemicals in a laboratory. (See Question 1.)

Antineoplaston therapy was developed by Dr. S. R. Burzynski, who proposed the use of antineoplastons as a possible cancer treatment in 1976. (See Question 2.)

No randomized, controlled trials showing the effectiveness of antineoplastons have been published in peer-reviewed scientific journals. (See Question 6.)

Nonrandomized clinical trials are ongoing at Dr. Burzynski’s clinic to study the effect of antineoplastons on cancer. (See Question 6.)

Antineoplastons are not approved by the U. S. Food and Drug Administration for the prevention or treatment of any disease. (See Question 8.)

EDIT TO ADD: You have to ask, if this is a cure, and the FDA is supressing it, why isn't it being used in areas that the FDA has no authority? Things that make you go "Hmm?"

Edit from Asker: This was a great answer! I'm simply adding links to two more resources I found on my own to add to it for anyone else who stumbles across this (hope the answerer does not mind!).

In 1998, Paul Goldberg, editor of The Cancer Letter, a D.C.-based newsletter covering cancer research and drug approval, investigated Burzynski's claims up to that point. He asked three renowned and independent researchers to examine Burzynski's scientific protocols — all three said they could not make sense of the data, saying it did not resemble any commonly accepted models. Ten years later, Goldberg and two of those doctors don't feel any differently.

Henry Friedman, a neuro-oncologist at the Duke University Medical Center, was one of the independent doctors who reviewed the data for Goldberg. [He said,] "Despite thousands of patients treated with the antineoplastons, no one has yet shown in a convincing fashion, [through] the rigorous requirements for peer review, that the therapy works"...

I concur with the answer from Brightblades, which addresses the lack of clinical evidence.

That leaves the question about the legal situation.

From the Wikipedia page references, I found a decision for case NO. 03-95-00222-CV at the Texas Court of Appeals, in the case between Burzynski and the Texas State Board of Medical Examiners.

Appellant Texas State Board of Medical Examiners ("the Board") ordered that appellee Dr. Stanislaw Burzynski's license to practice medicine be suspended and that such suspension be stayed with Dr. Burzynski being placed on probation for ten years under certain conditions. (1) Upon judicial review of the Board's order, the district court reversed the order in its entirety and dismissed the cause. In two points of error, the Board asserts that the trial court erred in finding that TMPA section 5.09(a) authorizes Dr. Burzynski's use of antineoplastons in Texas and that the false advertising statute is unconstitutional. We will reverse the judgment of the trial court and render judgment in accordance with the order of the Board.

To summarise the summary:

This confusing back-and-forth explains why the difference sources appear to be contradicting each other.

I was about to make a post on the same subject and found plenty of information here, so decided to append to the archive ... here are some clinical trial data on his work ...

If you exclude the enormous amount of studies with an unknown status, you ignore the withdrawn and terminated studies, there's only one completed study; which doesn't actually have a completion date listed, nothing published and the only investigators are listed as Stanislaw R. Burzynski, MD, PhD and Burzynski Research Institute . 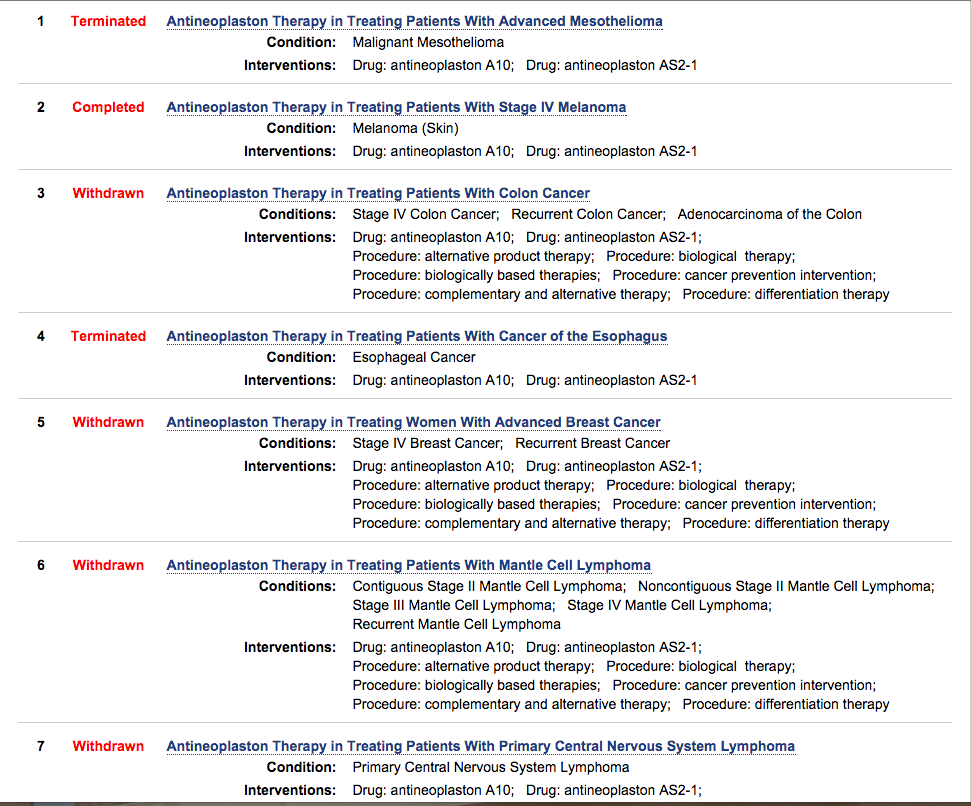 Not the answer you're looking for? Browse other questions tagged medical-science alternative-medicine cancer fda .

29
Are cancer recovery rates the same as they were in 1920?
19
Does soursop cure cancer?
17
Did Richard Nixon commission a study on the effects of THC and then have the results classified?
1
Does beetroot cure cancer?
107
Has the cure to cancer been hidden by pharmaceutical companies?
27
Does Frankincense cure cancer?
4
Does carrot juice cure cancer?