Today, a friend sent me a link to the cheery song "Lied vom Volkspolizist" by Blascore on the compilation "Rote Lieder (Die Besten politischen Lieder aus der DDR)", but listening to the song lyrics ("Wir helfen den Menschen, ich bin mit dabei, ich schütze die Kinder als Volkspolizei") and the wacky sounds, it is hard to tell if it is a parody or not. Indeed, googling the song name or the band Blascore indicates that the song was not released until 1999 or possibly 2008.

So my question is, are the songs on this compilation really from the GDR era? Some are obviously so, such as the national anthem, but some cause me to have doubt.

The one example you picked out here — "the people's policeman song" — is a GDR composition, obviously in this cover version format recorded by another band much later.

But it is wacky music in the original. The original is a children's song meant to guide good socialists into becoming good citizens, also played on TV when it was time for decent pre-schoolers to go to bed. Or taught in kindergartens.

This is a video of the original music: Der Volkspolizist, der es gut mit dir meint…
(Context: the linked video here matches the stop-motion animation style of the show "Unser Sandmännchen", and it is a genuine pre-1990 GDR-times/version/video. But it is a so-called (NSFW) underground porn parody, unearthed and widely publicised by the Franco-allemande TV station arte and shown in the documentary "Satirischer Knetgummi-Animationsfilm von Micha S." in: "Von Blümchensex und Knetfiguren – Pornografie Made in DDR" (src, full documentary on Youtube (starting at 33:00).). The possible 'original' for this is like other open socialist propaganda pieces — like our little sandman with the people's army 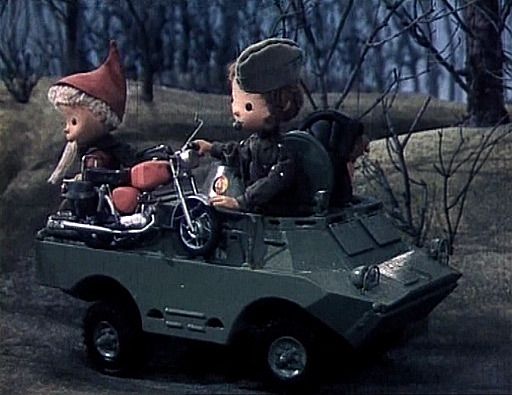 Lyrics for 'the helping friend of kids' that was the people's policeman here.

I'm standing at the sidewalk, traffic's rushing, I'm scared to cross, I'm scared to go near! The People's Policeman who's kind to us, He's taking me across, he is our friend!

The cars are honking, the train is ringing! Don't jump on the car, don't hang on to it! The People's Policeman, who means well, He shows us the way, for he's our friend!

I'm lost, the city is so big, Mommy will be waiting. How will I find her? The people's policeman who's good to us, He will take me home. He is our friend!

And when I grow up, just so you know, Then I'll be one of those people's policemen. We help the people, I'm in on it, Protect the children as the People's Police!

Not the answer you're looking for? Browse other questions tagged germany music .