Were international travellers kept waiting in densely packed queues at US airports due to COVID-19 screenings?

There are several claims online that international travelers returning from Europe were kept waiting in densely packed queues at JKF and O'Hare airports, due to COVID-19 screenings, on the weekend of March 14 2020.

JFK airport in New York City has turned into a #CoronaVirus breeding ground along side O'Hare in Chicago. Crowds waiting in a very long lines in close quarters with thousands of people to clear US Customs' useless enhanced #COVID19 screening measures. 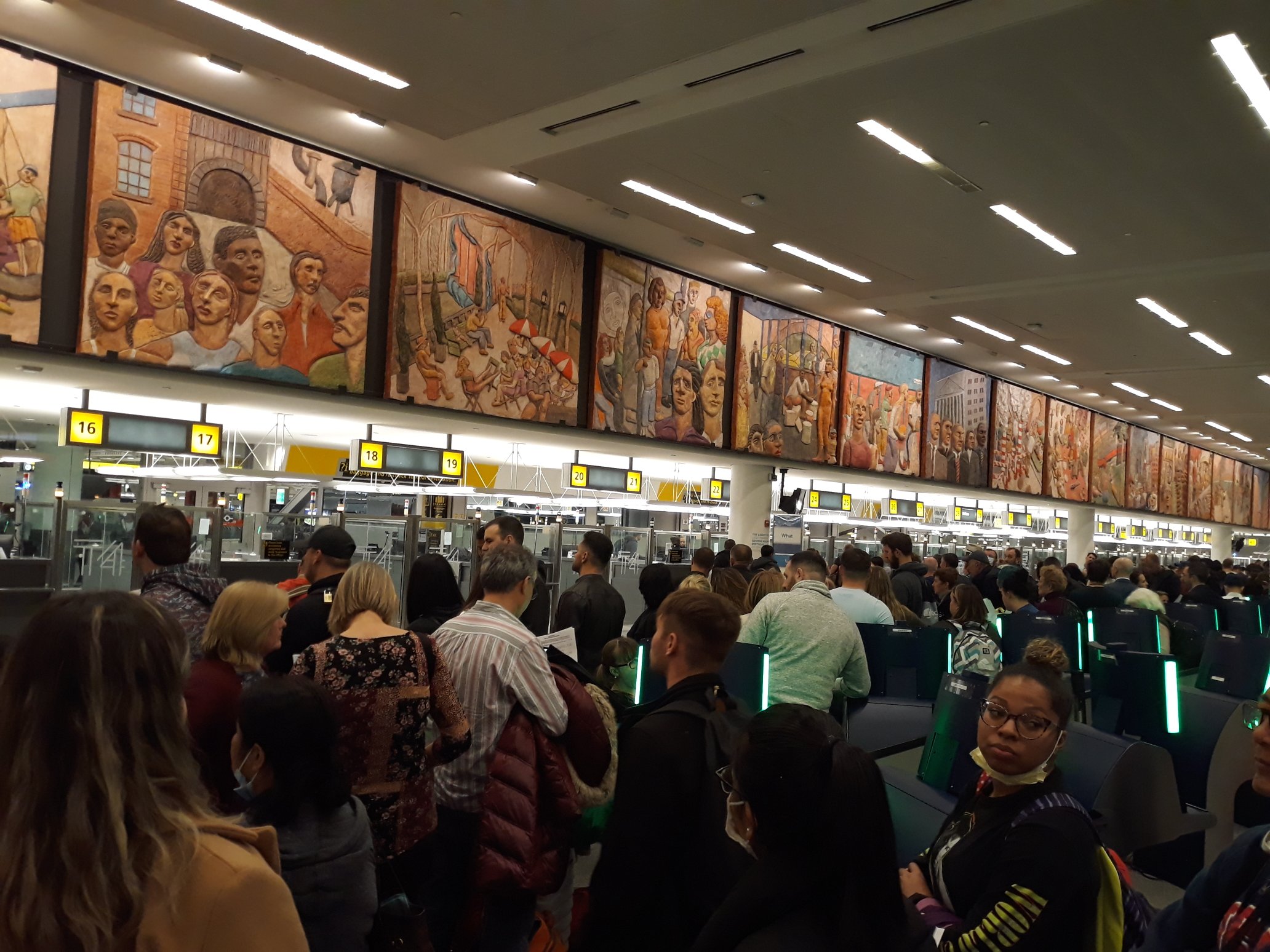 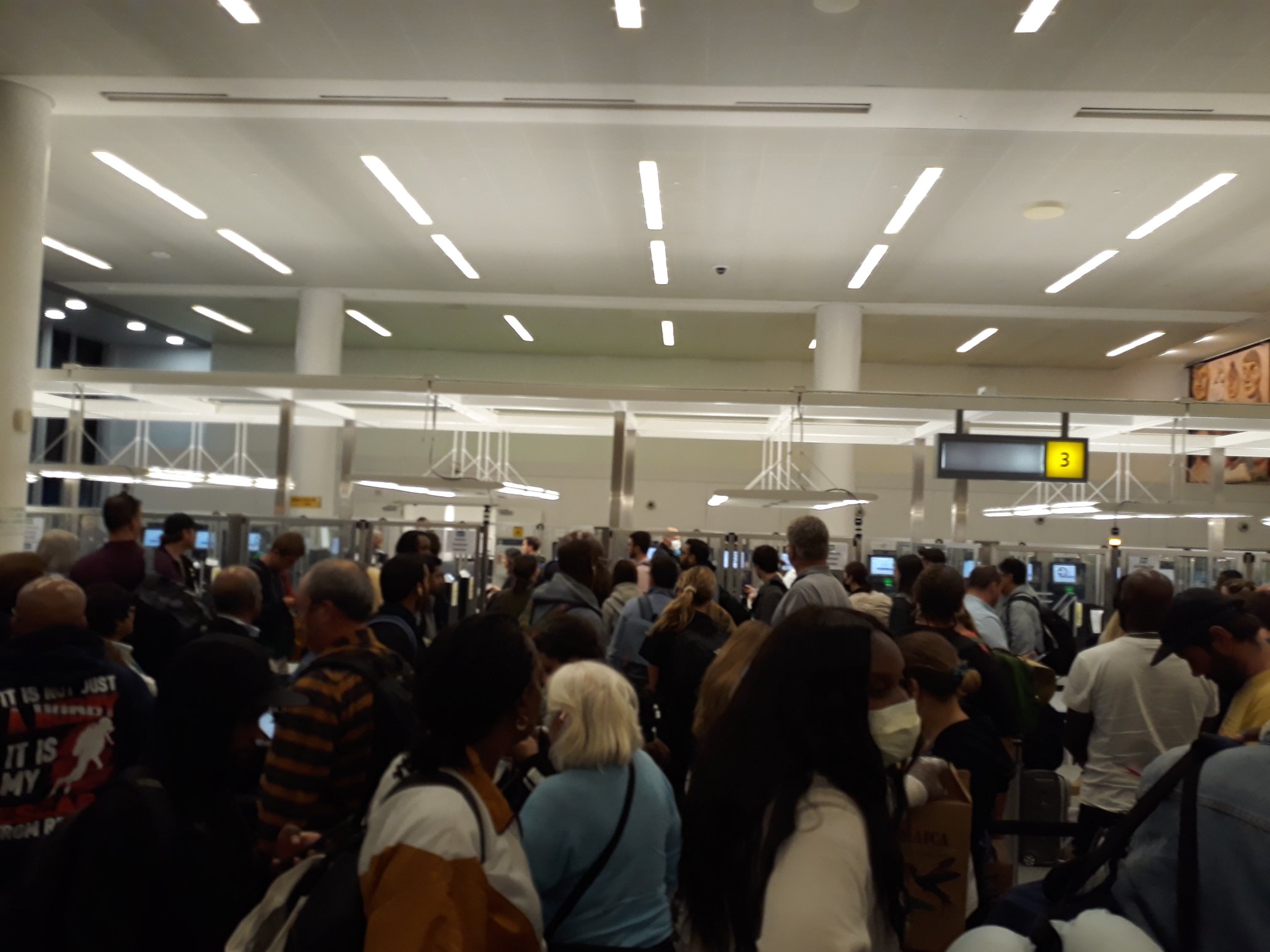 Thousands of people are waiting for hours due to “enhanced screening" procedures.

Since it is pretty easy to fake such a claim by taking pictures from a different timeframe, different place, or different context (e.g. these travellers might all be from Australia), I'd like to know specifically if it's true that people

tl;dr: I have found plenty of references to unusually long lines, and a complete absence of "social distancing" in these lines. O'Hare Intl. Airport's Twitter account and The Washington Post explicitly claim that the medical screening is to blame for the wait times, while others imply it. Until there's a retraction or update to those stories, that makes the claim likely to be true.

CNN about airports in Dallas, Chicago and New York:

As Americans are being urged to keep their distance from one another, travelers returning on flights from Europe say they are being made to wait for hours in close quarters at US airports to get screened for coronavirus. When they arrived at airports in Dallas, Chicago and New York, they faced long lines and confusion, several travelers told CNN. [...]

Karen Rogers, a passenger returning from Paris by way of London, had been waiting in line for at least five hours to be screened at Chicago's O'Hare International Airport and was told she would have at least another hour to go, she said Saturday night. [...]

Passengers first wait in line to have their passports checked and to turn in a declaration form and medical forms for those returning from Europe, South Korea, Iran and China, Schmidt said. Then they are taken to a separate line to undergo a screening and temperature check. [...] - CNN March 15 2020

Scores of anxious passengers said they encountered jam-packed terminals, long lines and hours of delays as they waited to be questioned by health authorities at some of the busiest travel hubs in the United States.

The administration announced the “enhanced entry screenings” Friday as part of a suite of travel restrictions and other strategies aimed at slowing the spread of the coronavirus. Passengers on flights from more than two dozen countries in Europe are being routed through 13 U.S. airports, where workers are checking their medical histories, examining them for symptoms and instructing them to self-quarantine.

But shortly after taking effect, the measures designed to prevent new infections in the United States created the exact conditions that facilitate the spread of the highly contagious virus, with throngs of people standing shoulder to shoulder in bottlenecks. - Washington Post March 15 2020

As weary travelers returned to the U.S. amid coronavirus-related travel restrictions, they were greeted with packed, hourslong waits for required medical screenings at airports.

Americans returning from Europe found themselves in a crowded hell of delays and long lines Saturday night at the 13 airports selected to handle their incoming flights under new rules enacted by the Trump administration to combat the spread of the coronavirus. - New York Post March 15 2020

Chicago’s O’Hare International Airport was among those overwhelmed Saturday with passengers, including many returning from Europe, who faced new screening measures hastily announced earlier last week.

The crowds of anxious travelers were a stark contrast to the increasingly loud calls for people to practice “social distancing” as a way to get ahead of the spread of the coronavirus and buy fragile health care systems time. - Bloomberg March 15 2020

Not the answer you're looking for? Browse other questions tagged united-states public-health covid-19 airport-security .

24
Was a male birth control trial cancelled due to symptoms that were no worse than female birth control?
5
Were the vast majority of lost manufacturing jobs since 2000 lost due to automation?
13
Was a “large number” of new COVID-19 clusters in the United States seeded by travellers from Europe?
64
Were COVID-19 patients in Wuhan welded into their apartments to enforce the lockdown?
12
Was there “excess mortality” in Italy due to COVID-19 in March 2020?
4
Do young people with no previous pathologies, end up admitted with bilateral pneumonia and serious breathing difficulties due Covid-19?
4
Were hospitals in California half empty in April 2020 during the covid-19 pandemic?
16
Were 70 COVID-19 testing sites destroyed during the George Floyd protests?