Is “flatten the curve” plot from Economist informative [closed]

This picture from this article quickly became very popular. Keep in mind that I'm not arguing with the obvious idea that some serious measures should be taken to mitigate the effects of the pandemic. Not even I'm arguing that exactly measures mentioned in the article should be taken.

I still don't get the plot however. Say, the data on the plot is about total number of infected - so after the maximum there're no new cases. Say, in N days we know for sure either infected person will die or will get cured. That will mean that in N days the plot will asymptotically come to zero. It's not obvious (to me) from the plot why in that case second scenario will take longer.

So, it's obvious that I'm misinterpreting this plot being not able to choose one of two interpretations and not seeing a valid third alternative. Hence the question.

This graph was initially used in the 2007 CDC report, "Interim Pre-Pandemic Planning Guidance: Community Strategy for Pandemic Influenza Mitigation in the United States". Ctrl+F for "Figure 1".

Here is their explanation for what the graph means:

The three major goals of mitigating a community-wide epidemic through NPIs are 1) delay the exponential increase in incident cases and shift the epidemic curve to the right in order to “buy time” for production and distribution of a well-matched pandemic strain vaccine, 2) decrease the epidemic peak, and 3) reduce the total number of incident cases and, thus, reduce morbidity and mortality in the community

Interestingly, there is an actual scientifically measured outbreak that closely resembles this graph, which is also being heavily linked online. It is a comparison of the Philadelphia and St. Louis response to the 1918 "Spanish" flu outbreak. 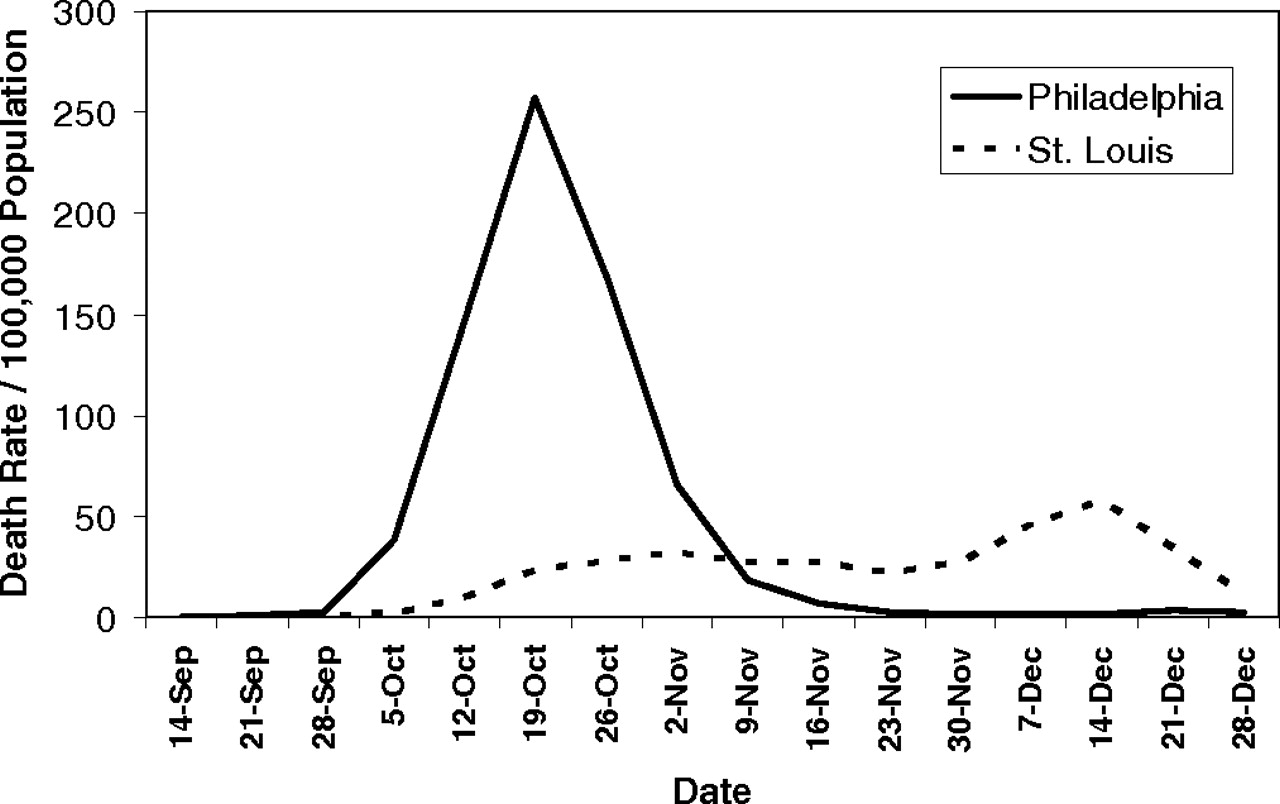 From the source article:

The first cases of disease among civilians in Philadelphia were reported on September 17, 1918, but authorities downplayed their significance and allowed large public gatherings, notably a city-wide parade on September 28, 1918 [sadly, a parade for returning WW1 veterans! --me], to continue. School closures, bans on public gatherings, and other social distancing interventions were not implemented until October 3, when disease spread had already begun to overwhelm local medical and public health resources. In contrast, the first cases of disease among civilians in St. Louis were reported on October 5, and authorities moved rapidly to introduce a broad series of measures designed to promote social distancing, implementing these on October 7. The difference in response times between the two cities (≈14 days, when measured from the first reported cases) represents approximately three to five doubling times for an influenza epidemic.

Note that this second graph measures deaths versus the illnesses in the first graph.

Not the answer you're looking for? Browse other questions tagged covid-19 .

19
Did SARS-CoV-2 originate from ‘People letting animal blood drip on their food’?
10
Did the US confiscate 200,000 masks from a delivery to Berlin?
8
Did the CDC aggregate Covid-19 test data from PCR diagnostic tests with antibody tests?
50
Is the current weekly mortality rate in the US the lowest in a decade and the second lowest in the 21st century so far?
6
What is the real amount of new Covid-19 cases per week per 100,000 people in Germany?
7
Did Spain have 433.13K deaths in 2020 and 428.44K in 2019?
43
Have more deaths occurred after Covid-19 vaccines than from vaccine injuries in the previous 15 years in total?
20
Does this study from 2012 speak to the potential long term effects of the mRNA COVID-19 vaccines?