Was a "large number" of new COVID-19 clusters in the United States seeded by travellers from Europe?

The President justified the ban by saying the EU had failed to take the same precautions as the U.S. in banning travel from China in order to stop the spread of the virus. “As a result, a large number of new clusters in the United States were seeded by travellers from Europe,” he said Wednesday.

How much data backs up this assessment?

There's minimal (ie, no) data to back that up that assertion.

Here's the timeline of first detection after China:

and after that it really started breaking out.

Further, the lack of testing in the US makes it impossible at the moment to determine how far it might have spread and be spreading internally. Based on evidence from Canada where new cases have been traced back the United States, it's just as possible that the US introduced the virus to European countries as is the reverse.

No. The tracking of virus mutations shows that this is not true. The replication of the virus is not perfect and causes minor mutations. These mutations can be observed and give evidence about the origin of the virus. This is shown in the a graphical representation in the attached link.

Interestingly, a recent paper draft from the Icahn School of Medicine at Mount Sinai supports Trump's claim as far NYC is concerned. It could have been a matter of luck as to which strain actually spread (the most) in NYC, but there were apparently a more introduction events from Europe, so basically more "coin flips" in that basket until one turned lucky.

The first isolate had documented exposure through travel to the Middle East (clade A3) and the second through travel to Europe (clade B). Neither of these showed evidence of onward transmission, so we therefore excluded these two cases from any inference made from the phylogenetic analyses. For the remaining isolates, the great majority (87%) cluster with clade A2a. This clade is largely composed of isolates obtained from patients with COVID19 in Europe (72%; Figure 2B), suggesting that introductions from Europe account for the majority of cases found in NYC in the first weeks of March 2020.

[...] The earliest sequences at the base of clade A2a include isolates from Italy, Finland, Spain, France, the UK, and other European countries from late February, in addition to a few North American isolates (Canada and US) from the first week of March 2020. [...]

For the rest of the clades (B, B1, and B4), we identified four putative SARS-CoV-2 virus introductions to NYC as early as February 20 (90%CI: January 29 to February 26) (Table 1). Notably, two of these introductions were inferred to be of domestic origin based on their close relationship with US isolates, including those from the main community transmission in Washington state (Clade B1) (Bedford et al. 2020). The introduction of this clade to the East Coast was recently reported (Fauver et al. 2020). Although more than half of the sequences in clade B were of Asian origin (Figure 2B) the closest relatives to the NY isolates were of European and North American origin. The isolate that belongs to clade B4 is positioned in a cluster with two US sequences from WA state, with an inferred date of introduction to NY in early March (Table 1) and a prior period of untracked transmission in unknown location(s) since January 21 2020 (90% CI: January 18 to January 23). Prior to this period, the closest viral isolates basal to this cluster are from Australia and China (Figure S1). [...] 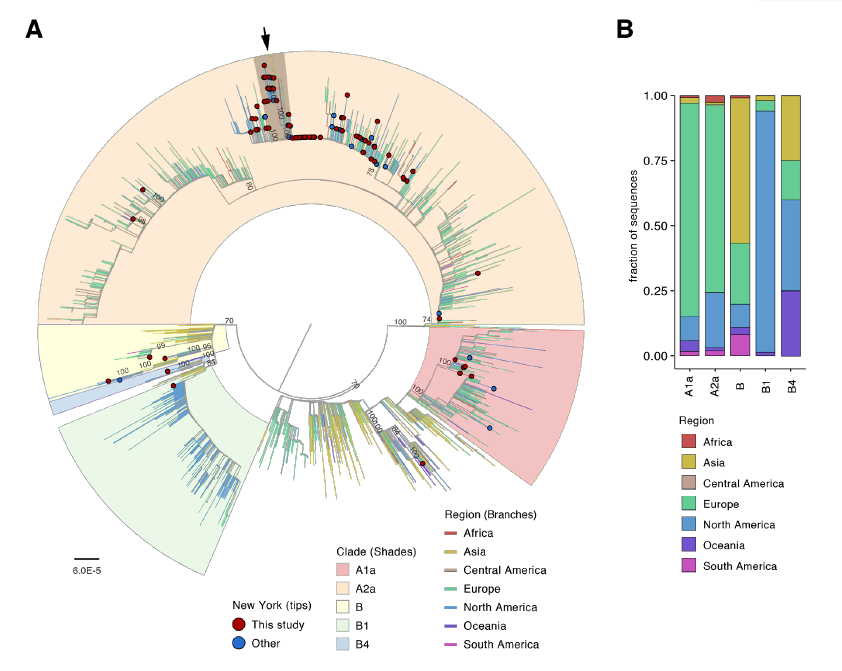 Taken together, our results show that the NYC SARS-CoV-2 epidemic has been mainly sourced from untracked transmission between the US and Europe, with limited evidence of direct introductions from China where the virus originated.

So yeah, the strain that spread the most in NYC apparently came mostly directly from Europe, but it was preceded e.g. by one from the Middle East. Why that other one didn't spread is of course hard to peg to a concrete event like luck or something else (e.g. effective quarantine) since the paper doesn't detail such matters.

Also, a smaller fraction of the NYC cases was traced (domestically) to Washington state and from there to China/Australia.

They also note some limitations of their study, mainly in terms of sampling

A limitation of our analysis is the relatively small number of isolates from cases identified in the first week of March 2020 which means that our model relies on inferences based on sequences deposited in the GISAID database. Since sequencing efforts vary by country, the fraction of sequences available by region/country is not necessarily representative of the number of cases reported for each of these regions. Thus, some of these inferences may change as more complete and representative SARS-CoV-2 sequences become available.

Also, one can quibble that NYC is a "single cluster", but I think the ISMMS paper is still interesting enough in its findings in terms of (which) strain(s) spread in NYC.

Not the answer you're looking for? Browse other questions tagged united-states europe covid-19 .

7
Have 'a lot' of New Yorkers 'fled the city' to Florida?

6
Was it illegal to discriminate on the basis of intelligence in the United States?
10
Can the president and vice president of the United States be from the same state?
41
Was there no tax before 1913 in the United States?
13
Was the United States the equal fifth deadliest country for journalists in 2018?
13
Is wearing facemasks the reason South Korea, Japan, Singapore and Hong Kong have more control of Covid-19
47
As of May 2020, are there twice as many deaths from Covid-19 in New York City as there are on a usual day from all other causes combined?
45
Were a large number of votes from suspiciously old Pennsylvanians received in the 2020 US presidential election?