Are we heading for a mini ice age?

According to the following article:

Sunspot activity is rapidly declining, and when this has happened in the past this has led to a mini ice age. I'm pretty sceptical about it myself, but is there any truth to it at all? Should I start stocking up on fire wood, and winter coats, or is this just propaganda from climate change deniers.

As Craig Stuntz said in the comments, little of what the article says seems to actually come from the one citation it gives. If you read over that article published by NASA, and also the other NASA article it links to, you'll quickly see the Register author drew some hefty/seemingly unsupported conclusions. At no point in either article do they claim we're heading for another Maunder Minimum, so... that's kind of that. We're certainly in a low sunspot cycle; that much is pretty well established. Here are a few diagrams showing that fact from the NASA articles:

Sunspot activity over the last 250 years: 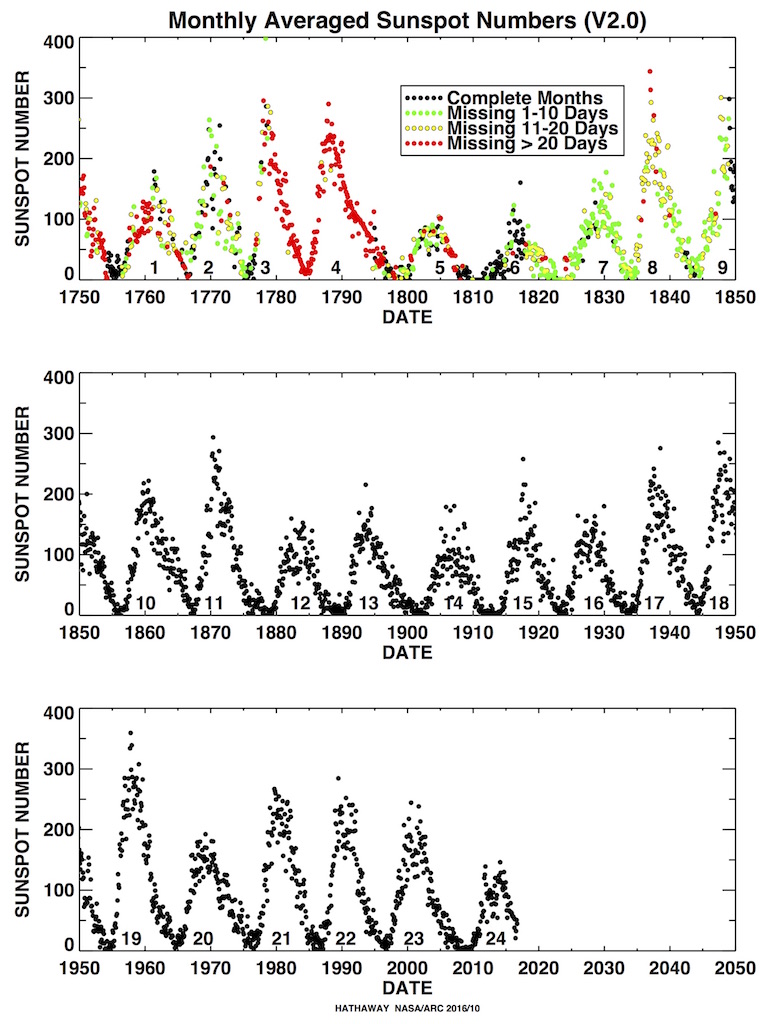 Sunspot predictions for the next decade (the second NASA article talks about how the predictions are made, nice details):

As you can see, NASA isn't really predicting we're heading for another Maunder Minimum. It'll most likely be one of the lowest cycles in recent history, but I sincerely doubt there's much need to worry.

Now, on an interesting note: The correlation between the Maunder Minimum and the Little Ice Age (LIA). It's certainly there, but it's also completely unknown if it was correlation or causation (or just dumb random chance). In the Wiki articles on the Maunder Minimum and the LIA, you can see that there definitely seems to be some relationship between lowered solar activity and cooler climatic periods, but no one really understands why. (It looks like the LIA could have happened due to volcanic activity, or even a slowdown of the thermohaline circulation.)

But what no one seems to have looked at is the relationship between the sunspot cycle and the various cooling periods within the LIA. NASA defines the LIA as:

A cold period that lasted from about A.D. 1550 to about A.D. 1850 in Europe, North America, and Asia. This period was marked by rapid expansion of mountain glaciers, especially in the Alps, Norway, Ireland, and Alaska. There were three maxima, beginning about 1650, about 1770, and 1850, each separated by slight warming intervals.

If you look at the Maunder Minimum data (from the original NASA article), you see this sunspot cycle:

So the Minimum corresponds to the 1650 cool period. But sunspots sure don't seem to account for the 1770 or the 1850 periods. All in all, there's something going on here that we don't fully understand. But it really doesn't look like sunspots are the culprit.

TL;DR: No. Well, probably not.

Edit: Linked to in comments by Larian LeQuella, here's a great Bad Astronomy article discussing all this and more. Hooray, same conclusions!

The Register report is not particularly informative.

This is news from the American Astronomical Society meeting in New Mexico State University in Las Cruces, being widely reported, for example here. The often skeptic site Watt's Up With That has a copy of the press release, which seems to have been the basis of the Register story.

While the current sunspot Cycle 24 started late and is predicted to be lower than previous cycles, as discussed in erekalper's answer, this is not news. What is news is that different organizations are failing to see the usual precursors of Cycle 25, and so are suggesting that it may be very low. Whether this turns out to be correct will be seen.

The press release has quotes from Dr. Frank Hill, associate director of the National Solar Observatory’s Solar Synoptic Network. It ends with

All three of these lines of research to point to the familiar sunspot cycle shutting down for a while. “If we are right,” Hill concluded, “this could be the last solar maximum we’ll see for a few decades. That would affect everything from space exploration to Earth’s climate.”

As with any such research, stating a possible link to climate may suggest that more research needs to be funded. When the magnitude of the links to climate are uncertain, as with all such climate-related claims of "could" or "may", they should be treated with the skepticism they deserve, whether they point upwards or downwards.

20
Did the development of agriculture prevent an ice age occurring?
8
Are glaciers melting?
49
Did the Arctic Ice Sheet grow by 60% from 2012 to 2013?
0
Does Beck's chemical analysis of CO₂ discredit the Law Dome ice core findings?
3
Is there more global sea ice than 35 years ago?
6
Did both higher temperatures and an ice age exist at CO₂ levels ten times the present?
11
Are polar bears doing well despite a reduction in sea ice?
14
Is Antarctica gaining or losing ice?
6
Is this picture of the melting ice at the North Pole legitimate?
41
Are environmentalists largely responsible for Californian forest fires?