Coronavirus - Is it safe to receive a package from China?

The World Health Organisation (WHO) has stated that is 'safe' to receive packages from China. 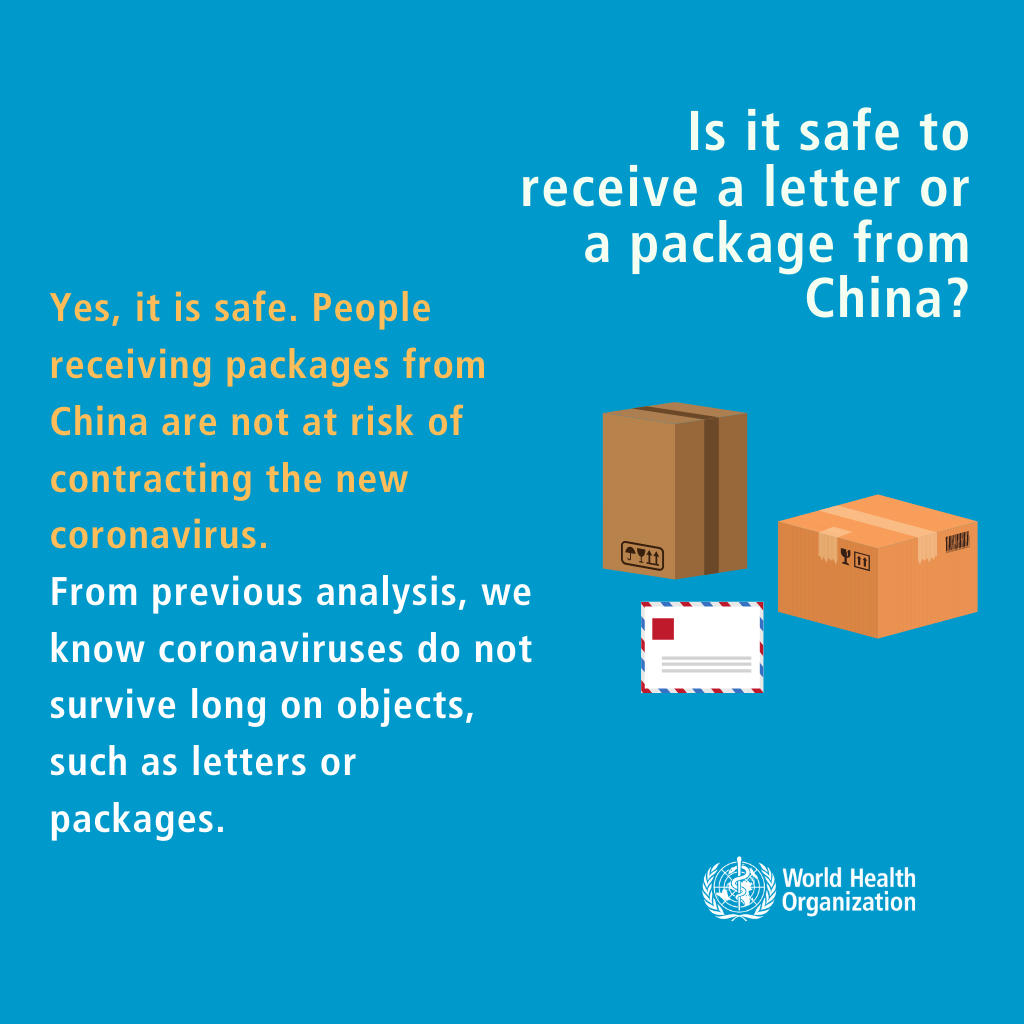 Is it safe to receive a letter or package from China?

Yes, it is safe. People receiving packages from China are not at risk of contracting the new coronavirus. From previous analysis, we know coronaviruses do not survive long on objects, such as letters or packages.

No citation is provided.

Doing some quick searches on coronavirus survivability, I found a recent paper titled Persistence of coronaviruses on inanimate surfaces and its inactivation with biocidal agents

It contains a table of the persistence of coronavirus on various surfaces.

In summary, the survivability of SARS is 4-5 days on metal and paper.

SARS is another coronavirus, and I believe the RNA sequence is 80% identical to 2019-nCov. Similar survivability could be expected.

Most of the tests in the above paper were carried out at room temperature. However it states that TGEV, another coronavirus, can last 28 days at 4°C.

This appears to contradict the WHO claim.

Listed below are some examples of expedited international delivery from China to various countries.

I do believe that most packages received from China will be safe but is the WHO ignoring the possibility of risk in the following scenarios:

"enveloped viruses, including H1N1 and human coronaviruses, remain infectious on surfaces after several days" Survival of Enveloped and Non-Enveloped Viruses on Inanimate Surfaces

In an attempt to back up the WHO's claim but not using their data or statement. The 'Corona 2019' virus is a specific variant of the more general corona virus family. Further, this family is part of a broader family of viruses known as enveloped viruses, with envelops usually composed of lipids and proteins, and are required for a virus to be infectious to a host cell:

Functions of the envelope protein: Despite its enigmatic nature, research conducted to date has been able to propose three roles for the CoV E protein. The interaction between the cytoplasmic tails of the M and E proteins drives VLP production, suggesting that E participates in (1) viral assembly [56, 61, 89]. The hydrophobic TMD of E is also crucial to the (2) release of virions [40, 53, 159]. Lastly, SARS-CoV E is implicated in the (3) pathogenesis of the virus [18, 82, 87]. The progress made in these three aspects of E will be reviewed accordingly.

Enveloped viruses are easier to disarm since the envelop itself is easily destroyed by drying out, alcohol exposure, and temperature, which can denature the lipid layer and proteins. Studies have shown that regular drying from air can drastically impact the non-host lifetime of enveloped viruses:

In the latter study, it is important to note that those survival times were likely optimal cases, since the study itself was attempting to see the survivability rate of enveloped viruses and was done under very specific circumstances and under controlled temperature. The general infectious viability of enveloped viruses in non-host, uncontrolled conditions is very low:

The genome of either virus could be detected on most surfaces 24 h after application with relatively little drop in copy number, with the exception of unsealed wood surfaces. In contrast, virus viability dropped much more rapidly. Live virus was recovered from most surfaces tested four hours after application and from some non-porous materials after nine hours, but had fallen below the level of detection from all surfaces at 24 h.

While it isn't stated explicitly for most of that study (only a small mention at the end), the viability of the virus stated is functionally because the H1N1 is also an enveloped virus.

Technically it comes down to what your view of what is "safe." However, by research of general enveloped viruses, and there has been no evidence that the 2019 corona virus is any different, an enveloped virus is unlikely to be infectious after a short period of time in an uncontrolled environment both from drying as well as temperature changes. Packages and other shipments would certainly count as an inhospitable uncontrolled environment for enveloped viruses. Statistically it is possible, but such a small chance that it is unlikely to be of any legitimate cause for concern, especially compared to directly infectious individuals and the like.

You are quoting the WHO and then say 'no citation is provided'. The WHO is the source. They are well equipped to research these kind of questions and it is part of their job to issue recommendations and rules about these kind of things.

So receiving a package from China is safe, source the WHO. On the other hand, travelling to Wuhan in person is currently not recommended, source also the WHO.

As a commentor noted, this answer assumes that the statement is actually from the WHO and not a fake. This is the case, see this WHO site.

CDC: There is still a lot that is unknown about the newly emerged COVID-19 and how it spreads. Two other coronaviruses have emerged previously to cause severe illness in people (MERS-CoV and SARS-CoV). The virus that causes COVID-19 is more genetically related to SARS-CoV than MERS-CoV, but both are betacoronaviruses with their origins in bats. While we don’t know for sure that this virus will behave the same way as SARS-CoV and MERS-CoV, we can use the information gained from both of these earlier coronaviruses to guide us. In general, because of poor survivability of these coronaviruses on surfaces, there is likely very low risk of spread from products or packaging that are shipped over a period of days or weeks at ambient temperatures. Coronaviruses are generally thought to be spread most often by respiratory droplets. Currently there is no evidence to support transmission of COVID-19 associated with imported goods and there have not been any cases of COVID-19 in the United States associated with imported goods. Learn more about COVID-19.

Not the answer you're looking for? Browse other questions tagged healthcare virus covid-19 .

31
Was the virus which causes COVID-19 made in a Chinese lab?
19
Did SARS-CoV-2 originate from ‘People letting animal blood drip on their food’?
47
Is COVID-19 more dangerous than typical annual coronavirus variants?
2
Have COVID-19 vaccination trials started in Seattle?
6
Was the Wuhan Center for Disease Control & Prevention hosting coronavirus-infected bats near the COVID-19 initial outbreak?
7
Do the COVID-19 vaccine candidates risk inducing infertility in women?
6
Did SARS-CoV-2 appear in some (Mojiang) Chinese miners in 2012?