Was the Holocaust legal?

In the below image, which has been circulating on social media, it is implied that the Holocaust was legal in the same way that slavery and segregation were legal. Is this true? Was the Holocaust legal? 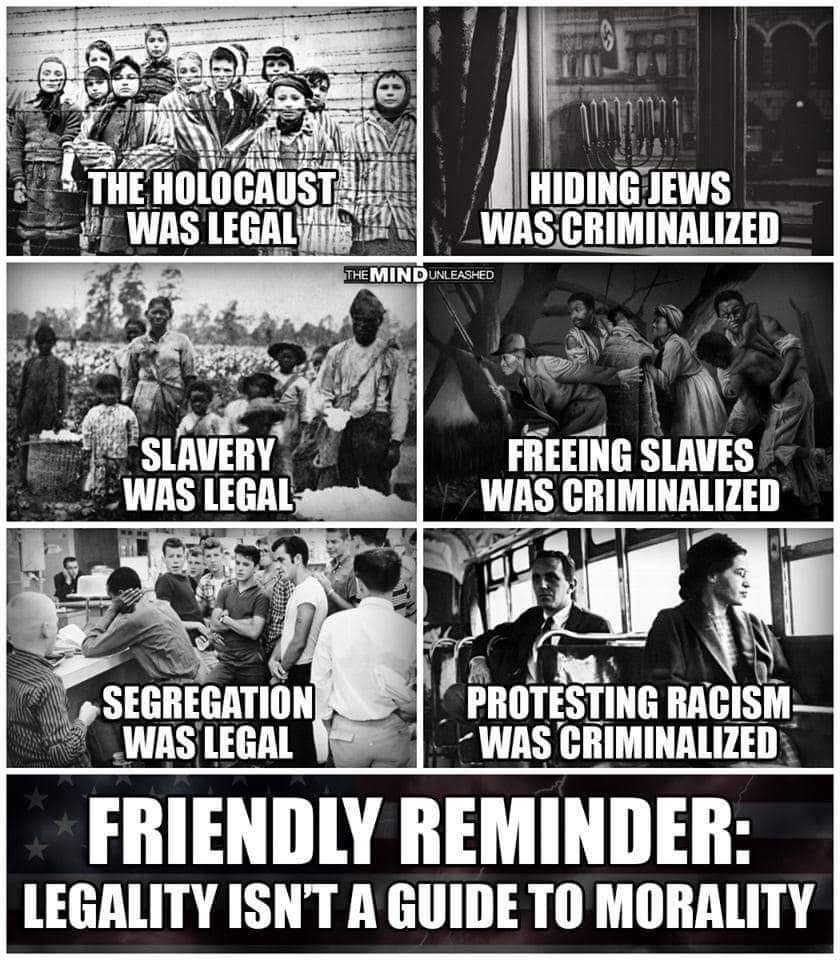 According to the Nazis' definition of "legal", it was.

According to the Führerprinzip in Nazi Germany, Hitler was above the law by definition. His directives were statutory orders, i.e. law -- even if...

Many of them are direct evidence of the commission of war crimes such as the notorious Commando Order.

There is no historic proof that Hitler directly ordered the mass extermination of Jews in writing, but then, he didn't have to. Whatever the Nazi state did was by definition "legal".

Because, also according to this principle, lower echelons of the Nazi leadership had complete responsibility over their areas, and answered only to their superiors. Law in Nazi Germany was already wildly antisemitic (e.g. robbing Jews was "legal", and Jews were forced by law to hand over any jewelry of value), and henchmen had wide leeway to "interpret the wishes of the Führer" (which could be verbal, or just inferred) even further. The Volksgerichtshof for example certainly did not follow, and did not have to follow, any kind of due process.

The Wannsee Conference, for example, was a meeting of "second-level functionaries" only, but the verdict was clear:

Under proper guidance, in the course of the final solution the Jews are to be allocated for appropriate labor in the East. Able-bodied Jews, separated according to sex, will be taken in large work columns to these areas for work on roads, in the course of which action doubtless a large portion will be eliminated by natural causes. The possible final remnant will, since it will undoubtedly consist of the most resistant portion, have to be treated accordingly, because it is the product of natural selection and would, if released, act as the seed of a new Jewish revival.

The question of legality is a tricky one, as can be seen by the discussions of the legality of the Nuremberg trials (can a court penalize people for something that wasn't illegal in their jurisdiction at the time?) or Befehlsnotstand (can a court penalize people for doing something when refusal to do so would put them in serious harm's way themselves?).

But, as the poster / picture / meme quite correctly states, "Legality[1] isn't a guide to morality". And Germany had seen fit (if regrettably late) to prosecute and penalize those who participated in the Holocaust willingly, or at least without putting up much in the way of resistance. Because the laws of Nazi Germany in this regard, and the Holocaust in particular, were so obviously insane and inhuman that the "legality" of the time ceased to be a guide, or even an excuse.

This -- that justice has to trump law when the law is evidently and unbearably unjust -- was formulated in 1946 as the Radbruch formula.

Starting in 1942 Hitler could personally dismiss any civilian judge. Also starting that year the Jewish prisoners became the responsibility of the SS (by an order of Thierack, the newly appointed Reich Minister of Justice.) [source: Law and the Holocaust, United States Holocaust Memorial Museum]

So the only system in which the execution/extermination of Jews could have been legally challenged [thereafter] was the SS, which had its own parallel justice system.

There was actually an SS jurist (Georg Konrad Morgen) who went against the trend so to speak; after the war he claimed that his investigations of various SS camp officers (during the war) were aimed at stopping the killings. The facts however are that he did not manage to prosecute anyone (during the war) for killing Jews, but for other reasons, e.g. misappropriating Jewish gold, which was supposed to go to a state fund. Morgen also tried to prosecute some camp commanders for killings (that he thought hadn't been ordered), but this didn't go very far.

Obergruppenfuehrer Müller was surprised to hear about the illegal executions in the concentration camps, namely about the acts committed in the concentration camps against the law and he was also surprised at the large extent of crime, but he was not at all surprised that there was an extermination of the Jews, that there were [sic] inhuman treatment which had been ordered, and, he said to me, ironically, “Why don’t you arrest me.”

I petitioned the SS Court at Berlin to carry out the investigations into Eichmann on the basis of my leads. The SS Court in Berlin thereupon submitted to the chief of the Reich Security Main Office, SS Obergruppenführer Kaltenbrunner, in his capacity as highest judge, a warrant to arrest Eichmann.

Dr. Bachmann reported to me that this submission resulted in dramatic scenes.

Kaltenbrunner immediately called in Müller, and now the judge was told that an arrest was in no event to be considered, for Eichmann was carrying out a special secret task of utmost importance entrusted to him by the Führer.

As Eichman recalled the same incident, the charges involved a missing pouch of diamonds (presumably from a Jewish source) but he also says that he ultimately received a public apology:

I heard that Judge Baumann had made an application for my arrest to my judicial superior, Kaltenbrunner, and had been turned down there [...] and therefore I asked for this Judge Baumann or Baumgarten to apologize to me in the presence of the members of my Section. And the man came and apologized to me for the treatment I had received.

And even Morgen would not challenge the legal status of any order of Hitler...

In Morgen’s opinion, the fact that the “euthanasia” order was secret, known at the time only to two or three people, does not undermine its status as law, despite the traditional conception of law as necessarily public. He says that Hitler’s powers as supreme lawgiver included not only the power to dictate laws but also the power to set the criteria of legal validity, hence to cancel the requirement of publicity.

And regarding the killing of Jews more specifically, Morgen knew that some of the orders came at least from Himmler, which was enough for Morgen to judge them as legal, as he related a conversation with Globocnik:

He laid out the story of his life and told me, among other things, what he had accomplished for the Reichsführer [Himmler] with Aktion Reinhard. [...] And from that I saw that because these killings had been ordered, the thing was legal in the sense of National Socialist law, and so as for doing anything directly against this sector, my hands were tied.

Quotes from Konrad Morgen: The Conscience of a Nazi Judge by H. Pauer-Studer and J. Velleman.

So as you can see, the higher-ups in the SS were aware of the orders to kill Jews and considered them legal. And by the arrangements of the German justice system then, they were also the sole German authority on the legality of the matter at the time...

Of course from the perspective of international law the Holocaust was later deemed highly illegal, more precisely a crime against humanity in the Nuremberg Charter.

As other answers have said, in Nazi Germany the Nazi party was the recognised government, and hence made the laws and administered them. The Holocaust was carried out under these laws, so from the practical point of view of someone in Germany or German-occupied countries at the time the Holocaust was legal.

The concept of Crimes Against Humanity had originated during WW1 with the Armenian Genocide, so the idea that genocide was an illegal act under international law was already around. However set against this was the legal principle dating back to (roughly) the Peace of Westphalia that individual states could govern themselves as they saw fit. It was only with the Nuremberg and Tokyo trials that the concept was extended (somewhat post-hoc) to make it unambiguously clear that crimes against humanity were crimes regardless of national law.

That depends on how you define "legal", and the conclusion that "legality isn't a guide to morality" is potentially misleading.

If "legal" means "allowed by the letter of the law", and you assume that German laws were legitimately applicable in the conquered territories, then yes - after the Enabling Act of 1933 gave the government the ability to pass laws that overrode even the constitution, Hitler's directives were effectively laws, and a formal distinction between laws and mere orders was increasingly not made as the war progressed.

However, you can also define "legal" to encompass the broader principles of rule of law - that laws apply to everyone equally, that they protect everyone equally, and especially act as a constraint on government powers (which implies a separation of powers). Then, the Holocaust, the directives that "legalized" it and the Enabling Act that made this possible are all very flagrant violations of these principles. As are the other examples mentioned (slavery, segregation).

Therefore, I believe that the principle of rule of law and also a body of laws following that principle are in fact one guide to morality - not the only one you should pay attention to, but by itself useful and valid because it's going to be a whole lot more comprehensive and detailed than the Golden Rule it's ultimately based on.

Not the answer you're looking for? Browse other questions tagged law holocaust .

31
Is it illegal in the U.S. for legal professionals to answer legal questions on public Internet forums?
10
Is necrophilia legal in California?
9
Does giving legal advice make you liable?
12
Is it legal in the Philippines to kill a spouse caught cheating?
13
Did 5 million non-Jews die in the Holocaust?
3
Did a Jewish boxer survive the holocaust by fighting fellow prisoners?
10
Is there any evidence of individual Jews participating in the Holocaust?
15
In the USSR's legal system, was everything illegal unless specifically allowed?
7
Is there a bill in Iowa that bans the teaching of sexism, slavery, and racial segregation?