On the packaging, there are a number of claims about the benefits of vacuum blending:

Are these claims valid? 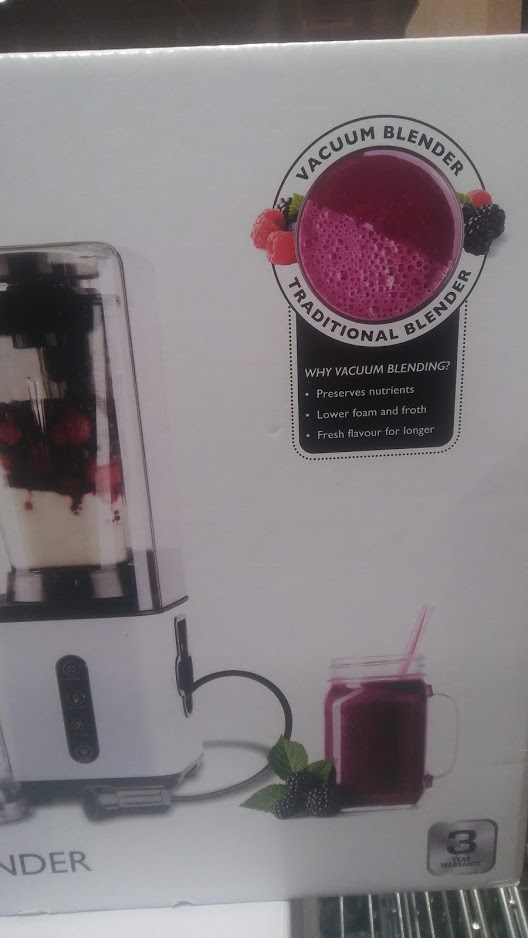 Does vacuum blender cause less foam/froth and taste better?

There are pictures and videos of several fruit/vegetable smoothies with obviously less frothing after vacuum blending. The claim has been also repeated in various reviews.

"In vacuum mode, all four blenders made smoothies that were smoother, less foamy, and more consistent in texture than the smoothies we made in regular mode," says Cindy Fisher, who oversees our blender tests.

In our informal taste test, staffers found that the smoothies were comparable...

In a review by Which.co.uk, they also observed the difference in frothiness but not in taste.

It makes your juice taste better and last longer.

So, the reviewers agree about less froth, but not necessary about the better taste of smoothies prepared by vacuum blenders.

1) In this video, an apple smoothie made with a vacuum blender remains green, while the one made with a usual blender becomes progressively brown within 10 minutes. The browning is due to oxidation of polyphenols after exposure to air in the same way as in cut apples (Science Focus). From this video alone, it is not possible to quantify the effect: what percent of polyphenols got oxidized and how less nutritious would such a smoothie be.

The University of Natural Resources and Life Sciences, Vienna (BOKU) conducted independent research. They found that preservation of nutrients is higher with a high speed vacuum blender compared to normal blending for vitamin C and antioxidants. Up to three times more of vitamin C was persevered after 8 hours vs normal blending and 60% more antioxidant activity preserved after 8 hours.

After 8 hours, the loss of vitamin C in the smoothie made by a normal blender was ~250% greater and the loss of antioxidants ~60% greater than in the one made by a vacuum blender, but they don't say what was the difference after only 1 hour.

In one study with a strawberry juice prepared by a usual blender, less than 20% of vitamin C was lost after 1 hour of storage at 28 °C, but almost 100% after 8 hours (Figures 3 and 4). This clearly suggests that the loss of vitamin C in a smoothie prepared with a usual blender (in the Phillips study mentioned above) would be also much smaller after 1 hour than after 8 hours.

Not the answer you're looking for? Browse other questions tagged nutrition cooking .

4
Do longer shipping times and/or distances impact the nutritional content of produce?
8
Do juicers preserve the nutritional quality of fruit and vegetables?
36
Are most of the nutrients of vegetables and fruits contained in the peel?
4
Does Diet Coke “attack your teeth, switch on fat storage mode, cause addiction, and deplete nutrients”?
14
Is food becoming less nutritious because of depletion of soil minerals and nutrients?