Does ascending one step burn 0.1 kcal of energy?

The Tsukuba Express Akihabara station has 0.1 kcal markings painted on the steps up from the platform. 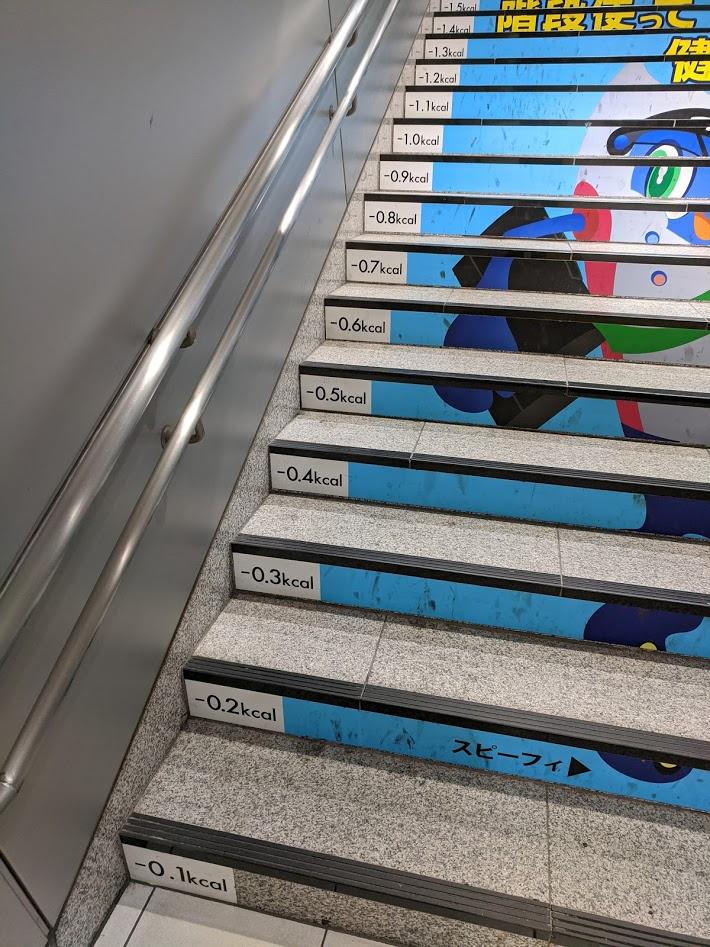 Is this accurate? Obviously it's going to depend on the person but broadly speaking do you burn approximately 0.1 kcal per step?

The top step is 4.0 kcal. Pretty depressing and makes me feel better about taking the escalator.

TL,DR: it's in the right ballpark (but depends on how much you weigh, what you're carrying, how fast you're going, etc.).

For the elevation alone (not counting the extra energy spent moving your legs), the energy cost to climb a height h is m * g * h where m is your mass and g ≈ 9.81 m/s2 is the gravitational acceleration. For a mass of 70 kg (≈ 11 stone, close to the average human weight plus a little extra for what you're carrying), the energy cost is thus 686 J/m = 0.16 kcal/m = 0.05 kcal/ft. 4 kcal would bring you up 23.4 m (80 ft). Even without knowing the exact step size, this is a lot less than the values painted on that staircase. However, keep in mind that this is purely the cost of elevation, and there's an extra cost in moving your legs. The physics is solid for this being a minimum, but you need to experiment with the biology to see how much energy is consumed for purposes other than strictly fighting gravity.

An actual study found that the cost of climbing stairs for a 70 kg person was about 0.15 kcal per step, for 20.3 cm (8 in) steps (going at 1.17 step/s), i.e. about 0.74 kcal/m. For comparison, going downstairs costs about one third of that. The steps in that Japanese station are probably somewhat less than 20 cm tall, so 0.1 kcal per step is in the right ballpark.

For comparison, a human standing at rest consumes about 125 W, i.e. about 0.03 kcal/s. So it seems that walking downstairs roughly doubles your energy consumption (and walking straight costs very slightly more), and walking upstairs multiplies it by about 5. That second source gives a fairly similar figure (0.16 kcal/s) for climbing stairs (but at a faster pace of almost 2 steps/s), by the way.

The 'mgh' analysis given by @Gilles is correct but for a consideration of muscle efficiency - the ratio of useful mechanical work (energy) output to biochemical energy input for human muscle. This is often quoted as being around 18-26% e.g. as referenced here https://en.wikipedia.org/wiki/Bicycle_performance. So yes, to get the kCal. burned you would have to multiply the 'mgh' value by about 4 or 5; or conversely to get the height representing a burn of 4 kCal, you would have to divide @Gille's 23.4m by about 4 or 5 - giving about 5m.

CalorieLab has a calculator for calories burned per type of activity. If you type in a weight 70 kg (155 lbs) and chose "Walking," you get a chart for various walking activities and one says that walking upstairs whilst carrying 1-15 lb load for 15 minutes burns 70 Calories (kilocalories). If you say that 1 step takes 1 second, and 15 minutes = 900 seconds, it means that by 1 step you burn 70/900 or 0.078 Calories, which is close to the 0.1 Calorie markings on those Japanese steps.

To cross check the result, the same chart says that walking 4 mph (6.6 km/h) for 15 min on flat surface also burns 70 Cal/15 minutes and according to other sources (Harvard Medical School, myDr, ChooseMyPlate, Mayo Clinic), ~70-85 Cal/15 min, which is just to say that these calculators seem to be roughly comparable and reliable.

It's not clear how these calculators work, but the data on Mayo Clinic are based on Ainsworth BE, et al. 2011 compendium of physical activities: A second update of codes and MET values (Medicine & Science in Sports & Exercise. 2011;43:1575).

Yes, losing only 4 Calories by climbing a staircase is not much; this is because it takes only a short time and is not such a high intensity exercise as it may sound. To put this into perspective, brisk walking, which is about as intense as stair climbing, can burn more than 300 Calories per hour (as shown in the linked charts).