Was Greta Thunberg unable to find a seat on an overcrowded train?

Greta Thunberg tweeted an photo of her sitting on the floor of a train, surrounded by baggage, with the text:

Traveling on overcrowded trains through Germany. And Iâ€™m finally on my way home!

A German railway company has taken back an apology they made to Greta Thunberg after they realized the climate activist wasnâ€™t schlepping it on the trainâ€™s floor but instead was treated â€śfriendlyâ€ť in first class.

The rail company was responding to an image Thunberg tweeted of herself sitting amid bags and suitcases on the floor of what she called â€śovercrowded trains through Germany.â€ť

This was later rebutted by Greta as follows:

Our train from Basel was taken out of traffic. So we sat on the floor on 2 different trains. After GĂ¶ttingen I got a seat.This is no problem of course and I never said it was. Overcrowded trains is a great sign because it means the demand for train travel is high!

Is it true that Greta was chose to sit on the floor of a train because she couldn't find a seat? Was a train from Basel taken out of service around the time of her trip?

German trains (or more specifically, trains run by Deutsche Bahn/DB , which is the only really major train company in Germany and the one that ran Thunberg's train) take on more passengers than available seats. It is possible to place seat reservations in advance in addition to the purchase of your train ticket. If you don't make a reservation, you can still get on board of a train you have a valid ticket for, but if the train is crowded, you may have to stand in the aisle for the duration of your journey. Some people (mostly younger passengers) prefer to sit on the floor to standing, but this is absolutely not compulsory.

The tweet by Thunberg was posted on December 14, 2019. Indeed, on that day there was a train cancellation on the line between Basel and Hamburg, the line on which Thunberg was travelling. According to the website www.zugfinder.de, which archives German train connections and offers free access to the last 30 days of their database, DB did cancel ICE 78, which was originally scheduled to depart from Basel at 7:06 and arrive at Hamburg at 13:52 ("Zug ist ausgefallen" means "train was cancelled"): 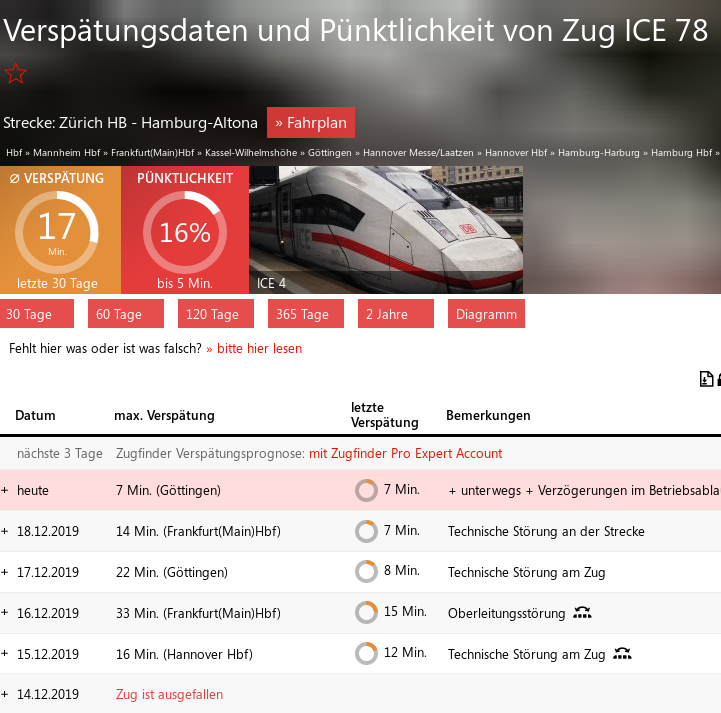 So, what apparently happened is this:

To anyone who has traveled with Deutsche Bahn, this will sound like a very familiar experience: nothing in this reconstructed chain of events is in any way spectacular, with possibly the exception that DB responds to a post on Twitter. In fact, this is the only thing that is actually kind of noteworthy (as @tim pointed out in a comment). Here's what they posted in their tweet:

"Dear #Greta, thank you for supporting railways in the fight against climate change! We were happy that you traveled with us in the ICE 74 on Saturday. And with electricity from 100 percent renewable sources. It would have been even nicer if you had also reported how friendly and competently you were treated by our team at your seat in first class." (my translation)

I can see that this response stirred some public attention, and there's currently a discussion about DB's "passive-aggressive" tone (as @tim called it in his answer) and whether DB violated Thunberg's privacy by disclosing this information. But the fact that she sat on the floor on a German train is really a non-event.

The issue started with a Tweet by Thunberg showing her sitting on the floor because of "overcrowded trains":

The German train company responded with a passive-aggressive tweet saying that she had a first class seat reserved.

This resulted in attacks against Thunberg online, as well as accusations that the image of her sitting on the floor was fake.

But Thunberg was not able to take the reserved seat because her train was canceled, and she had to use an alternative train, thus losing her reserved seat. She got a seat later in her journey. The train company issued a press release, which specified that Thunberg had a seat between Kassel and Hamburg (implicitly admitting that she did not have one before then).

Journalists who accompanied her confirmed the change of trains and that she did indeed had to sit on the floor (see also here, here, or here).

To state the obvious: she "had to sit on the floor" in the sense of 'no seats were available'; not literally forced or restrained to the floor, which nobody involved claimed (she could have stood, left the train, etc).

Not the answer you're looking for? Browse other questions tagged germany transportation .