Was it traditional for MPs to fully recline on a House of Commons bench? 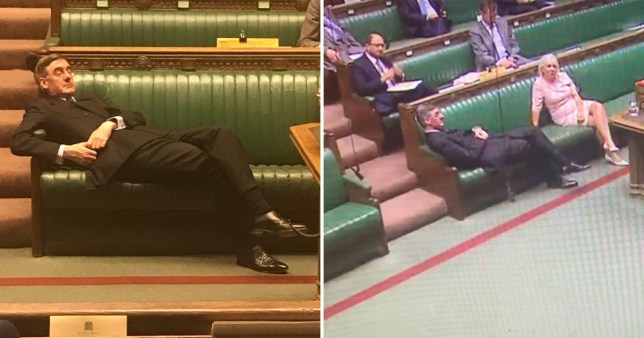 JRM: It's very traditional to sit like that in the House of Commons, it has to be said.

Christopher Hope, Interviewer & Telegraph's Asst Editor: But is it OK on the front bench?

JRM: Do you know, in hindsight, I think not. And sitting comfortably distracted from the importance of what was going on. I do accept it was a mistake.

Other MPs seem to disagree.

“Now, there’s been a lot of talk about democracy tonight and the Leader of the House, who – I have to say – with his body language throughout this evening has been so contemptuous of this house and of the people,” said the Green party MP, Caroline Lucas, as other MPs shouted at him to sit up.

She added, for the benefit of parliament’s written record, that Rees-Mogg had been “spread across three seats, lying out as if that was something very boring to listen to tonight”.

The Labour MP, Anna Turley, called Rees-Mogg’s slouching the “physical embodiment of arrogance, entitlement, disrespect and contempt for our parliament”.

'Sit up!' – Jacob Rees-Mogg under fire for slouching in Commons | Politics | The Guardian

Certainly the benches do permit a greater degree of slouching (for example, note the MP to Rees-Mogg's left), though I certainly don't recall seeing anyone sit fully reclined like that.

As mentioned here in a comment, some believed he could be trying to hear better as the speakers are at the back of the bench.

However, in an encounter with reporter Joe Pike, Rees-Mogg says that was not his intention.

Me: Were you lying back, trying to hear?

Were it to be common, he or his supporters/allies would have defended him with such a claim; note in your quote he abandons this argument very quickly.

MSN UK labels his response as a jest:

It would seem there is nothing traditional about it; it's a man who at worst is displaying contempt for the politics and at best is just being comfortable.

15
Was McCarthy directly involved with the House Un-American Activities Committee (HUAC)?
16
Was the September 2012 jobs report manipulated for political purposes?
10
Was there an electoral fraud during the referendum for the independance of Scotland?
6
Was inbreeding responsible for haemophilia in royalty?
2
Did the House of Commons Foreign Affairs Committee's report say NATO's intervention in Libya was based on "lies"?
31
Was Facebook cited as a reason for a third of UK divorces in 2010 in which unreasonable behaviour was a factor?
9
Did White House staff have problems booking a hotel for Trump for G20?
11
Did House Minority Leader Nancy Pelosi say that she hopes banning bump stocks is a slippery slope for more gun restrictions?
45
Was the Obama administration responsible for the decision to move the US embassy in London and the sale of the old location?