Did Macaulay address the British parliament about Indian culture?

There is a viral photograph and a passage about Lord Macaulay's address in the British Parliament about India. 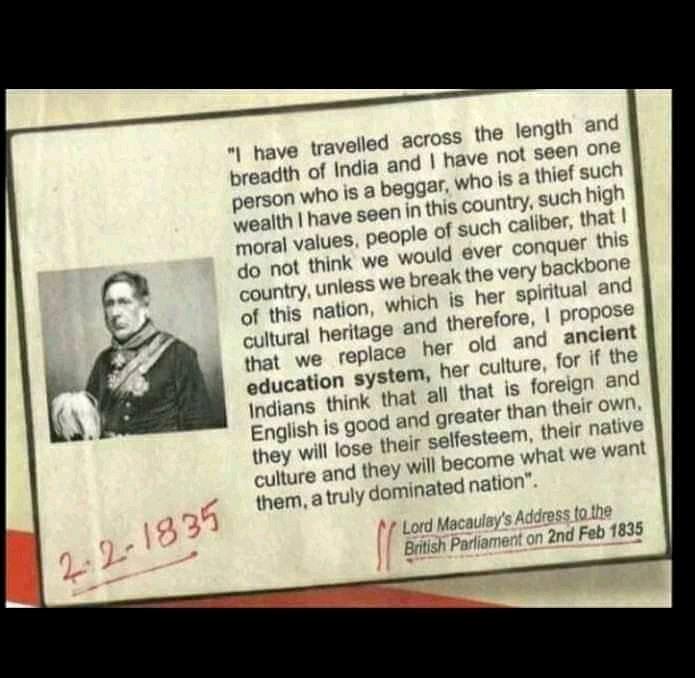 "I have travelled across the length and breadth of India and I have not seen one person who is a beggar, who is a thief such wealth I have seen in this country, such high moral values, people of such caliber, that I do not think we would ever conquer this country, unless we break the very backbone of this nation, which is her spiritual and cultural heritage and therefore, I propose that we replace her old and ancient education system, her culture, for if the Indians think that all that is foreign and English is good and greater than their own, they will lose their selfesteem, their native culture and they will become what we want them, a truly dominated nation". - Lord Macaulay's address to the British Parliament 2nd February 1835

According to this quote, Macaulay wanted to propose an education system in India which focuses on foreign culture and English, destroying ancient Indian culture in the process.

What did Macaulay speak in the parliament while introducing the English Education Act of 1835? Did he talk about introducing English in India so that people will forget their own culture?

Not only was parliament dissolved at the time the claim states he made this address, but Lord Macauley wasn't even in the country.

He'd left for India in December 1834 and then stayed there for the next five years.

It is possible that the author of the claim was merely mistaken about the context of something that he did say, but they were definitely incorrect in what they are claiming. Macauley did write a piece about education in India on that day, however the above quoted piece does not feature in it at all. Although he argued for removing support for some of the Hindu and Islamic schools, to be replaced with the teaching of English, this was in the belief that the interests of the people of India would be best served by doing so.

It is possible to make natives of this country thoroughly good English scholars, and that to this end our efforts ought to be directed.

The full text can be found here:

For the record, both Vice and The Quint have debunked this particular claim some time ago.