Did an Irish teen accidentally fire a bottle rocket at Queen Elizabeth IIs Motorcade during her 1977 Silver Jubilee visit to the Isle of Man?

I just came across this screenshot of a Tumblr conversation on Twitter: 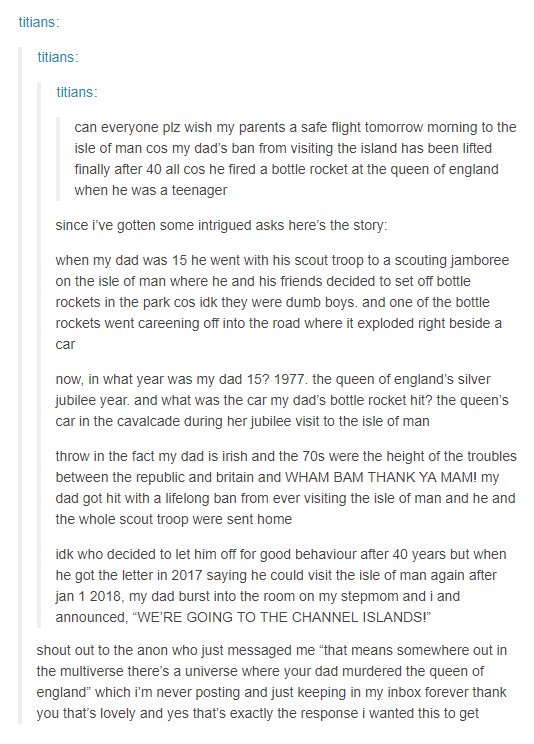 In the story, the author describes how his father took part of a scouting jamboree on the Isle of Man in 1977 and set off some bottle rockets. One of the bottle rockets went off-course and exploded right besides the car that was driving around Queen Elizabeth II during her 1977 Silver Jubilee. Because this was during the height of the Troubles, his dad got a lifetime ban from the Isle of Man that didn't get lifted until 2017.

when my dad was 15 he went with his scout troop to a scouting jamboree on the isle of man where he and his friends decided to set off bottle rockets in the park cos idk they were dumb boys. and one of the bottle rockets went careening off into the road where it exploded right besides a car.

now, in what year was my dad 15? 1977. the queen of england's silver jubilee year. and what was the car my dad's bottle rocket hit? the queen's car in the cavalcade during her jubilee visit to the isle of man

throw int he fact my dad is irish and the 70s were the height of the troubles between the republic and britain and WHAM BAM THANK YA MAM! my dad got hit with a lifelong ban from ever visiting the isle of man end he and the whole scout troop were sent home

I'm skeptical of this story because I can't find a single other source anywhere online, although this predates the internet by about 20 years so that's not too suprising, and they probably tried to keep it a bit on the down-low because of the age of the person involved.

Did this above described event happen?

5
Did Queen Elizabeth attempt to warn her nation that "2017 will be a year of slaughter the likes of which we haven’t seen since World War 2“?