This image has been floating around on social media (e.g. 9gag 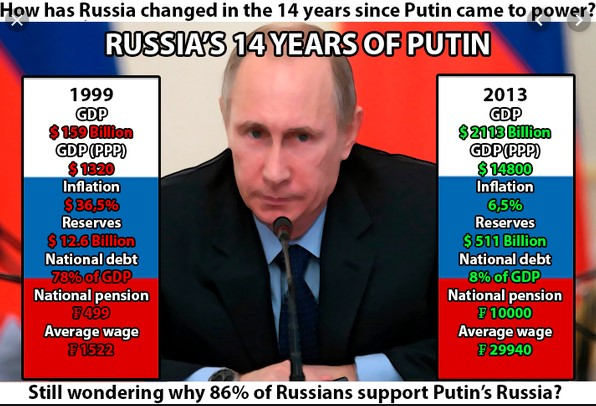 It claims that Putin has been in power since 1999, and in the first 14 years:

Picture is a bit strange in some details, like: "Inflation: $ 36.5%". Picture also leaves open quite a few important details: the exact figures used, based on what, corrected for inflation, and sourced from where?

But the basic message of those numbers is at least roughly in the right ball park and displaying the real trends for the claimed timespan.

The figures for debt and wages need to be taken with pinches of salt anyway. Plus, only the pension numbers are mostly a political decision, directly attributable to government actions. But the fact remains that after 1998 Russia was in a sustained economic boom that continued – with a short slump in 2008 due to the world's banking crisis – until 2014.

A big problem is that the picture mixes rubles and dollars. In 2018 the average pension was 14,144 RUB, which sounds way more impressive than the $213 this would exchange to. The ruble inflation was at the beginning massive, then substantial until it reached low levels. It is unclear how and even if that is accounted for in the meme's numbers. A default on debt in the meantime and substantial devaluation of the ruble also have to be factored in for comparability.

That means: the trends displayed are still real, but the actual numbers used are compiled rather sloppily and give the illusion of precision. Overall, the situation reached a rather rosy looking peak of indicator numbers in 2013. After that point the picture is less rounded. 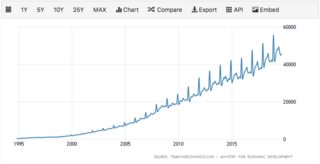 based on data from Knoema (World Data Atlas, Russian Federation): 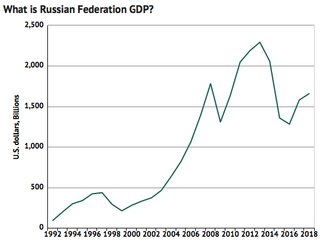 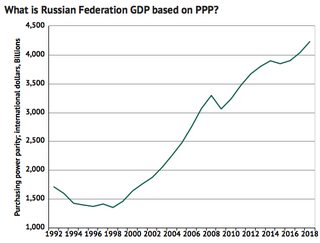 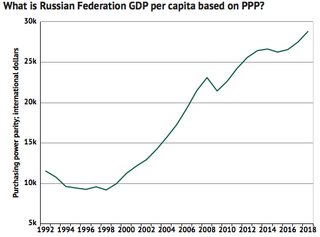 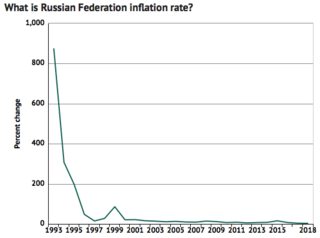 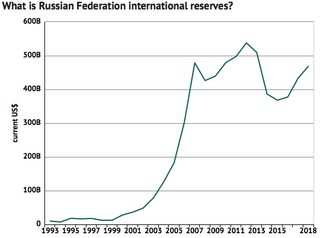 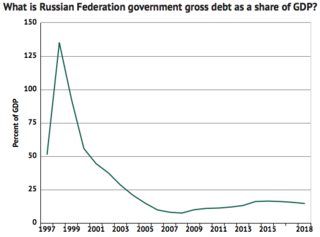 There is some necessary historical context:

Following the collapse of the Soviet Union, under Yeltsin the West effectively plundered the remains which where undergoing a difficult transition anyway. The 'recommendations' of international organisations were as usual ideological and hence highly dysfunctional. From a Russian perspective. There where huge profits made, but largely flowing out of the country. Putin did put up a large stop sign for the sell out part. From 1991 until 1998 Russia was in permanent crisis that culminated in the 1998 Russian financial crisis. That makes for a good starting point in statistics: standing in a cellar the only way is up. (Refs for that era of privatisation catastrophe, market failure etc abound, but a good starter would be an inside look by Roy Aleksandrovich Medvedev: "Post-Soviet Russia: a journey through the Yeltsin era", Columbia University Press: New York, Chichester, 2000.)

The seven claims in detail, according to other sources, like World Bank Data

Checks out, claim is even a tad lower. 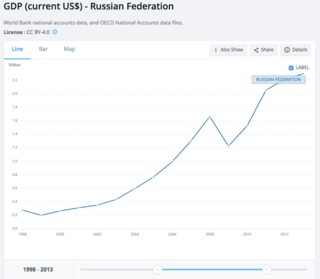 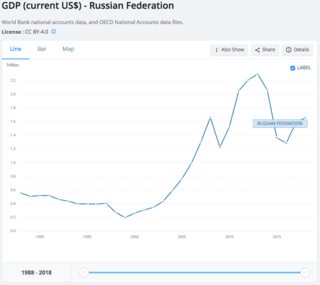 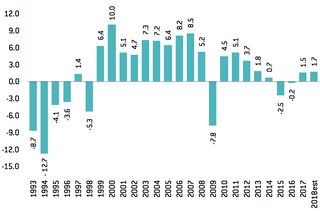 Looks like a big mismatch, but it is unclear whether the meme maker really meant GDP per capita. The numbers semm to suggest that. As seen in the table above:

And per World Bank

Slight mixup, right ball park. But again a convenient cut-off for the stats: 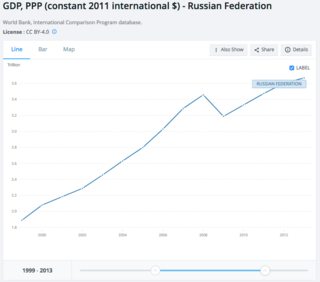 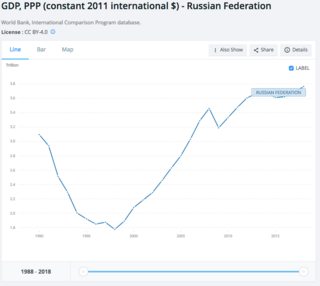 Since this is a weird part of the claim, with unclear provenance of data: yes, inflation was very double digit high at the end of the 1990s and fell to roughly the claimed single digit value. 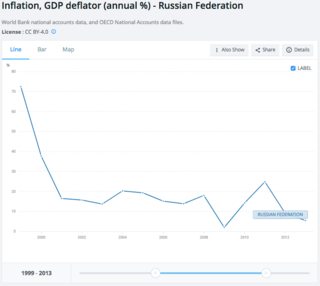 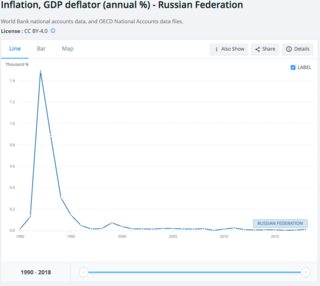 The Central Bank of the Russian Federation gives this official statistic:

Monthly values millions of US dollars 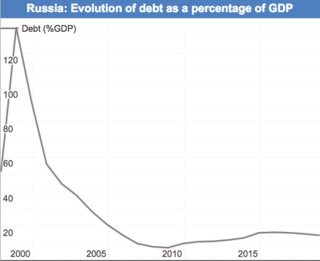 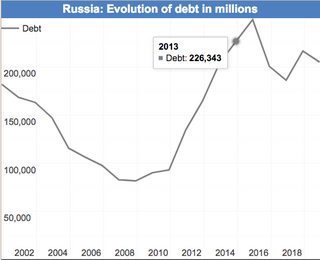 In 1999 the pension system was fundamentally changed, but the need for that was already acknowledged in 1995 and it took until 2002 to get this into the present shape (with further reforms since then):

In 1997, the Presidential Decree on measures to support pensioners’ welfare was aimed at maintaining the well-being of retired persons faced with increases in consumer prices. For the first time in the history of Russian pension legislation this Decree established, as from 1 January 1998, a minimum pension at the threshold of not lower than 80 per cent of the subsistence level for pensioners.

The period from 1995 up to 1997 was characterized by delays in pension payments. This issue, which was vital for 26 per cent of the country’s popu- lation, had grown into a political problem. In 1998 the social and economic situation deteriorated owing to the financial crisis. Nevertheless, pensioners had been paid in full thanks to efforts made by the government and the mobilization of resources carried out by the Pension Fund of the Russian Federation.
–– Dmitri Karasyov & Yuri Lublin: "Trends in pension reform in the Russian Federation: A brief overview", International Social Security Review, Vol. 54, 2-3, 2001. 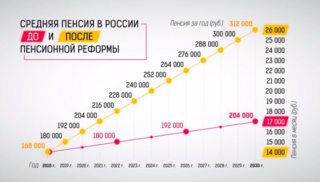 Compared to the meme-claim's numbers in dollars, this is true but a bit deceptive. Binding that back to the meme's 8th claim "Russians approving of Putin", recent polls say that Russians believe a decent pension should be 3 times that amount: 630$ dollar.

Again the problem with rubles conflates an external view on this. From Rosstat comparing pensions, wages and disposable income from the perspective of a Russian:

As with all the numbers above, the ultimate accuracy rating of these depend to a large degree on the time the meme was made. Such popularity polls do not say as much as the meme wants to imply. For sure these approval ratings weren't constant. But the number gives quite the insight into the meme maker and his intentions:

According to public opinion surveys conducted by NGO Levada Center, Putin's approval rating was 81% in June 2007, and the highest of any leader in the world […] Putin's popularity rose from 31% in August 1999 to 80% in November 1999, never dropping below 65% during his first presidency. In January 2013, his approval rating fell to 62%, the lowest point since 2000 and a ten-point drop over two years. Observers see Putin's high approval ratings as a consequence of the significant improvements in living standards and Russia's reassertion of itself on the world scene that occurred during his tenure as President. One analysis attributed Putin's popularity, in part, to state-owned or state-controlled television.

A joint poll by World Public Opinion in the US and Levada Center in Russia around June–July 2006 stated that "neither the Russian nor the American publics are convinced Russia is headed in an anti-democratic direction" and "Russians generally support Putin's concentration of political power and strongly support the re-nationalization of Russia's oil and gas industry." Russians generally support the political course of Putin and his team. A 2005 survey showed that three times as many Russians felt the country was "more democratic" under Putin than it was during the Yeltsin or Gorbachev years, and the same proportion thought human rights were better under Putin than Yeltsin.

After EU and U.S. sanctions against Russian officials as a result of the 2014 pro-Russian unrest in Ukraine, Putin's approval rating reached 87 percent, according to a Levada Center survey published on 6 August 2014. In February 2015, based on new domestic polling, Putin was ranked the world's most popular politician. In June 2015, Putin's approval rating climbed to 89%, an all-time high. In 2016, the approval rating was 81%.

Observers see Putin's high approval ratings as a consequence of significant improvements in living standards, and Russia's reassertion of itself on the world scene during his presidency.

Despite high approval for Putin, confidence in the Russian economy is low, dropping to levels in 2016 that rivaled the recent lows in 2009 at the height of the global economic crisis. Just 14% of Russians in 2016 said their national economy was getting better, and 18% said this about their local economies. Putin's performance at reining in corruption is also unpopular among Russians. Newsweek reported in June 2017 that "An opinion poll by the Moscow-based Levada Center indicated that 67 percent held Putin personally responsible for high-level corruption".

In July 2018, Putin's approval rating fell to 63% and just 49% would vote for Putin if presidential elections were held. Levada poll results published in September 2018 showed Putin's personal trustworthiness levels at 39% (decline from 59% in November 2017) with the main contributing factor being the presidential support of the unpopular pension reform and economic stagnation. In October 2018 two thirds of Russians surveyed in Levada poll agreed that "Putin bears full responsibility for the problems of the country" which has been attributed to decline of a popular belief in "good tsar and bad boyars". a traditional attitude towards justifying failures of top of ruling hierarchy in Russia.

In January 2019 percentage of Russians trusting the president hit the historic minimum –– 33.4%.

On this, I abstain from evaluating the eighth of seven claims promised to be checked here. It is not just a bonus but without an absolute point in time it becomes pretty useless fast to check for these numbers. Let's conclude with "these approval numbers stay quite positive overall, but they also vary a great deal over time."

As requested in comments, some oil prices, although there is more to the Russian economy than oil & gas; a large part of the post-2013 decline or stagnation was not due to declining oil prices but western economic sanctions.

This was strictly not requested for in claim:

Annual Average Domestic Crude Oil Prices from 1946 to the present. Prices are adjusted for Inflation to February 2019 prices using the Consumer Price Index (CPI-U) as presented by the Bureau of Labor Statistics.

Not the answer you're looking for? Browse other questions tagged russia vladimir-putin .

26
Did NATO promise not to expand into Eastern and Central Europe?
50
Did a Russian Orthodox priest sprinkle holy water on Russia's Central Bank's servers?
3
Did Washington Post report US diplomats claiming that Russian agents break in their home and shat on their carpets?
8
Did Putin give this talk about the cultural preservation of European tradition, religion and race?
4
Does Africa have to choose between renewable energy and economic growth?
9
Did the USSR government trade 17 submarines and three warships for three million dollars in Pepsi?