Is Chika Ofili's method for checking divisibility for 7 a "new discovery" in math?

Chika Ofili, a 12-year-old Nigerian boy based in the United Kingdom, has received the ‘TruLittle Hero Awards’ for discovering a new mathematical formula. Source

According to the above website (and several others), he envisioned a simple method to determine if a number is divisible by 7 (which was not included in his textbook), which is amazing on its own!

However, I am bothered by the claim of this being a new mathematical formula.

Is this really new?

The Math.SE question about the method (Why does Chika Ofili's method for checking divisibility for 7 work?) is closed as a duplicate of an earlier, more generic, question (Divisibility criteria for 7,11,13,17,19) about divisibility tests for various prime numbers. The answer by @VitthalJadhav, posted back in 2013 includes Chica Ofili's formula verbatim:

The same technique is mentioned in the article "Puzzles, Pastimes, Problems" (Mathematics in School, Vol. 16, No. 5, November 1987), by D. B. Eperson (kudos to @DavePHD for finding this link):

My alternative test for multiples of 7 is, multiply the units digit by 5, and add this to the number formed by the other digits, and if the sum is a multiple of 7, then the tested number is also the multiple of 7.

So, evidently, this is not a new mathematical formula.

Is this method memorable and easy to use? Yes

Is it cool that 12 year old derived it on his own? Yes, kind of.

Is this a new mathematical formula, discovered in 2019? No, it was posted verbatim on Stack Exchange in 2013.

Is this a new mathematical formula, discovered in 2013? No, another answer by @labbhattacharjee shows the method to derive a formula like this for any number using the basics of number theory, established in XVIII century (works of Bézout, Gauss and many others).

Another, but very similar, method to test for divisibility by 7, is posted all over the internet (1, 2, 3) and was published at least as early as 1889 (Nature volume 40, Some Properties of the Number 7, R. TUCKER):

My attention was recently drawn by a pupil to the following property, which will be best illustrated by working out a particular example:

As a matter of fact, Ofili's teacher acknowledges that "minus 2" method is well known and she found references to it while researching the problem (Chika's Test):

... And furthermore, it works if you double the last digit and then subtract it from the remaining part of the number, of if you multiply the last digit by 9, 16, 23, 30 … and subtract. And actually the doubling and subtracting test can be easily found on the internet.

But we both agreed multiplying the last digit by 5 and adding it to the remaining part of the number is much more appealing! ...

P.S. This reminds me a famous anecdote about Gauss deriving a formula for arithmetic series when he was 7. It wasn't a new formula even in 1780s, but still it was kinda cool that a primary schooler derived it on his own.

This and related divisibility tests are ancient and well-known to most who have mastered a first course in elementary number theory. They go back at least a couple hundred years, and possibly even much further (e.g. possibly to circa 1200 given Leonardo Pisano (b.k.a. Fibonacci) discussed tests for divisibility by 7,9,11 in his Liber Abaci (Book of Calculation))

For example, Dickson's History, v.1 p. 339 cites a general divisibility test credited to A. L. Crelle in 1844 which has the above test as a special case. I quote Dickson in the 4 bold lines below: 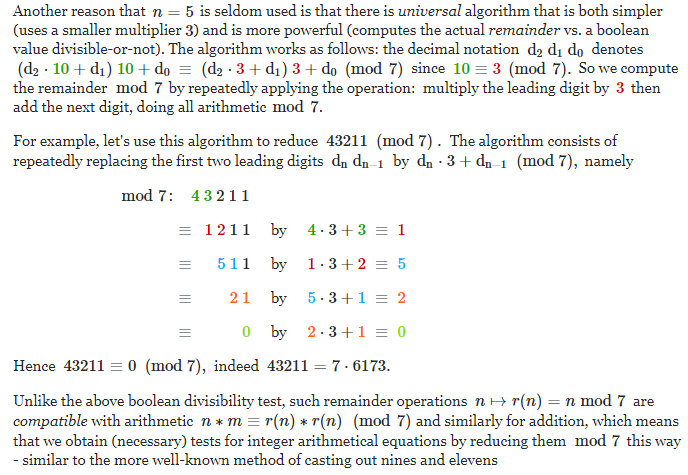 The prior 3 paragraphs are excerpted from one of my math.SE posts, which has further remarks.

Questions about such divisibility tests are FAQs in general-level math forums like math.SE and sci.math. There are thousands of posts discussing such in their archives, including many that explain (in modern language) the above general idea used by Crelle, e.g. here on math.SE. Almost everyone who has mastered a course in elementary number theory knows these ideas well (or could easily derive them if need be).

However, except for a few common cases (e.g. casting out nines and elevens) such divisibility tests generally are not named, nor are they attributed to anyone (which is typical for very old elementary results that are easier to (re)derive than to locate citations for - even more so for results like this that are less useful nowadays given the ubiquity of calculators and computers)

If 12 - 13 year primary school student doesn't know algebra & it recognise pattern in math - develop divisibility test then yes it is invention for him. Is it new discovery in math ? No. Test given by Chika is too old. It is also in BKT's 'Vedic Mathematics' book - Published in 1965. I had given general Theorem (called Cross Divisibility Theorem) to derive divisibility test for any natural number in book
"Modern Approach to Speed Math Secret" published in 2013. 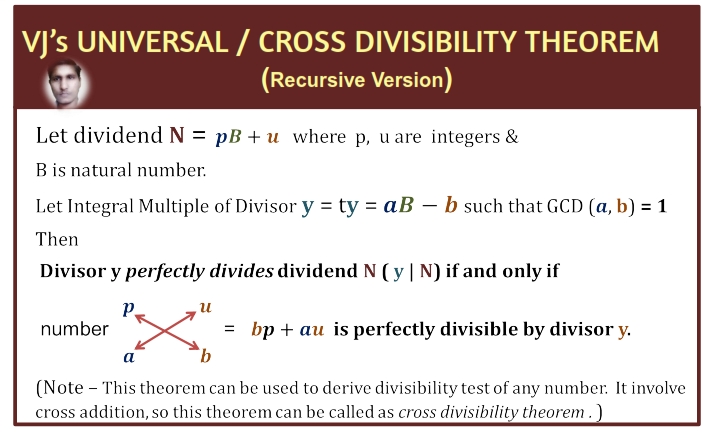 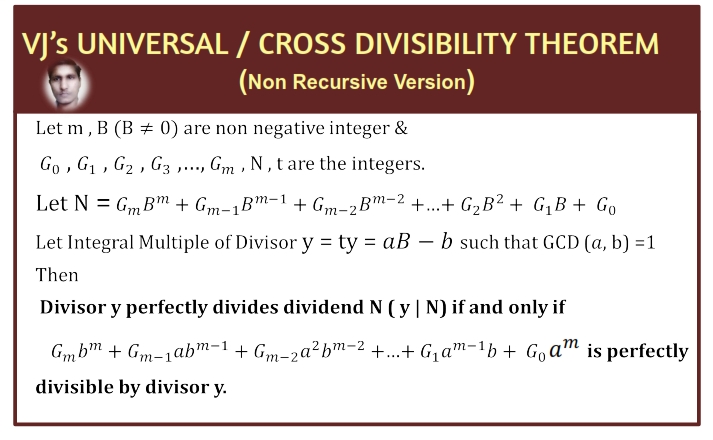