Does the coffee plant use caffeine to kill bugs and surrounding plants?

The HUmans are Free article The Coffee Deception: 13 Little Known Facts About Coffee makes the claim that caffeine in the plant is used to kill bugs and surrounding plants.

1. Caffeine is an alkaloid that the coffee plant uses to kill bugs, which eat its' seeds.

The coffee plant also uses caffeine in the coffee pods to kill surrounding plants, so the coffee plant can attain more sunlight and grow larger. Caffeine is a pesticide, which causes genetic termination in living cells that come into contact with it.

That "caffeine kills insects" is an old myth:

"I find it considerably interesting and even amusing," said Bussey Professor of Biology Carroll M. Williams. "Caffeine may be an insecticide, but it is not a very powerful agent."

The study also determined that caffeine combined with other insecticides increases their killing power. In one test, a small dose of caffine increased a known pesticide's potency by ten times.

The potency of the combination, the report stated, was far greater than that of the sum of the parts.

While caffeine may hold potential for use as an insecticide, a National Coffee Association official said that it is still too early to determine if the new data will have major financial implications.

"It's all good and well, but the really important thing is that the research didn't show caffeine poses a hazard to the public," he added.
–– Christopher J. Georges: "Caffeine Kills Insects, Scientist Says Researcher May Have Found Stimulants' Natural Role", The Harvard Crimson, October 9, 1984.

Caﬀeine is found in a number of plants, principally coﬀee and tea plants, as well as cola and cacao nuts. In plants, caﬀeine functions as a natural pesticide to deter insects.
–– Richard L. Myers: "The 100 Most Important Chemical Compounds. A Reference Guide", Greenwood, 2007. (p55)

And the popular observation is that spiders fed coffee don't weave very well: 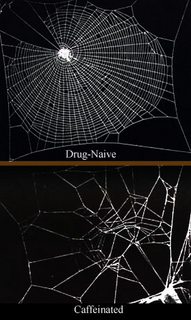 In fact it is found to be listed as

According to these observations, in CO&I arabica the following defence strategy is apparent: tissues with a high risk of predation are preferably protected mechanically. Otherwise a chemical defence system based on purine alkaloids may be established for a limited time. This causes considerable metabolic ‘extra’ costs (Table 1).As a result of growth, however, dilution of the stored purine alkaloids takes place which has to be compensated by a decrease in nutritional value or by mechanical protection. In ageing leaves the purine alkaloids lose their ecological function gradually.
–– Peter M. Frischknecht & Jindra Ulmer-Dufek & Thomas W.Baumann: "Purine alkaloid formation in buds and developing leaflets of Coffea arabica: Expression of an optimal defence strategy?", Phytochemistry, Volume 25, Issue 3, 1986, Pages 613-616. DOI

As this agent alone is just much more harmless: being detrimental to insects in very large doses, but apparently also beneficial in low doses, just like in humans, although the mechanism of action is largely unclear in insects:

In general, caffeine appears to have similar effects on the behavior of invertebrates as those observed in humans and rodent models. However, whether or not caffeine is acting via the same molecular mechanisms is still an open question. Even within the extremely large number of species encompassed by the invertebrate category, almost all of the work was done using the fruit fly and honey bee model systems. Questions regarding the interactions between plants, their herbivores and their pollinators, and issues concerning the ecotoxicity of caffeine suggest that we need a broader understanding of the effects of caffeine across animal phyla.
–– Julie A. Mustard: "The buzz on caffeine in invertebrates: effects on behavior and molecular mechanisms", Cell Mol Life Sci. 2014 Apr; 71(8): 1375–1382. 2013 Oct 26. doi: 10.1007/s00018-013-1497-8 PMCID: PMC3961528, NIHMSID: NIHMS535262, PMID: 24162934

As the claim reads exactly: "Caffeine is a pesticide, which causes genetic termination in living cells that come into contact with it."

we have to conclude that this is an exaggerating mixup. It is based on a demonisation derived from real studies like this:

The problem with inferring too much from that (kind of) study is that it was done with very large doses in vitro. But the coffee plant doesn't produce pure caffeine crystals that kill Drosophila cell lines in a tube.

Caffeine on other plants

Now the effect on other plants seems to be quite the mystery here. Old coffee and coffee trester are often recommended as fertilisers for garden and house plants. With apparently mixed results.

That's because the doses achieved by those methods are bigger than what's 'good'.

As always, different species react differently on exposure to caffeine within their metabolic system.

An overview is presented here:

As general observation it holds true that non-caffeine producing plants are negatively affected during their own germination stage and root formation. Like shown here:

Activity of PPO decreased in response to caffeine, whereas EP content increased significantly indicating its non-utilization and thus less or no root formation. Respiratory ability of rooted tissue, as determined through TTC (2,3,5-triphenyl tetrazolium chloride) reduction, was impaired in response to caffeine indicating an adverse effect on the energy metabolism. The study concludes that caffeine interferes with the root development by impairing protein metabolism, affecting activity of PPO (and thus lignification), and EP content, which are the crucial steps for root formation.
–– Daizy R. Batish et al.: "Caffeine affects adventitious rooting and causes biochemical changes in the hypocotyl cuttings of mung bean (Phaseolus aureus Roxb.)", Acta Physiologiae Plantarum, May 2008, Volume 30, Issue 3, pp 401–405.

So far, little is known about the possible ways to apply caffeine in agriculture. By now we have demonstrated that caffeine implementation on crop seeds could interfere with plant cell division and might inhibit the germination process. Thus, caffeine may be implemented before placing the potato seeds in storage, where inhibition of germination is an additional advantage. Importantly, watering and spraying of sprouts and the whole plants were proven not to interfere with further plant growth and development, so could be applied to agriculture in this form.
–– Wojciech Sledz et al.: "Influence of Exogenously Supplemented Caffeine on Cell Division, Germination, and Growth of Economically Important Plants", in: Jolanta Natalia Latosińska & Magdalena Latosińska (Eds): "The Question of Caffeine", InTechOpen, 2017. DOI

We have to conclude that that is an exaggeration as well. When a coffee plant produces berries it is already large. The amount of caffeine dropped within those to the earth is not released to the ground but within the seeds.

As with any good propaganda, the claim contains many grains of facts that are 'associated with' the truth™. But as the highly entertaining site this claim is from wants to paint caffeine as an all around dangerous substance, especially for those humans irresponsible enough to ingest this satanic stuff, this line of argument falls quite flat.
Going back to the basic facts of the claim and its sub-claims shows that there is little to fear.
Depending on species, insects ingesting a little caffeine may get improved performance and only detrimental effects when the dose gets too large – or there are other substances, like pesticide around having a synergistic effect.
Depending on species and doses again, germination and rooting of other plants is impaired by caffeine – but this is not so much found in a natural growing system with a few coffee berries falling to the ground and growing. It is when coffee grounds or caffeine containing extracts are introduced in too large amounts.

Not the answer you're looking for? Browse other questions tagged plants coffee caffeine .

49
Does a small cup of coffee result in a 45% reduced blood flow to the brain?
2
Does coffee cause fat and cellulite gain?

31
Does music affect the growth of plants?
26
Does tea contain as much ( or more ) caffeine as coffee?
20
Does caffeine later in the day affect quality of sleep?
6
Is there a correlation between coffee (or caffeine) and auditory hallucinations?
4
Does chewing coffee grounds or beans give you more caffeine than drinking coffee?
6
Do some GMO plants provide bigger yields and more efficient use of land?
49
Does a small cup of coffee result in a 45% reduced blood flow to the brain?
2
Does coffee cause fat and cellulite gain?