Is the water used in coal burning power plants "never returned to the environment"?

According to a Duke University press release titled Replacing Coal with Gas or Renewables Saves Billions of Gallons of Water:

Is it true that this water never returns to the environment?

If I'm allowed a little pun on this, it seems the press release uses an America-first definition of environment.

This is a study of water use for power generation in the US.

Despite the shift in source of energy generation, a majority of electricity generation in the U.S. still derives from watercooled systems. Approximately 40% of the total water withdrawn in the U.S. is used for cooling thermal power plants.

Pun aside, the point of the paper is to study how the (local) water supply gets stressed locally by electricity production. And the study does so at sub-national granularity actually. 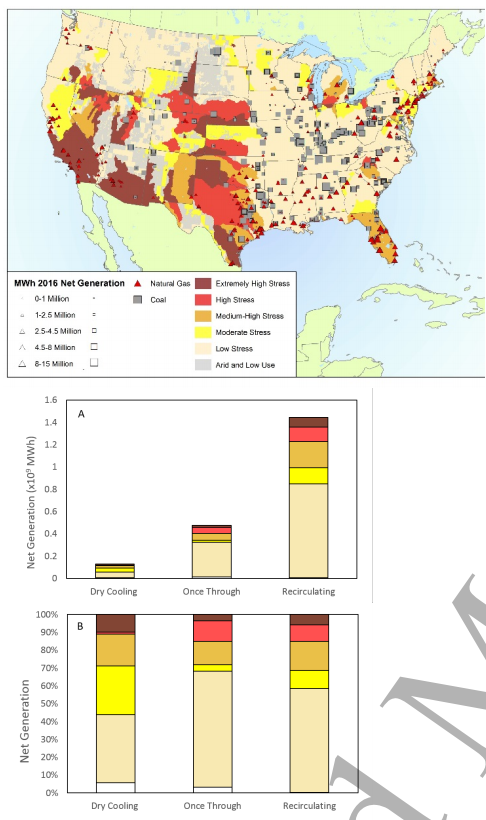 Figure 3: Map of water scarcity and coal and natural gas plants. The amount of 2016 net electricity generation attributed to dry, once through, and recirculating cooling processes for natural gas and coal, sorted by the water-stress status of the plant location in the U.S. (A), and the proportions of generation within each category (B) (2, 3, 14). Colors within each bar show how much of the net generation took place in water stressed areas. In 2016, almost all generation using dry cooling applied for natural gas plants, while a majority of generation using once through cooling applied for coal plants.

As far as I can tell, the paper doesn't bother at all to model or even mention where the water [that power plants use] "ends up", i.e. there's not even a quantification of the immediate fate of the water used for cooling, after it leaves the power-plant site.

Also, the paper itself, unlike the press release, never even uses the word "environment" (well, outside the journal name and citations).

So, the press release used a weirdly narrow definition of "environment" (in that "return" statement) by which they basically mean the conventional source(s) of water typically exploited, i.e. "aqueducts".

107
Do coal plants release more radiation than nuclear power plants?
11
Would an EMP in the US Cause all of our active Nuclear Power Plants to melt down and explode?
8
In the U.S., is more water used for electric generation, and more electricity used for water infrastucture, than anything else?