Are dog silhouettes effective at keeping geese away?

Canada Geese are a big nuisance where I live (despite living several hours away from Canada). To keep them away, I've seen more and more places put down black wooden dog silhouettes like this one from the New York Times: 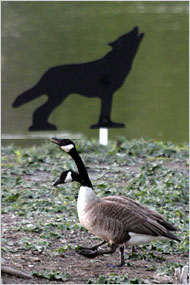 Some of them look more like coyotes or wolves, some move in the wind, and still others are manually moved (because it's supposed to make sure they stay effective: more information on setups can be found on the site of a seller of such silhouettes). There was also one place near me that had realistic-looking plastic/rubber foxes — not silhouettes — which were eventually thrown out because they apparently didn't work.

This makes me wonder: Are dog silhouettes an effective way to keep geese away?

The New York Times gives one example pointing towards (at least a specific type) being effective:

"[Canada Geese] would sit in the water and ruin the fish pond and the vegetables," he said. "We had to clean the walkways twice a day." But once the wolf figures were placed on the lawn, Mr. Salajka said, the geese left.

"It was like a miracle," he said. "The next day, none of them landed."

The wolf figures have been 95 percent effective since September, Mr. Salajka said.

18
Are some breeds of dog inherently dangerous, despite training?
3
Can a dog remember 1400 names of toys?
20
Does a dog provide a reasonable deterrent against house theft?
18
Did Heineken knowingly sponsor a dog fighting event?
22
Do cats like keeping warm on car tyres in winter?
3
Are dogs excellent wingmen?
36
Do old dogs run away to die?
11
Does this dog food double the lifespan of dogs?